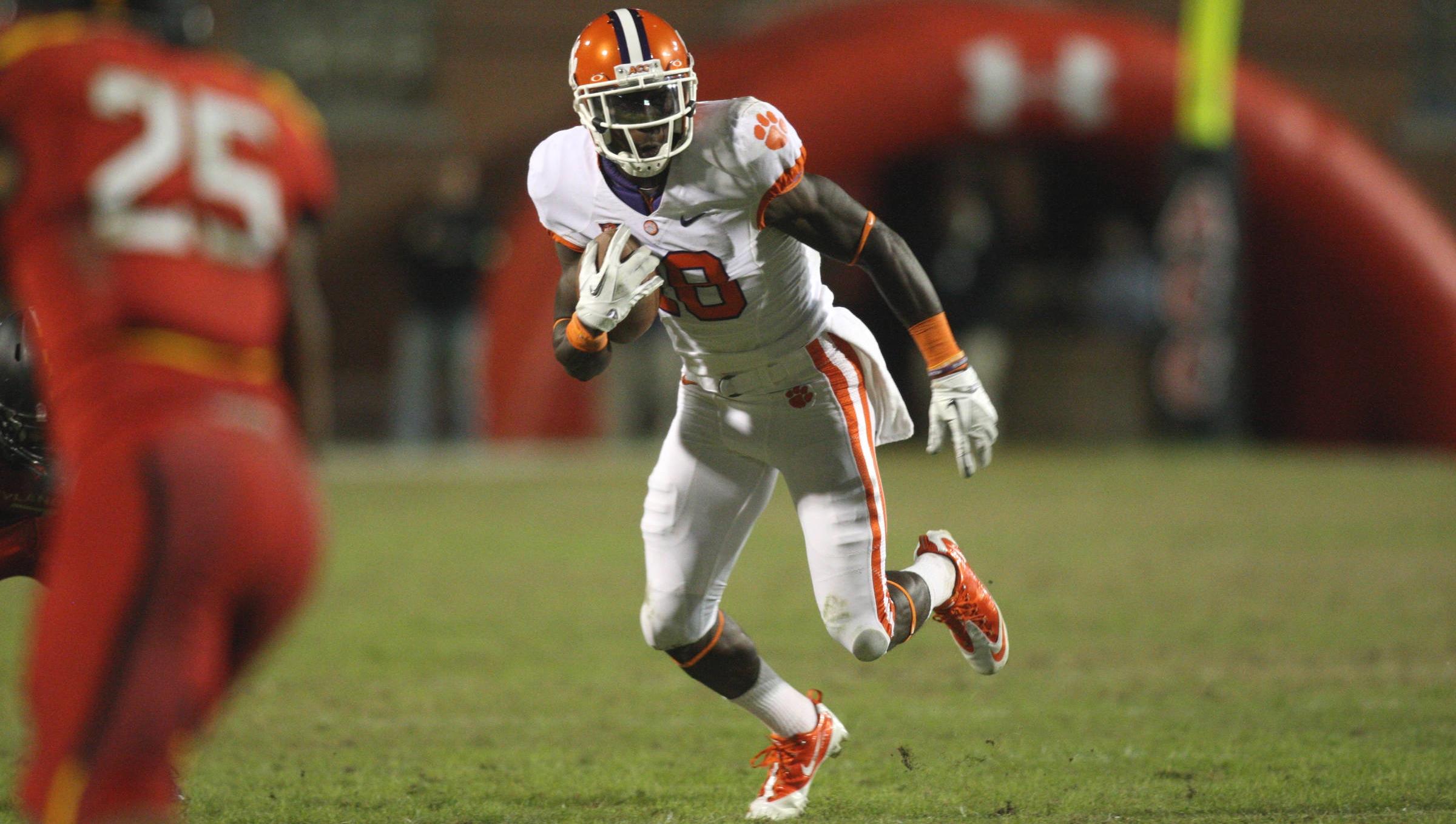 Football Game Program Feature: “What Can Brown Do For CU?”

By Hannah BurlesonIt is easy for college football players to be selfish and want to win as many personal awards and receive as many accolades as possible to further themselves.  Jaron Brown is not one of those players.  For Brown, a graduate student from Cheraw, SC, it is all about doing what he can to help his team win.

“I just want to make plays,” said #18.  “Whenever my name is called, regardless of the down, I want to deliver.  I have adapted to this role.  As a senior, I want to take it to the next level and do anything I can to help my team win.”

During a visit to Death Valley as a senior in high school, Brown discovered his love for Clemson.

“When I came for a visit in 2008, I saw that it was a family atmosphere.  I felt that from both the players and the coaches.  I came on the big recruiting weekend with guys like Jamie Harper, Antoine McClain, Brandon Ford, Andre Ellington, and some other Clemson guys, and I loved it.”

Brown was a part of the 2008 recruiting class, a group that was rated #2 in the nation by ESPN.com.  It included the aforementioned players, plus Da’Quan Bowers, who was rated as the #1 player in the nation, and Dwayne Allen, who would go on to win the John Mackey Award as the nation’s top tight end.

Brown enrolled at Clemson with plenty of experience, having led his Cheraw High School team to state titles as both a junior and senior.  His stellar senior campaign did not go unrecognized, as he received all-state, all-region, and all-area honors and was named AA Player-of-the-Year by High School Sports Report.

Brown red-shirted his first year, but contributed to the team in 2009.  The 6’2″ wideout had 30 yards on three catches in 11 games on the team that became the first to win the ACC Atlantic Division title.

His role continued to grow in the 2010 season.  Brown had an impressive year, as he racked up over 405 yards and three touchdowns on 32 receptions.  He played 12 games, starting 10, and was on the field for 535 snaps.  He was second on the team in receiving yards.  His consistent play was evident, as he had a catch in all 12 games.

His play was impressive and his impact was evident in a 30-10 win at Wake Forest, where he scored on a 40-yard touchdown catch with 46 seconds to go in the first half.  He totaled five catches for 93 yards in the contest and was named team offensive player-of-the-game by the coaches.

Once again, Brown’s biggest performance came in a win over Wake Forest.  The November 12 game in Death Valley saw Sammy Watkins go down with an injury, but Brown was there to step in.  He led the team with six receptions for a game-high 78 yards and a touchdown that tied the score in the fourth quarter.

“That was a fun game,” recalled Brown.  “Sammy went down and a lot of guys had to step up, but we prepare for that moment in practice.  I wanted to go out there and make a play.  Tajh threw some great balls and he was hitting receivers right in the hands, so I had to go over there and catch them.  That’s the thing you have to do when your number is called…go down and make the play.”

That was a significant day for the Clemson program, as the Tigers clinched the ACC Atlantic Division title for the second time in three years with a 31-28 victory over the Demon Deacons.

This season, Brown’s expectations for himself and the team are higher than ever.  “Our team goal is to go undefeated and win the National Championship.  We also want to defend the ACC title.

“I definitely would love to relive that moment…it was the highest of the highs.  That’s why I want to work so hard to get back there this year.  Personally, I want to become a complete receiver and get better at knowing the game, inside and out.”

Brown is also confident in this year’s receiving corps and believes the sky is the limit for this young, but talented group.

“At the wide receiver position, we have a lot of young guys who do a good job of stepping up.  We have hard-working and humble guys.  It’s fun to go out there and compete against each other.  It’s definitely friendly competition.  We know we are competing for a spot and a chance to help our team win.”

Brown embraces his role as an older player on the team.

“I try to provide leadership for the wide receivers, the offense, and the team as a whole.  I really try to be a motivator and am trying to have fun my senior year.”

He also credits the younger receivers with pushing him.

“It has been a lot of the younger guys being my role models,” he admitted.  “The receivers are a great group to be around.  ‘Nuk’ (Hopkins), Sammy (Watkins), Charone (Peake), Martavis (Bryant), Adam (Humphries)…I joke with them on and off the field.  We are a really close group.”

Although Brown is a vocal leader on the team, during the game, he likes to let his play speak for itself.

“I look up to Calvin Johnson and Larry Fitzgerald.  I love the way they are able to take over a game and you don’t hear much about those guys off the field.  They have no off-the-field issues.”

Reflecting on his journey to Clemson and his playing career, Brown is simply gracious.

“With this being my last season, I’m a lot more mindful of everything in the world, and as football is coming to an end, I am having to think about things after football.

“I’m really thankful that Clemson gave me the opportunity.  I want Clemson fans and my teammates and coaches to remember me as a guy who loved the game of football.”