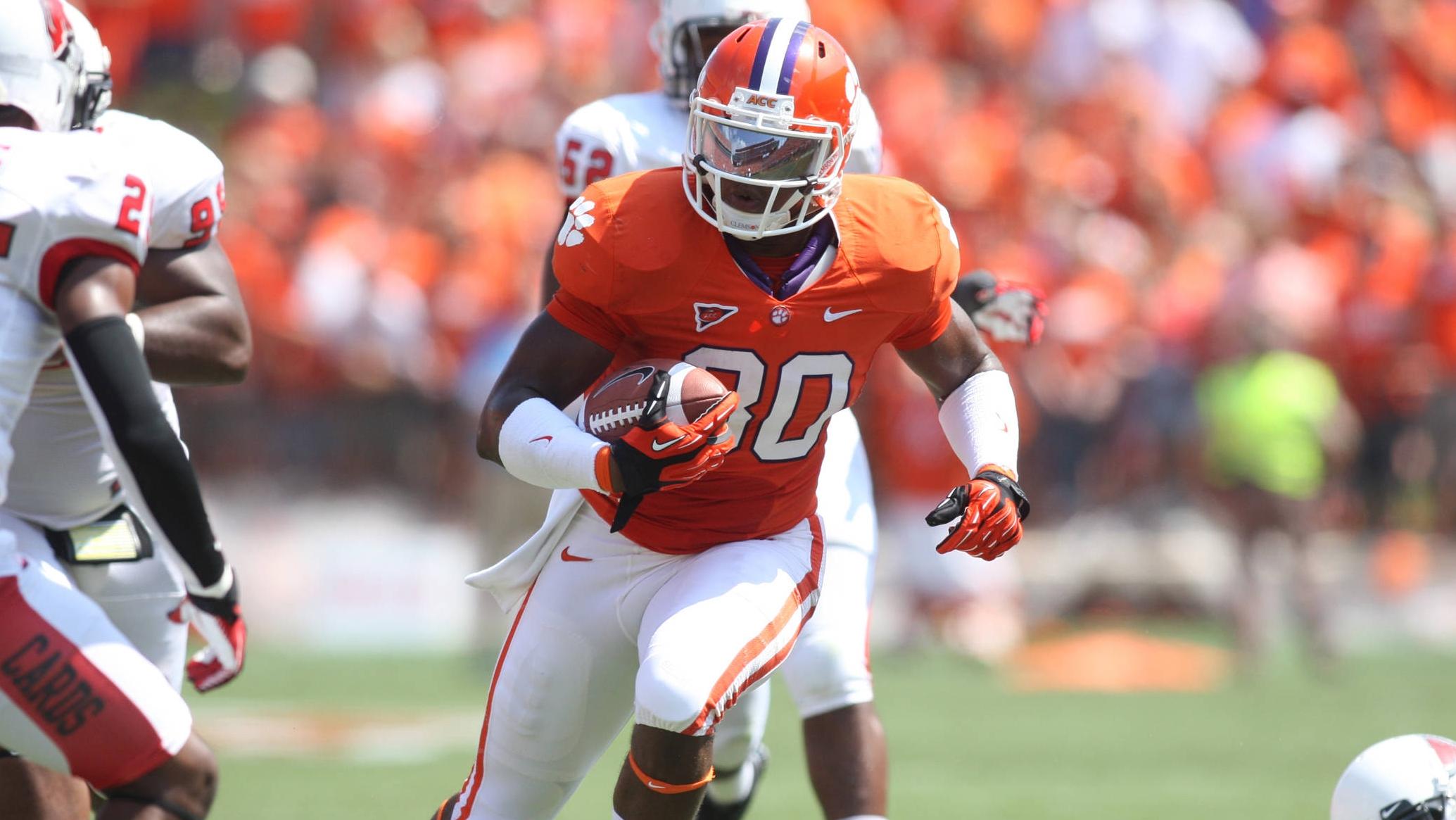 Football Game Program Feature: “Up to the Challenge”

By Schuyler EasterlingFor most Southerners, the love affair with the game of football begins at an early age, develops into an unrivaled passion, and becomes an integral fixture of life.

When it comes to Clemson graduate and starting tight end Brandon Ford, the same generalization can be applied.  Hailing from Wando, SC, Ford grew up in a sports-loving family and first began throwing the football around as a little boy.

“It all started when I was eight,” said a smiling Ford.  “My older brother, older cousins, and I all began playing football in the backyard.  Those days were some of the best times that I remember.

“Every day we’d head outside and play football.  It didn’t matter if it was hot, rainy, cold, or windy, we’d be outside ready to throw the ball around at eight in the morning.  It was something we did and all loved.

“Growing up, I was honestly the worst player out of the family, because everyone was taller, bigger, and stronger.  But as time went on, I kept getting better and better.

“When the rest of my family grew tired of playing around in the backyard and headed inside, I always wanted to keep going.  I’d be out there by myself until my older cousin would finally head outside and throw the football to me over and over.

“Eighty yards separated my house and my grandmother’s house, and we used that space as our football field, with the tree and the house marking the endzones.  It was the perfect setup.  We’d play out there for hours.

“Even when my grandfather dug a trench for a septic tank in the middle of our makeshift field, it didn’t stop us from going outside to play football.  We’d just hurdle the trench and race for the endzone.”

Fast forward over a decade and Ford has traded hurdling trenches in the backyard for linebackers and defensive backs as the starting tight end for the 2012 Tigers.  But for Ford, the journey from Wando to Death Valley was one that almost did not happen.

“Although I got started early playing football, my first love was basketball and I firmly believed I was set for a career in the sport,” admitted the 6’4″ Ford.  “Although I loved football, playing in high school hadn’t really crossed my mind.  I was focused on basketball and my dream was to play in the NBA.  However, my focus all changed thanks to one man.

“Our high school football coach, Jeff Cruce, was an offensive lineman on Clemson’s 1981 National Championship team.  The man absolutely lived and breathed Clemson.  He recognized my potential talent in football and showed me the pros and cons of playing and that my height/weight was more suitable for a career in football.  It was because of Coach Cruce that I started playing football in the 11th grade and I got to be pretty good.  I still did well on the basketball court and loved being there, but I realized football was the sport for me.”

Under Cruce’s guidance, Ford developed into a lethal wide receiver on the gridiron.  Despite his decision to take on football for the first time during his junior year of high school, Ford learned quickly and was a natural football star.

In the two years that he played football for Hanahan High School, he rose to become one of the top prospects in the Palmetto State.  In his senior campaign, Ford totaled 76 catches for 1,702 yards and 22 touchdowns, leading the state in receiving yards and touchdowns.  He was also third in the nation in receiving yards.

Ford also received the honor of being an all-state selection and represented the state in the Shrine Bowl.  After just one year on the team at Hanahan High, programs from across the country began scouting the dominant and physical wideout.  Recruitment letters began to pour into the Ford household.

“When I started getting letters from different schools, I was shocked,” recalled Ford.  “I’d never gone through anything like this before and I was a little overwhelmed.  Coach Cruce kept telling me to enjoy the ride, but to keep my eyes on Clemson.

“When he’d talk about Clemson, I could see how much he loved it.  Coach Cruce promised me if I just got on campus that I would see why the place is special.  At the time, I had been set on attending the University of Georgia, but one of my Shrine Bowl teammates, A.J. Green, had already committed to the Bulldogs.

“A.J. and I were the top two wide receiver recruits from South Carolina, so I wanted to choose a different school to set myself apart and build my own career.  When I finally visited Clemson, I loved it.

“Clemson was the first to offer me a full scholarship and it meant a lot to me that they recognized my talent before anyone else.  I made my commitment to Clemson before my senior football season started.

“I liked being able to play close to home, and when I made my decision, I felt strong about it.  I knew Clemson would shape me into a man, be my family, and teach me valuable lessons that I would keep with me for the rest of my life.  I stuck with the Orange & White, and it’s something I’ve never regretted.”

Since arriving on campus in the fall of 2008 and red-shirting his first year, Ford has transitioned from wide receiver to tight end and served as one of Clemson’s most valuable backups, biding his time for a chance to shine in his final year.  Time and time again over the past four years, Ford has proven to the Clemson coaching staff that when provided the opportunity, he can deliver.

In 2010, Ford was the team co-winner of the 12th Man Offensive Award, totaled 10 receptions for 78 yards, had at least one reception in six of the last seven games, and had the distinction of being the first Tiger in history to have two receiving touchdowns in a bowl game (Meineke Car Care Bowl against South Florida).

In 2012, Ford has returned to Death Valley for one last season, determined to help lead Clemson to a second-consecutive ACC Championship.

“Our mission is to win it all.  Every year our goals remain the same…win the opener, the state championship, and the ACC title.  Our ultimate goal is to finish as the best team in the country and win the BCS National Championship.

“I don’t concern myself with individual goals.  Whatever I have to do on gameday to help our team is what I’ll do.  I want to be remembered as the guy who gave his all for Clemson.  If that means I win the Mackey Award, then so be it.  At the end of the day, if this team is winning, then all of my goals are accomplished.”

Ford graduated from Clemson this past May with a degree in sociology.  He has excelled on the field as well as in the classroom as a three-time member of the ACC Academic Honor Roll.

“I am so thankful for the opportunity to play football and attend Clemson,” added Ford.  “God has guided me here and to Him goes the credit.  My family has also been so good to stick by me and love me no matter what, and I couldn’t have graduated without them.

“No matter what happens following this season, I know I’m blessed to be a Tiger for life.”

For Ford, this 2012 football season will be one last hurrah and a chance to carry the Clemson mantle and add to the luster that has long been a hallmark of Tiger tight ends.  No longer waiting in the wings, it is #80’s time to dazzle in Death Valley.  And if the past four years have proven anything, he is more than up to the challenge.