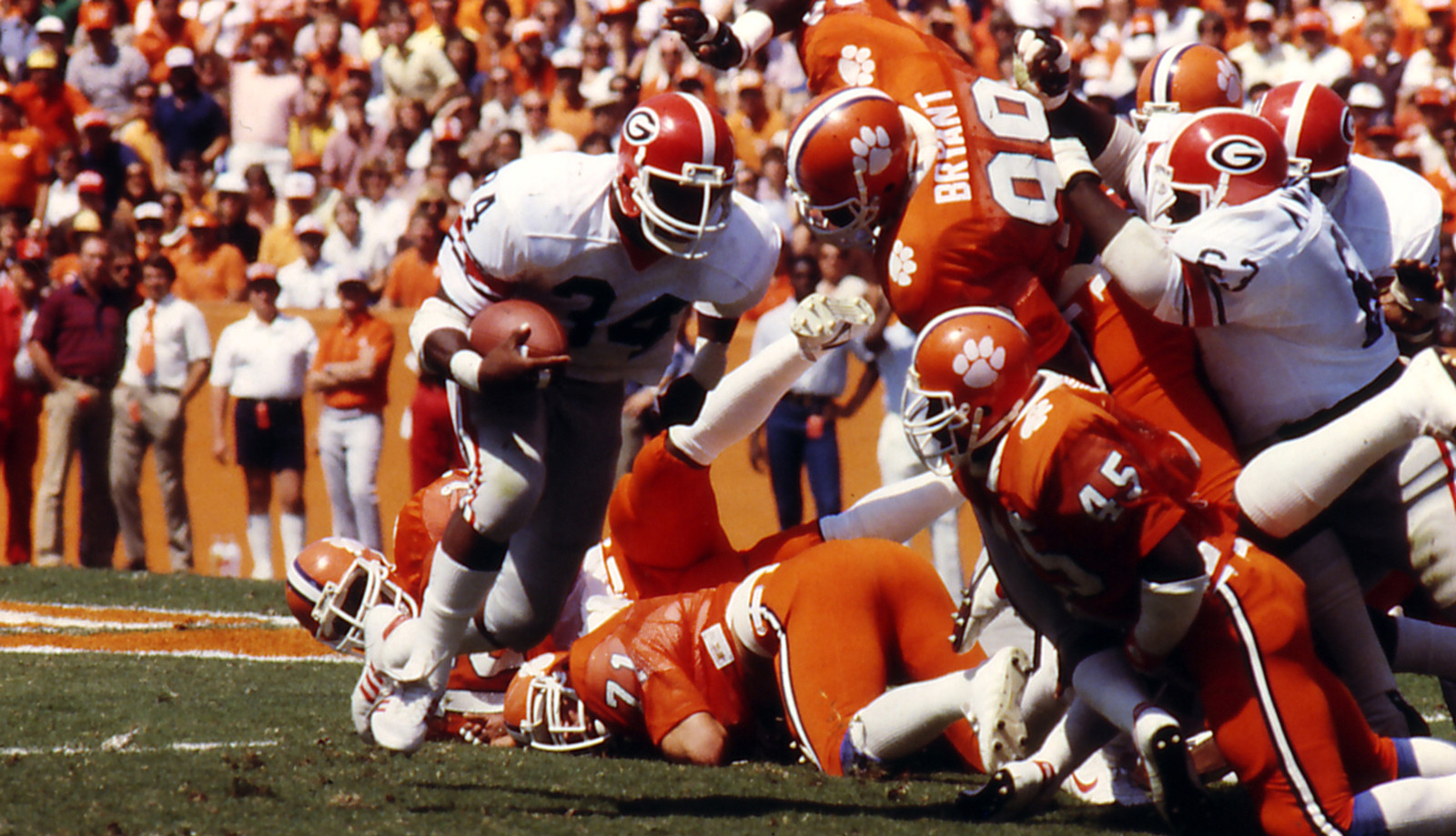 HATCHER vs. NEWSOME1984 Wake Forest GameYou might find it unusual that a pair of punters are on this list, but it was an unusual situation. Clemson’s Dale Hatcher and Wake Forest’s Harry Newsome were high school teammates and classmates at Cheraw (SC) High School in 1981.

Hatcher was the starting punter for the Braves and Newsome was second string. However, Newsome showed his ability once he arrived at Wake Forest. He finished his career with a 43.6-yard average, still ninth-best in ACC history. Hatcher averaged 42.8 yards per punt for the Tigers and is still 13th.

This 1984 Clemson vs. Wake Forest game was the final matchup of the two punters at the college level (they would later compete in the NFL). Hatcher had just two punts in the game Clemson won 37-14, but he averaged 57.5 yards per punt. Newsome averaged 44.2 yards on six punts, but he had a punt blocked by William Perry when the lineman pushed the Wake Forest up-back into Newsome.

Both Hatcher and Newsome went on to punt for many years in the NFL. Newsome played nine years in the NFL and averaged 42.5 yards per punt. He led the NFL in punting in 1988 and once had an 84-yard punt.

WHITEHURST vs. SCHAUB2003 Virginia GameTwo future NFL quarterbacks battled in an overtime game at Clemson in 2003. Clemson sophomore Charlie Whitehurst and Virginia senior Matt Schaub, the reigning ACC Player-of-the-Year, took their respective teams up and down the field for four quarters.

Whitehurst directed Clemson to a 10-0 lead at halftime, as he connected with Derrick Hamilton on a 19-yard scoring pass. The Tiger defense, led by Leroy Hill, shut down Schaub and his short passing game.

However, Schaub responded in the third quarter with a 17-0 run, as he threw two touchdown passes, including one to tight end Heath Miller, who has also gone on to a long NFL career.Clemson had a 24-17 lead before Schaub led the Cavaliers on a masterful two-minute drive to a tying touchdown with just 57 seconds left in the game.

In overtime, Virginia had the ball first and the Cavaliers could only muster a field goal. Then on Clemson’s possession, Whitehurst hit Kevin Youngblood in the corner of the endzone from four yards out for the walkoff touchdown.

ADDISON vs. DAVIS1966 Virginia GameOn the first day that Howard’s Rock was mounted on the top of the Hill, Clemson and Virginia staged one of the great games in the history of Death Valley. And the play of the two quarterbacks made it that way.

Clemson’s Jimmy Addison led the Tigers from 17 points down late in the third quarter to a 40-35 victory, at the time the greatest comeback in Clemson history. Addison finished the day 12-19 passing for 283 yards and three touchdowns. He completed six of those passes for 120 yards to Wayne Bell.

Meanwhile, Bob Davis completed 26-48 passes for 312 yards and two touchdowns to lead the Cavaliers. In an era when running was the staple of most offenses, Clemson and Virginia each passed for at least 300 yards, the only game that happened in Memorial Stadium before 1998.

Davis set the ACC record for completions in a game and also registered 40 yards on the ground for 352 yards of total offense.

But in the end, it was the Tigers who claimed the upper hand, as Addison completed a 75-yard pass to Jacky Jackson with 3:49 left in the game to seal the victory.

Dantzler completed 18-30 passes for 220 yards and added 103 yards on 25 carries, his fourth straight game with at least 300 yards of total offense and at least 100 rushing yards.

Rivers completed only 21-48 passes, but he passed for 370 yards and three touchdowns without throwing an interception.

Clemson had lost 13 consecutive games decided by a touchdown or less, so Tiger fans were a bit nervous when N.C. State took the ball back with three minutes left and trailing 34-27.However, Charles Hafley deflected a fourth-down pass by Rivers at the Clemson 18 in the final seconds to preserve the victory.

LONG vs. AGNEW1989 N.C. State GameStacy Long earned his All-America status on this day in 1989. A junior at the time, Long was having a solid year as a run blocker, but N.C. State had the best defensive lineman in the ACC in Ray Agnew.

The Wolfpack had a 6-0 record and a #12 national ranking entering the game.

Long had seven knockdown blocks and graded 82 percent in his head-to-head battle with the eventual ACC Defensive Player-of-the-Year. He had key blocks on two Clemson touchdowns in the first quarter, a nine-yard run by Wesley McFadden and an 11-yard run by Joe Henderson.

The Tigers were victorious 30-10 in front of a national television audience and 81,569 fans. The victory moved Clemson back into the top 20 and it gave the Tigers momentum, as they did not lose the rest of the season to finish #12 in the AP poll.

HORNE vs. WARRICK1997 Florida State GameThis is the only game in the history of Death Valley that two opposing players combined for over 600 all-purpose yards. On this warm afternoon (93 degrees at kickoff), Florida State wide receiver Peter Warrick gained 372 all-purpose yards, the most against Clemson in any venue in history.

It was the first big game for the sophomore, who would go on to lead Florida State to the 1999 national title. Warrick had a 90-yard punt return and an 80-yard touchdown reception. For the day, he had 249 receiving yards (most ever against Clemson) and 123 punt return yards.

Clemson wide receiver Tony Horne nearly kept pace with 10 receptions for 131 yards and a touchdown along with 109 kickoff return yards, including a 77-yarder that set up a score. It was like watching a heavyweight fight, as the two receivers made big play after big play.

The two teams combined for only 72 rushing yards, but they had 617 combined passing yards. Florida State won 35-28, but the 80,939 fans in attendance were on their feet most of the game thanks to the performances by Horne and Warrick.

BOYD vs. TRICKETT2011 Florida State GameThis game was certainly not billed as a great individual matchup. Florida State quarterback Clint Trickett was substituting for an injured EJ Manuel and had not seen much action in his college career prior to this contest.

However, he responded like a coach’s son, which he is, connecting on 24-38 passes for 336 yards and three touchdowns.

Clemson’s Tajh Boyd was coming off a 386-yard passing performance in a victory over defending National Champion Auburn, and that was the second-highest passing yardage total in Clemson history at the time. On this Saturday against the #11 Seminoles, he nearly duplicated the numbers by completing 22-35 passes for 344 yards and three touchdowns.

A look to the history of games in Death Valley shows that it is the only game in which two opposing quarterbacks both passed for at least 330 yards and three touchdowns.

Clemson held a 35-30 lead late in the game when Florida State had the ball near midfield, but Tiger defensive tackle Rennie Moore sacked Trickett on fourth down, allowing Clemson to take over the ball and run out the clock for the victory.

PERRY vs. SMITH1984 Virginia Tech GameClemson and Virginia Tech had two of the top defensive linemen in the nation in the 1984 season. William Perry was Clemson’s senior middle guard who was completing the only three-time All-America career in school history.

Virginia Tech’s Bruce Smith was just as impressive and on his way to being a top NFL draft pick.

Both giants were at their best at Clemson on this November afternoon. The Tigers won the contest by a score of 17-10, as Clemson held Virginia Tech to only 79 yards on 44 carries.

But a look to the stats tells us that another defensive lineman actually had a better day, Clemson freshman Michael Dean Perry. The younger Perry had 10 tackles, three tackles for loss, and two sacks.

While William Perry and Smith were both first-round draft picks the following spring, Michael Dean would go on to a six-time Pro Bowl career with Denver and Cleveland.

The Tigers were led by Steve Fuller, who later became a member of the 1985 Chicago Bears’ team that won the Super Bowl title.

Fuller led the Tigers to a 17-7 lead entering the fourth quarter and had the better stats for the afternoon. The junior signal-caller completed 13-20 passes for 185 yards along with 51 yards on 16 carries and a touchdown. That gave him 236 yards of total offense compared to 163 yards for Montana.

Montana was 9-21 passing, but those passes went for 172 yards, good for 19.1 yards per completion. Montana also rushed for two short touchdowns, including what proved to be the game-winner with 7:11 left in the game.

The Fighting Irish were victorious by a score of 21-17, but Clemson gained in terms of national attention by its performance. It was Notre Dame’s only close game in its last six contests on the way to the 1977 national title.

DAVIS vs. WALKER1981 Georgia GameThe battles between Clemson and Georgia between the 1977-87 seasons were legendary, physical contests. They were personified on the personal level in the matchup between Clemson linebacker Jeff Davis and Georgia running back Herschel Walker in 1981.

Davis was the emotional leader of Clemson’s defense, and he averaged nearly 14 tackles per game during the 1980 and 1981 campaigns to back it up. Walker had just led Georgia to the National Championship as a freshman during the 1980 season.

Georgia came to Clemson riding a 13-game undefeated streak and a #4 national ranking. Clemson needed a victory over this prominent program just down the road in Athens, GA to move into the national picture.

It was the fierce, hard-hitting game you would expect. Walker ran well overall with 111 yards on 28 carries, but he never reached the goal line. He also fumbled twice, two of Georgia’s nine turnovers, still the most forced by a Clemson defense in history.

Davis finished the contest with 11 tackles, including a team-high nine first hits, and also recovered a fumble to lead the Tiger defense.

Clemson went on to win the National Championship that season, and this key victory over the Bulldogs started the momentum towards that title.

It ended up being the only regular-season loss of Walker’s college career as a Bulldog.