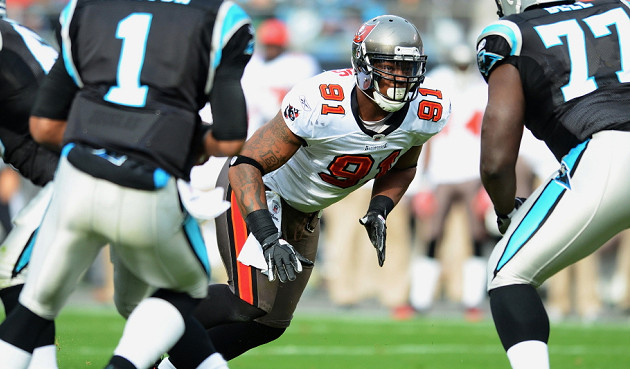 DWAYNE ALLENTE – ColtsIn the NFL: In his rookie season…has started all nine of the Colts’ games this season…has 25 receptions for 280 yards and two touchdowns…his first career reception went for a score against Minnesota on September 16…had a season-high six catches for 75 yards in the win over Miami…drafted in the third round by the Colts in the 2012 draft.

At Clemson: John Mackey Award winner in 2011…consensus first-team All-American in 2011…First-Team All-ACC selection in 2011…played 41 games and made 33 starts…Second-Team All-ACC in 2010…finished his career with 93 receptions for 1,079 yards.

THOMAS AUSTINOL – PanthersIn the NFL: In his third season and the second year he has been on an active roster as an offensive lineman…signed a free-agent contract with the Panthers on October 11…active for the Panthers’ games on October 28 and November 4, but did not play…started 2012 as a member of the New England Patriots’ practice squad…played three games for the Houston Texans in 2011.

At Clemson: Third-team All-American by Sporting News in 2009…Second-Team All-ACC in 2009…Second-Team All-ACC center in 2008…had 316 career knockdown blocks, including a team-high 112 as a senior…started each of the last 38 games…named ACC Offensive Lineman-of-the-Week five times in his career, tied for fourth in total player-of-the-week selections in Clemson history and tied for most among offensive linemen…co-captain of the 2009 team.

Da’QUAN BOWERSDE – BuccaneersIn the NFL: In his second year, both with Tampa Bay…spent the opening weeks of 2012 on the physically-unable-to-perform list, but has returned to the field…had two tackles for loss and a sack against Oakland on November 4…played 16 games as a rookie in 2011…tallied 30 tackles and 1.5 sacks in 2011…had five tackles for loss in one game, an all-time record for a former Tiger in the NFL.

ANDRE BRANCHDE – JaguarsIn the NFL: In his rookie season…has played all nine games (three starts) for the Jaguars…has 10 tackles and one sack…had a sack, caused fumble, and recovered fumble against Green Bay on October 28…picked in the second round of the 2012 draft.

At Clemson: Second-team All-American according to multiple media outlets…First-Team All-ACC selection in 2011…led the ACC in sacks in 2011…Senior Bowl invitee in 2011…permanent team co-captain for 2011…one of six finalists for the Hendricks Award in 2011…ended his career with 197 tackles and 17.5 sacks…graduated on December 22, 2011 with a degree in sociology.

CREZDON BUTLERCB – BillsIn the NFL: Chosen in the fifth round of the 2010 NFL draft by the Steelers…claimed off waivers by the Arizona Cardinals early in the 2011 season…signed with the Buffalo Bills in November of 2012.

At Clemson: Three-year starter at cornerback…Clemson finished in the top 15 in the country in pass defense during all three seasons that he was a starter…started each of the last 40 games; he and Chris Chancellor started 40 games together at cornerback…tied for second in Clemson history in career interception return yards (243).

CHRIS CLEMONSS – DolphinsIn the NFL: In his fourth season, all with the Dolphins…has started all nine games for the Dolphins this season…has 51 tackles and two interceptions in 2012…had a career-high 10 tackles against Saint Louis on October 14…has played 49 career games (25 starts).

At Clemson: Had 323 tackles and five interceptions from 2005-08…started every game each of his last three years…only player in Tiger history to register a tackle in every game over a four-year career…part of a defense that finished in the top 25 in the country in total defense, pass defense, and scoring defense from 2006-08…earned his undergraduate degree in 2008.

At Clemson: Finished his career with 313 tackles, second-most among active ACC players at the end of the 2009 season…Clemson’s top tackler each of his last two seasons (2008,09) in a Tiger uniform…registered 111 tackles in the 2009 season to lead the team…finished his career with 43 career tackles in four bowl games, including 15 against Auburn in the 2007 Chick-fil-A Bowl and 15 against Kentucky in the 2009 Music City Bowl…never missed a game; he played 53 in a row to tie a Tiger record at the time.

NICK EASONDT – CardinalsIn the NFL: In his 10th season…longest-tenured former Tiger in the NFL…in his second season with the Cardinals…has played all nine games this season…made one start on September 30 against Miami…has recorded five tackles and one sack in the 2012 season…won a Super Bowl Championship ring with the Pittsburgh Steelers in 2009…also played for the Cleveland Browns and Denver Broncos.

At Clemson: First-Team All-ACC selection in the 2002 season when he registered 64 tackles and seven sacks as a defensive tackle…strength All-American as a senior…in the top 20 on the Tiger career sacks list (15)…played in the Senior Bowl in 2003…five-time winner of the ACC Top Six Award, given to student-athletes who exhibit extraordinary community service; he is the only five-time winner in Clemson history…earned his marketing degree in 2001, then earned his graduate degree in 2003.

JACOBY FORDWR – RaidersIn the NFL: On the injured-reserve list for 2012, which means he will not play this season; he suffered a foot injury in September…played just eight games with three starts in 2011 due to injuries…played all 16 games as a rookie in 2010 while starting the final nine games…set a franchise single-season record with three kickoff-return touchdowns in 2010.

At Clemson: One of Clemson’s best all-purpose players in history…he and C.J. Spiller finished as the NCAA’s greatest all-purpose duo in history with a combined 11,671 all-purpose yards…seventh in Clemson history in career receptions (143)…had 1,986 career receiving yards, ninth-most in school history…had 16 career touchdown receptions…had at least one reception in 29 straight games to close his career…had eight career touchdowns of 50 yards or more, second-most in Clemson history behind Spiller…joined Spiller as one of two Tigers in history to account for a touchdown five different ways…an All-American and National Champion in track…won the NCAA title in the 60m indoors in 2009…had a streak of 18 straight wins in the 60m and 100m during the indoor and outdoor season.

MARCUS GILCHRISTDB – ChargersIn the NFL: In his second season, both with the Chargers…has played all nine of the Chargers’ games in 2012…has recorded 28 tackles this season…played 14 games (four starts) for the Chargers in 2011…recorded 34 tackles and two interceptions in 2011…taken by the Chargers in the second round of the 2011 draft.

At Clemson: Played 53 games (28 starts)…had 211 tackles and five tackles for loss…had one interception and 19 pass breakups…Second-Team All-ACC as a kick returner in 2010 after returning 27 kickoffs for 639 yards…played in the 2010 Senior Bowl.

CHRIS HAIRSTONOT – BillsIn the NFL: In his second season, both with the Buffalo Bills…has played all nine of the Bills’ games this season…has started at left offensive tackle in each of the last five games…part of an offensive line that has helped the Bills average 358.7 yards per game…started seven of his 13 games played in 2011.

At Clemson: First-Team All-ACC offensive tackle in 2010 according to the ACC, Rivals.com, and Phil Steele…invited to play in the 2011 East-West Shrine Game…graduated from Clemson in August of 2010.

JAMIE HARPERRB – TitansIn the NFL: In his second season, both with the Titans…has played seven games this year…has 11 yards on 13 carries and three touchdowns this season…played 13 games as a rookie in 2011…had 44 yards on 17 carries and one touchdown in 2011…taken by the Titans in the fourth round of the 2011 draft.

At Clemson: Played 39 games (10 starts) in three seasons…carried the ball 311 times for 1,311 yards and 12 touchdowns during his career…totaled 50 receptions for 398 yards and three touchdowns in his career.

LEROY HILLLB – SeahawksIn the NFL: In his eighth season, all with Seattle…has started eight of the Seahawks’ nine games this season…has registered 33 tackles and 1.5 sacks…has started 85 of his 93 career regular-season games…has started all seven playoff games in his career…has 497 tackles, 20 sacks, and 11 passes defended in his career.

At Clemson: Two-time, First-Team All-ACC pick…ACC Defensive Player-of-the-Year in 2004…first-team All-American by Rivals.com and third-team All-American by AP as a senior…had 48 tackles for loss and 16 sacks in his career…in the top 20 in Tiger history in sacks and tied for fifth in tackles for loss…in the top 20 in school history with 311 tackles, including 251 in his final two seasons.

JARVIS JENKINSDL – RedskinsIn the NFL: In his second season, both with the Redskins…has started seven of the Redskins’ nine games in 2012…has recorded 11 tackles this season…spent 2011 on the injured-reserve list after suffering a knee injury in the preseason.

BYRON MAXWELLCB – SeahawksIn the NFL: In his second season, both with Seattle…has played just three games this season due to injuries…has seen action only on special teams in 2012 with two tackles…played nine games in 2011…selected by the Seahawks in the sixth round of the 2011 draft.

At Clemson: Played 53 career games (eight starts)…registered 165 tackles, 11.5 tackles for loss, one sack, and four interceptions in 1,499 snaps over four seasons…graduated from Clemson in August of 2010.

ANTOINE McCLAINOG – RavensIn the NFL: In his rookie year…currently on the practice squad with the Ravens.

At Clemson: Second in Clemson history with 54 games (41 starts) in his career…started all 14 games as a senior in 2011 on Clemson’s ACC Championship team…had 183 knockdown blocks…member of the ACC Academic Honor Roll in 2010-11…third-team All-ACC by Phil Steele in 2010…started every game from 2009 through 2011.

MICHAEL PALMERTE – FalconsIn the NFL: In his third year, all with the Falcons…has four catches for 17 yards in 2012…active for six of the Falcons’ nine games this season…started at tight end on September 17 against Denver…has 19 receptions for 118 yards and two touchdowns in his career.

BARRY RICHARDSONOT – RamsIn the NFL: In his fifth season…in his first season with the Rams…has started all nine games at right offensive tackle this season…played the previous four seasons with the Kansas City Chiefs…has started each of his last 41 games, including each of his last 32 games as a member of the Chiefs (2010,11).

At Clemson: Four-year starter (2004-07)…played 49 games (45 starts)…Clemson’s first first-year freshman to be considered a full-time starter on the offensive line since 1943…First-Team All-ACC as a junior and senior…All-American as a senior in 2007…earned his degree in 2007.

RICKY SAPPLB – JetsIn the NFL: In his second season…on the 2012 practice squad with the New York Jets before making the active roster against Seattle on Nov. 11…spent the 2010 season on injured reserve…selected by the Philadelphia Eagles in the fifth round of the 2010 draft.

At Clemson: Three-year starter at defensive end who finished his career with 41 tackles for loss, among the top-15 figures in school history…finished with 16 career sacks…played 50 games and started 36…had 160 career tackles.

COTY SENSABAUGHCB – TitansIn the NFL: In his rookie year…has played all nine games for the Titans…made his first career start on November 4…has 13 tackles, including two tackles on special teams this season…selected in the fourth round of the 2012 draft.

At Clemson: Named a permanent team co-captain for 2011…finished his career with 87 tackles and four interceptions…started all 14 games in 2011…had exactly one interception in each season at Clemson…graduated on May 13, 2011 with a degree in communication studies.

C.J. SPILLERRB – BillsIn the NFL: In his third season, all with the Bills…has 632 yards on 87 carries and four scores in 2012…has 28 receptions for 297 yards and one touchdown this season…leads the NFL in yards per carry with a 7.3-yard average…has seven carries of 20+ yards this season, one of the highest figures in the NFL…his 5.5 yards per carry in his career is first in Bills history.

At Clemson: ACC Player-of-the-Year in 2009, Clemson’s first one since 1987 (Michael Dean Perry)…first offensive player from Clemson to be named ACC Player-of-the-Year since 1978…unanimous first-team All-American as a kick returner, just the third unanimous All-American in Clemson history…sixth in the Heisman Trophy voting, tied for the highest finish in Tiger history and just the second top-10 finish in school history…second in NCAA history in career all-purpose yards (7,588)…graduated in three-and-a-half years in 2009.

CHARLIE WHITEHURSTQB – ChargersIn the NFL: In his seventh season, including his fifth season with the Chargers…active for all eight games this season, but has not played in a game…spent 2010 and 2011 with the Seattle Seahawks…led the Seahawks to the NFC West-clinching 16-6 win on January 2, 2010 with career highs in completions (22), attempts (36), and passing yards (192).

At Clemson: Led Clemson to a win over Colorado in the 2005 Champs Sports Bowl in his final game to give him 25 wins as a starter…four of his 25 career wins as a starter came against South Carolina; he is the only quarterback in series history to post a 4-0 record…had eight fourth-quarter comeback wins in his career.