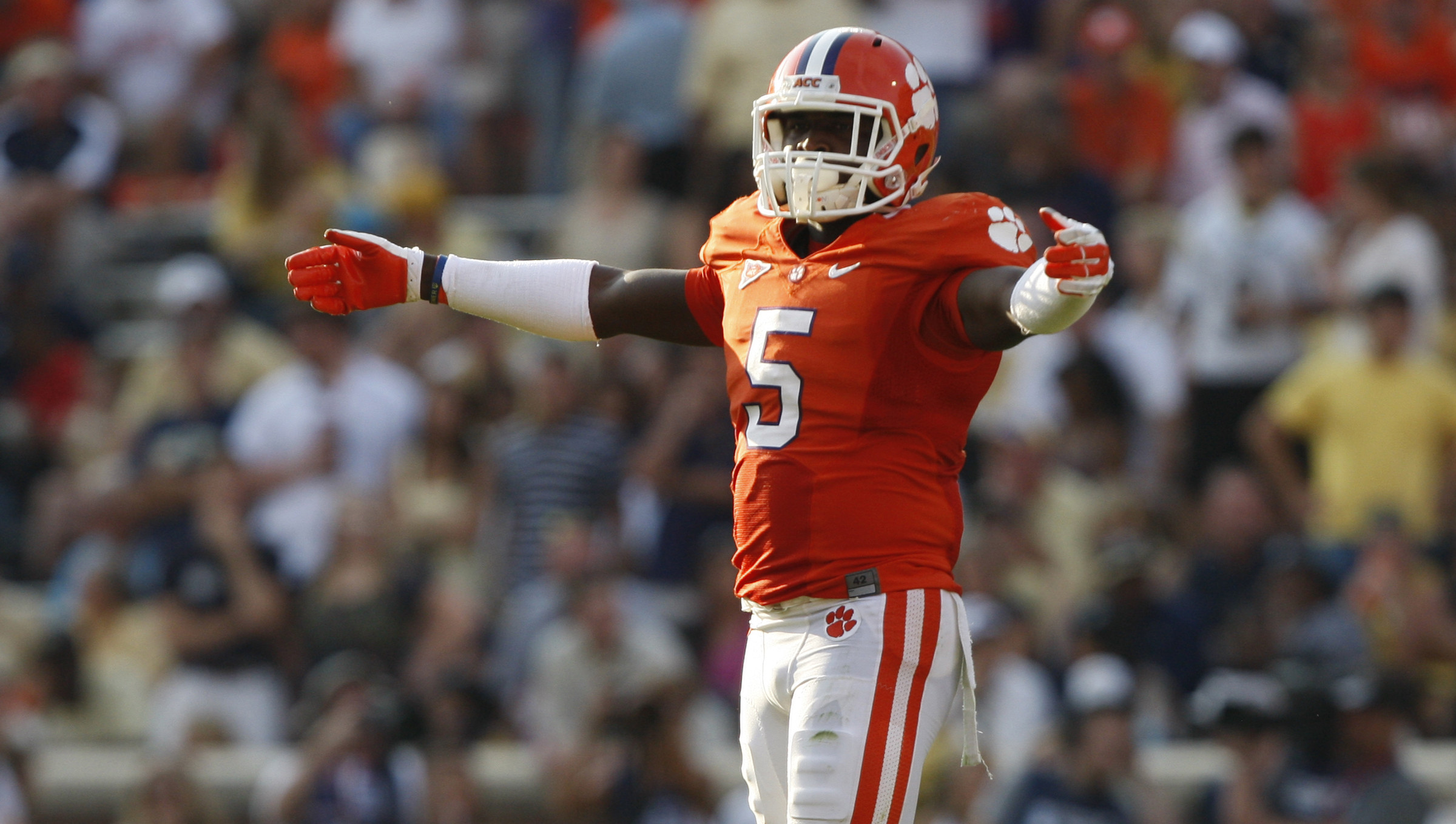 “I formed a good relationship with the guys on my visit,” recalled #5. “They were honest with me. I could tell that they were showing me Clemson and not trying to pull the wool over my eyes with all that flashy stuff and tricking me into committing.”

It did not take long for Meeks to realize that there is something in these hills.

“It just felt right for me here. I didn’t know for sure until I got here, but I knew once I was here, I was making the right decision.”

In 2009 and 2010, Meeks played in a backup role to talented safety DeAndre McDaniel. In 2009, Meeks saw action on 54 defensive snaps and some on special teams. He had a 17-yard interception return in the win against Boston College.

In 2010, Meeks played 13 games with one start. He registered 28 tackles, one interception, and two pass breakups in 256 snaps. His one interception (for 43 yards) came at home against Presbyterian College.

As a junior in 2011, Meeks took over the starting spot at strong safety. He started 10 games and totaled 61 tackles. He led the team in interceptions (3) and also recovered two fumbles.

So far in the 2012 campaign, Meeks has come into his role as a senior. He enjoys being able to mentor the younger players on the Tiger squad.

“I know the right things to say to make them feel better in those situations. I try to use myself as an example. I am playing now, but it has not always been like that. I try to give them encouragement, because I have been there before.”

Meeks and the rest of the Tigers cherish their 2011 ACC Championship and are hungry for another one.

“When we won the ACC in 2011, it made everyone work even harder preparing for 2012. It was very cool to win a championship, because I had never won one. So to win one at the FBS level was pretty awesome. It is a memory I will have forever. We now expect to win championships every year.”

Meeks is definitely leading with his actions on the field. In the home game against Virginia Tech on October 20, he had a breakout performance with two interceptions. He took one of those interceptions 74 yards for a touchdown that gave the Tigers a 17-7 lead late in the first half and momentum.

That interception return moved him from outside the top 10 to fifth place in Clemson history in career interception return yards with 192, six ahead of teammate Rashard Hall, who is sixth with 186 yards. The record is 275 yards by Rex Varn, who played from 1976-79. Meeks’ 74-yard return was the longest by a Tiger defensive back for a touchdown since Varn took one 94 yards for a score at N.C. State in 1978.

“Every player wants to have a breakout game that can get their name out there and also make the program and coaches look good,” explained Meeks. “I am fifth all-time in career interception return yards at Clemson, and by the end of the season, I’d really like to be #1. Getting interceptions certainly helps the team.”

To Meeks, being a part of the Clemson football squad transcends the meetings, practices, and games.

“I believe that our team is one of the tightest in the country,” stated Meeks. “We probably spend more time together outside of football. They are not just my teammates, they are my brothers. We have become best friends and I love them.”

Meeks, who will graduate in December with a degree in sociology and a minor in education, credits his parents, Carlita and Jonathan Browning, with making him the man he is, both on and off the field.

“My parents have been my biggest inspiration,” said Meeks. “When I did not have any scholarship offers, they were always there pushing me to be better. They have always had my back, through thick and thin. They have been to every game since I have been at Clemson and are definitely my biggest fans.”

He also credits Co-Defensive Coordinator and Defensive Backs Coach Charlie Harbison with helping him develop into the player and person he is today.

“He is a great man, and that is a reason why my parents wanted me to come to Clemson,” said Meeks. “He is spiritual, a good coach, father, and husband. He is a good person to model your life after. We have such a good relationship. I know we will stay in contact once I graduate.”

Upon graduation, Meeks plans to attempt a career in the NFL.

“My plan is to try to play professionally and give that a shot. If that does not work out, I want to be a high school teacher. I will graduate with a degree in sociology and a minor in education, so I may go back to school and get a graduate degree in education.