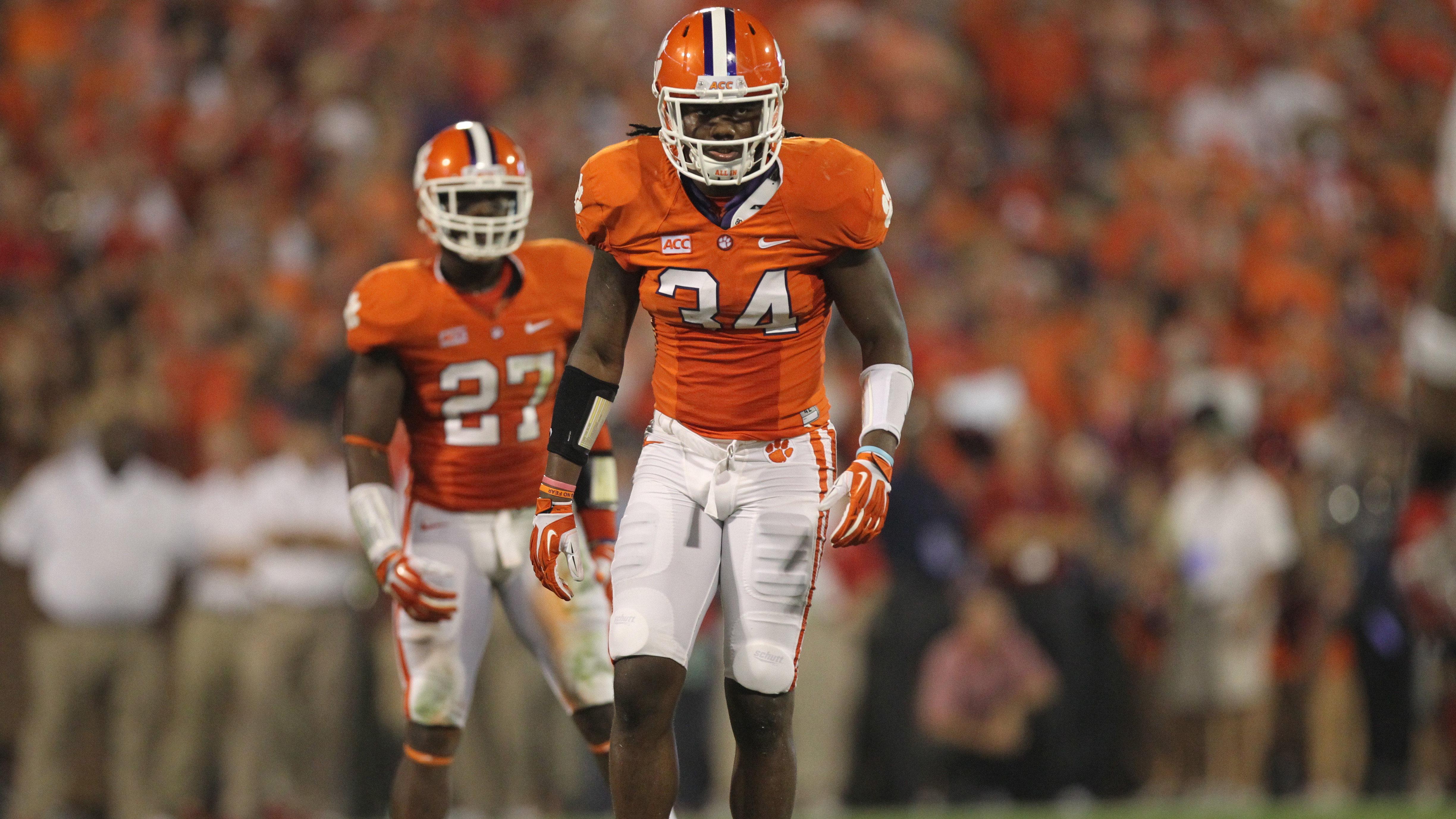 By J.D. Elliott As Dabo Swinney coaches his fifth full season at the helm of the Tiger program, he fields a team comprised solely of players he recruited.  After he was named head coach on December 1, 2008, Swinney had a short three months to assemble his first recruiting class.

He was able to convince 12 players to matriculate at Clemson University, calling his first class the “Dandy Dozen,” a relatively small class by today’s standards.  One of the standouts of that class is Quandon Christian, who has blossomed into one of the stalwarts on the Clemson defense.

The talented athlete starred at one of the best high schools in the state, Lake View High School.  Highly decorated on both sides of the ball, Christian helped lead the Wild Gators to a state championship during his sophomore season and 10 wins in both his junior and senior years.  The versatile Christian played a variety of positions, including running back and his future home in a Clemson uniform…linebacker.

Swinney initially reached out to Christian as an assistant coach, and once he was promoted to head coach, Swinney continued to tirelessly recruit him, as Swinney believed Christian was one of the top athletes in South Carolina.

Acting on blind faith, Christian committed to Swinney and the Tiger football program.

“He told me that Clemson was going to be a good place to go to school,” said #34.  “I held on and cut ties with the people offering me, so I stuck with Coach Swinney.  I believed him.”

The “Dandy Dozen” has lived up to its billing, as many of the players who have formed the backbone of the team have championship aspirations.  The small class made it easier for players to gel, helping to develop an early chemistry.

“Our class was a great class,” stated Christian.  “I was friends and brothers with everyone.  I liked the smaller class, because we had time to bond with each other.  We were going to be with each other for four to five years, so we were able to build relationships.”

In addition to being a star football player, the 6’2″, 230-pound Christian also played basketball.  Although recruited to play linebacker, he had the ball skills to play wide receiver or even running back, a position where he thrived in high school.  Ultimately, Christian thrived at the linebacker position.

After red-shirting the 2009 season, Christian earned his first career start against #16 Miami (FL) in 2010.  Christian started six more games on his way to a very productive rookie season.  After racking up 34 tackles and 1.5 tackles for loss, the coaching staff proclaimed Christian defensive rookie-of-the-year.

“It was a great compliment for me,” said a smiling Christian.  “I was a red-shirt freshman and didn’t really know what was going on, but I went out there to play hard and they named me rookie defensive player-of-the-year.  It was a great honor.”

Christian continued to earn achievements during his sophomore year, recording 36 tackles and 1.5 tackles for loss in seven starts.  One of Christian’s best outings of his career was the second game of the season against Wofford, as he recorded eight tackles against the Terriers’ option offense.

Tiger Nation will not soon forget Christian’s interception of Florida State’s Clint Trickett when the Seminoles rolled into town in 2011.  Christian intercepted the ball in the flat and returned it four yards to the Seminole 20, setting the Tigers up for a prime scoring opportunity in the Tigers’ win over the #11 Seminoles.

“That interception was crazy,” stated Christian.  “I didn’t really know what I did.  I thought he was running the ball, so I came up a little.  Then I dropped into zone coverage, because I knew it was a pass.  The quarterback started scrambling, so I was about to take him and then he threw it.  I reacted and then the stadium went crazy.  I didn’t know I could jump that high.”

Following the 2011 season, Defensive Coordinator Kevin Steele was replaced by Brent Venables, a former defensive coordinator and linebackers coach for the Oklahoma Sooners.  Venables immediately recognized Christian’s talent, developing Christian into more of a hybrid linebacker, a linebacker with a variety of roles.

Venables has challenged the linebackers to be vocal and to be leaders on and off the field to help a talented defense reach its full potential, and it seems to have worked this year.  The defense has helped set the tone the first three games, particularly against S.C. State.  The Tigers returned two interceptions for touchdowns, one caused by a leaping Christian who deflected a pass before falling into the hands of cornerback Darius Robinson.

“We try and come out with an edge every day, because we play against one of the best offenses in the country in practice.  It’s helping out.  The offense is making us better, fundamental work is making us better, and we are determined to have a better defense than we had last year.”

Christian has several goals for the season to help him stay focused.

“I’m trying to be a better leader, be more consistent, make more big plays, and help the team out as much as possible and see where that lands me at the end of the year.  Maybe I’ll have a chance to play professionally.”

With legitimate 4.5 speed, Christian has the size-speed combo that many NFL scouts covet.  The fact that he is so versatile should help his draft stock, but right now, he is focused on ending his career as one of the winningest Tiger lettermen along with the rest of the “Dandy Dozen.”  Swinney had a clear message to each recruit.

“He told me we were going to be good and I believed him,” added Christian.  “Everyone has been working hard the past five years to be one of the top programs in the nation and be consistent every year in terms of wins.

“He told me we were going to be a team that they talk about every year, and it has happened.”