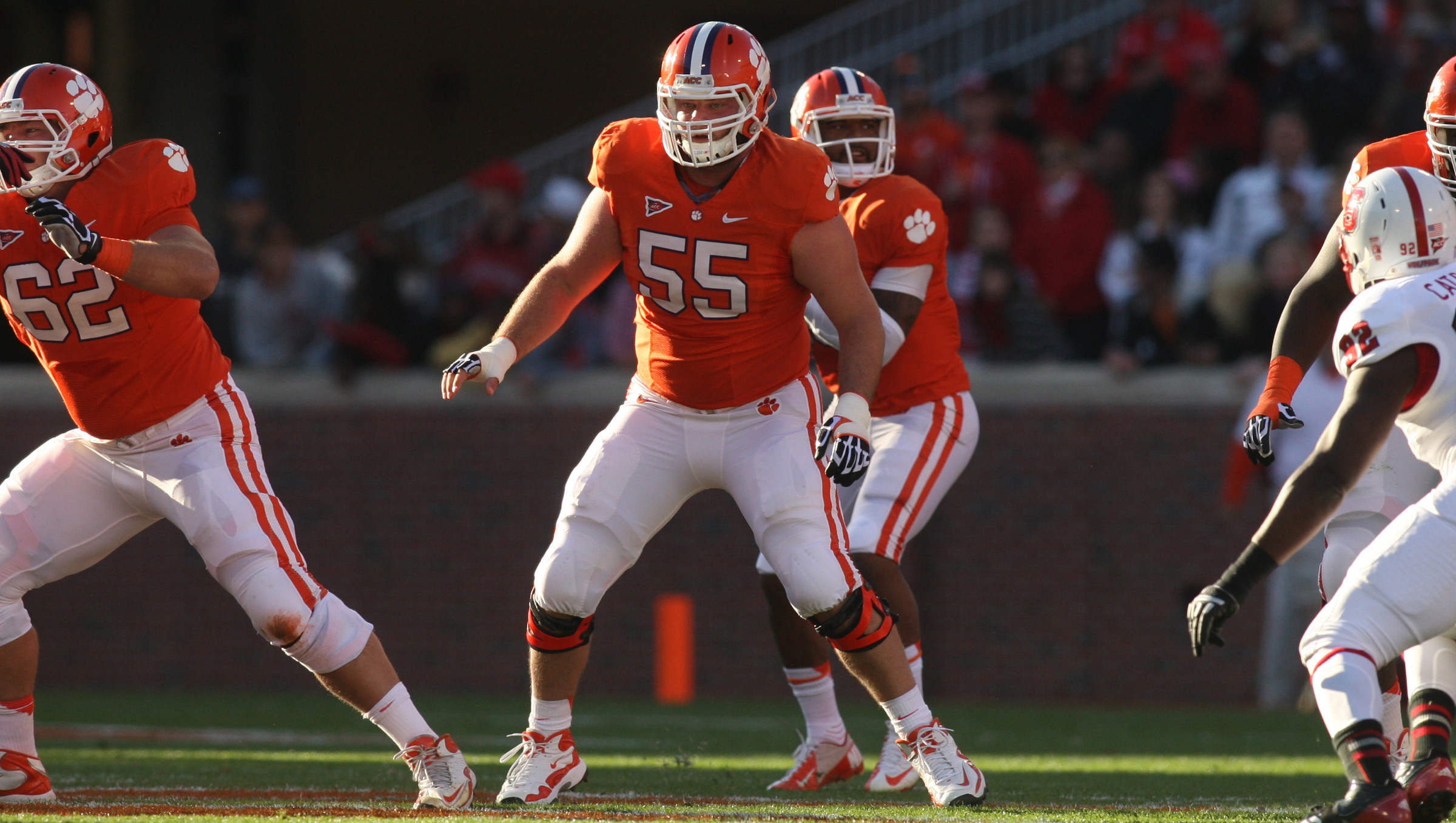 In the heart of the South Carolina Midlands, just down the road from Columbia, rests the tiny town of Pelion, SC with a population of 685. Like so many small towns in South Carolina, football is a passion and a source of pride for this community nestled among pine thickets and surrounding farms. But for folks in Pelion, nothing has made them more proud than witnessing the gridiron success of native son and Clemson graduate Dalton Freeman.

Standing 6’5″ and weighing in at 285 pounds, the center sports an imposing figure on the gridiron. Blessed with natural size, Freeman was also blessed with a natural affinity and skill for the game, aided by his family’s outstanding football legacy.

“I don’t ever remember football not being a part of my life,” said a smiling Freeman. “It all started with my grandfather. He played football for North Carolina, left to join the military, and then finished up playing football at Appalachian State.

“Football has been such a part of our family. I grew up around the game and wanted to be a part of it more than anything. As soon as I could walk, I was out there on the field with my dad at practice, and on every Friday night helping him out as a ballboy. It felt like forever, but once I hit the seventh grade, I was able to suit up for the first time and play some ball.”

From the beginning of his football career in junior high school, it was apparent that Freeman had inherited his family’s athleticism and football savvy. Once arriving on the high school scene and under the tutelage of his father, Freeman blossomed into a prized recruit.With his powerful frame and superb footwork, he was a natural offensive and defensive lineman, dominating the opposition in quick order. As his high school career continued, college coaches around the country took notice.

Garnering additional achievements, Freeman was a finalist for Mr. Football in South Carolina, represented the Palmetto State in the Shrine Bowl, and was named a high school All-American at offensive tackle. Nearly three hours away in the Upstate of South Carolina, Clemson made no secrets how much the Tigers would love to have Freeman wearing the Orange & White.

“When it came time for the recruiting process, I was very blessed to receive about 30 different offers,” recalled Freeman. “I decided to make the most out of the experience and took a ton of visits across the country. But when I got to Clemson, one thing stood out to me about the university…the people.

“The people at Clemson blew me away. The atmosphere was unlike any place I had ever visited. It got to the point where every school had a nice stadium and had cool uniforms, but what it boiled down to for me was the people at Clemson.

“I realized that it was the people here that were going to make me happiest. The quality of men on our staff is what separates Clemson from any other place.”

He arrived on the Clemson campus in the fall of 2008 and began his career as a Tiger. In his first season, he red-shirted and bided his time for a chance to shine for the Clemson faithful. In 2009, Freeman made history and became the first freshman center to start for Clemson over the course of a season since 1943, when the depletion of upperclassmen due to World War II forced Clemson to start freshman reserves.

“My first start is one of my favorite memories,” beamed Freeman. “I got my first start against Wake Forest. It was ironic since my dad played football at Wake Forest and everyone was making a big deal about it. I was a red-shirt freshman and no one was sure how I would do out there.

“I wound up playing pretty well and won the starting job. I’ve been blessed to start every game of my career since that game (47 in a row entering tonight’s contest against South Carolina). That start against the Demon Deacons was a landmark moment in my life.”

The Clemson coaching staff was amazed at the high level of play exhibited by the young center, and they have not given the reins of the offense up to another center these past four years.

Freeman finished 2009 being named a first-team freshman All-American according to CollegeFootballNews.com and was named Clemson’s Offensive Co-Rookie-of-the-Year along with Kyle Parker by the coaching staff.

In 2010, Freeman continued to impress, notching 58 knockdown blocks in 811 snaps (second-most on the team) and allowed just two sacks all season.

Last season, Freeman’s decision making and powerful blocking helped propel Clemson towards winning its first ACC Championship in 20 years. Following the 2011 season, he was named an honorable mention All-American by SI.com, a First-Team All-ACC selection, and was one of six finalists for the Rimington Trophy, which is awarded to the top center in the nation. Not just outstanding on the field, Freeman has been an Academic All-ACC selection the past three seasons as well.

This year, Freeman is continuing his model of consistency for the Tigers, quietly orchestrating one of the most explosive offenses in school history with dreams of leading Clemson to another BCS appearance and one of the best seasons in program history. The Tigers are on a record pace in terms of scoring, touchdowns, total offense, and passing offense.

When asked what he has been most proud of during his time anchoring the offensive line, Freeman did not hesitate.

“The tradition at Clemson is unlike any other, and I’ve been proud to be a part of that.

“When I first got to Clemson, we were on the verge of changing the culture of this program. Since Coach (Dabo) Swinney has taken over and during my four years here, we have done a really good job changing this program from the inside out.

“We’re winning at home, we’re finding ways to win on the road, and we’re becoming a much more consistent program. I think a lot of that has to do with Coach Swinney and his leadership, as well as the type of players he has been able to recruit. The best thing about Clemson is that we’re becoming one of the top football programs in the country, both academically and athletically.”

Upon the conclusion of this year’s bowl game, the Freeman era of Clemson football will come to a close, the final chapter in a career that has made him one of the most lauded centers in Tiger history. With hopes of playing in the NFL, he is determined to accomplish his dream when his career as a Tiger ends.

“Whatever happens in my future, I know God will open the doors and I will choose which one to go in,” he smiled. “I’m thankful to have this opportunity. My family always believed and supported me, even when I didn’t believe in myself.

“It’s hard to believe a little ole’ boy like me could come from Pelion, SC to a place like Clemson and be successful and have an opportunity to make it at the next level. I give God all the honor and glory for that.”

Regardless of Freeman’s future, he has undoubtedly left his mark on Clemson, just as Clemson has left its mark on him. He will leave the school having played more snaps than any other Tiger in history, regardless of position, and will have tied the mark for starts (49).

“I was very blessed to have been given the opportunity to red-shirt as a freshman and then be able to graduate from Clemson in three-and-a-half years with a degree in communication studies,” said #55.

“I’m going to graduate again this December with my second degree in sociology. I’ve tried to make the most of my time here at Clemson. I realize that some day, the air in that football is going to eventually run out. After that happens, that ball will be nothing but a flat, and I’ll have to do more than just play football.

“It all starts with academics, and that’s part of the reason I chose Clemson. This university is one of the premier institutions in the country, and I’m very blessed to have had the opportunity to receive two degrees from this special place. I take pride knowing I will forever be a Tiger.”

And for the Clemson faithful who have spent the past five years watching Dalton Freeman grow as a man and a player, that feeling of pride is mutual.