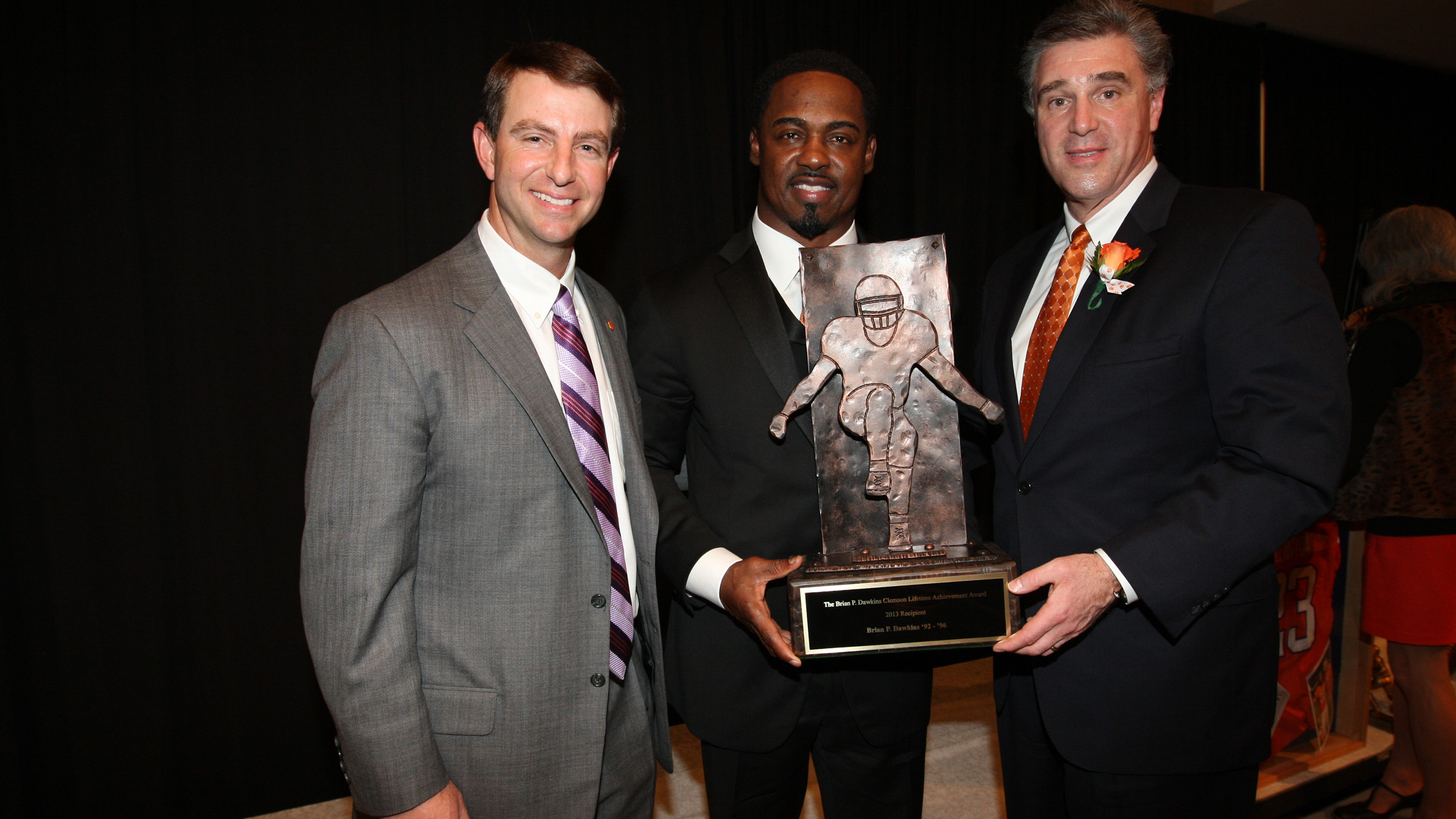 When Head Coach Dabo Swinney decided he wanted to initiate an award to honor a former Tiger football player each year with a lifetime achievement award for performance on the field along with contributions in leadership and community service, it did not take him long to decide who the first recipient should be. In fact, it was such a “no brainer,” that he decided to name the award after him.

“Brian Dawkins has represented this football program and this university with distinction for over 20 years,” said Swinney. “He had a terrific career at Clemson, then had an even better career in the NFL with Philadelphia and Denver.

“But it was not just his accomplishments on the field, it was his character, leadership, and respect that people have for him. For years, I have dealt with NFL scouts, coaches, and general managers, and I can’t tell you how many times they have told me stories about Brian Dawkins.”

Each year, Swinney will first present the Brian Dawkins Lifetime Achievement Award at the Clemson Football Banquet in January. The recipient will then be honored the following fall at a football game in Memorial Stadium. Dawkins was on hand to first receive the award at the banquet honoring the 2012 team in January. Swinney plans to have Dawkins come to the banquet each year to present the award.

“Brian Dawkins epitomizes this award,” continued Swinney. “What an impact he has had on the world of football. You could see the passion and the leadership every time he took the field.

“But off the field, his impact on the Philadelphia and Denver communities was so strong. He was the 2008 Whizzer White NFL Man-of-the-Year, an award that dates to 1966 when Bart Starr was the recipient.

“He has set the standard for this award. I am proud to have him as a representative of our program, and he continues to embrace this program. We are so fortunate to have him.”

The best story written about Dawkins from a character standpoint was authored by Mark Meany, a producer at WPVI-TV in Philadelphia. It was published in 2012 when his #20 was retired by the Eagles.

He took us back to January 11, 2009, a day of celebration in Philadelphia, because the Eagles had just beaten the rival New York Giants on the road to advance to the NFC Championship game.

It was Meany’s job to produce a postgame special for his station, and Dawkins was to be his most important interview. The interview was to be done by Gary Papa, a television legend in Philadelphia who was dying of prostate cancer. It would be the last game Papa covered.

Here is what Meany wrote:

Dawkins emerged from the lockerroom barely able to walk, his face clearly reflecting the pain he was in. He asked me where we were going to do the interview. I explained that Gary was waiting for him, but it was a long walk to the other side of the stadium. That was as far as Gary could make it before he needed to sit and rest.

A quick discussion ensued between myself, Dawkins, and Eagles Media Relations Manager Ryan Nissan. It was quickly determined that Dawkins was too hurt to make the walk. We would have to cancel the interview. That is, until I said one simple thing to Dawkins…”Gary’s in bad shape, he’s having a really rough day.”

Dawkins looked me in the eye and said, “let’s go.”

The walk down the hallway through the bowels of Giants Stadium took forever. Dawkins was limping and silent the entire way. We finally got to Gary, who was sitting down and still gathering his strength.

Dawkins walked up to Gary and helped him out of the chair.

Then the two embraced.

Both men, two of the toughest I’ve ever met, began to sob in each other’s arms. It went on for what seemed like forever. I then noticed that through the entire embrace, Dawkins was whispering in Gary’s ear.

I’m not sure that whispering can be described as intense, but that’s what this was. Dawkins was giving Gary a pep talk, a pregame speech before a tough game. It was vintage Dawkins.”

Dawkins played for the Tigers from 1992-95. He is another of those great recruiting stories. Clemson had been recruiting Patrick Sapp, one of the most-highly recruited quarterbacks in the nation out of William M. Raines High School in Jacksonville, FL. One of his high school teammates was Dawkins. Then-Clemson Assistant Coach Rick Stockstill became impressed with Dawkins while watching Sapp and told Head Coach Ken Hatfield that they should take a look at him.

Dawkins and Sapp signed with Clemson on the same day in 1992. Sapp started at quarterback as a first-year freshman, while Dawkins played on special teams in 1992 (wearing #37, as Dawkins would go on to wear #20 for the rest of his college and professional career). But in 1993, Dawkins moved into the starting lineup and earned All-ACC honors each of his last three years.

During his senior season in 1995, Dawkins had a breakout year, helping the Tigers to an 8-3 regular-season record and a top-20 ranking. He led the ACC in interceptions (6), finishing eighth in the nation. He was a second-team All-American by AP and Sporting News. He was also named Sports Illustrated National Defensive Player-of-the-Week against Duke when he had three interceptions in one quarter, the only Tiger in history to do that.

Dawkins was the #61 overall pick in the 1996 NFL draft and went on to have one of the great careers in NFL history. A former Tiger has never been inducted into the Pro Football Hall of Fame, but that should end in the near future, as many believe Dawkins will be inducted soon after the five-year waiting period. He will be eligible for induction starting in 2017.

Dawkins was named to the NFL All-Rookie team in 1996, and the awards did not stop. He was a nine-time Pro Bowl selection, more than any other former Tiger. More impressive, his nine Pro Bowl selections are second-most in NFL history for a safety.

So today, we welcome back to Clemson one of the greats in Tiger history who has been one of the outstanding representatives of this institution among all Clemson graduates over the last 20 years. Swinney certainly believes that, and I would think just about every Clemson graduate and fan would agree.