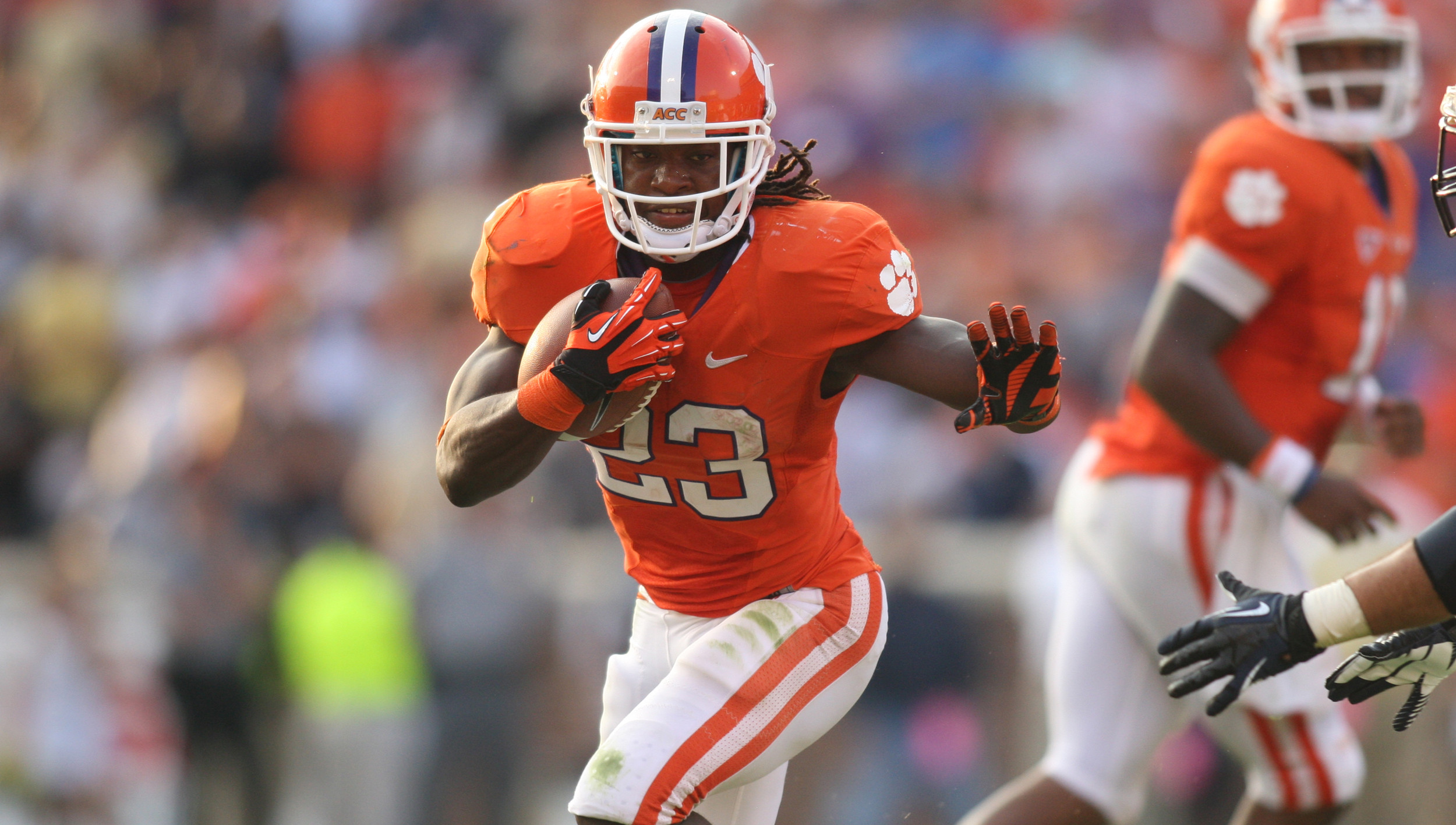 On February 1, 2012, the Clemson football program signed a nationally-acclaimed recruiting class to help move the Tigers into a bright future. But the feeling within the football program was that the most important recruiting haul of the offseason came on January 10, when running back Andre Ellington announced that he would return to school for his senior season.

Ellington was considered an intriguing prospect at the conclusion of last season, but he came back to Tigertown to complete a series of goals he keeps to himself. Whatever they are, they drive him each day he competes as his Clemson career comes to a close.

The Tigers’ leading rusher in 2012 entered school in 2008 as a lean freshman from Moncks Corner, SC. Ellington was a highly-touted recruit, but he found himself slotted behind fellow rookie Jamie Harper on a depth chart that also included future NFL players James Davis and C.J. Spiller.

Instead of whining and griping about his predicament, Ellington did what many players in today’s game fail to understand. He took a red-shirt season, developed in the weightroom, and honed his craft. For a player who chose the Tigers over Florida, Georgia, Kentucky, Maryland, North Carolina, South Carolina, and Tennessee, this was no small feat.

Ellington understood his role as part of a backup duo with Harper, and he began the 2009 season with that in mind. For the year, he averaged 7.2 yards per carry as a replacement for Spiller, particularly when Spiller spent time out of games due to injury. The current Buffalo Bill made a significant impact on Ellington’s Clemson career, and the two still speak on occasion.

“He was a guy who I actually studied a lot,” said Ellington of Spiller. “In the end, he told me that he learned a lot from me. I was kind of shocked by that. Our running styles are basically the same. He does a lot of things that I do in between the tackles.”

In his first career start against Florida State in 2009, Ellington rushed for 54 yards on just six carries and scored one of his four touchdowns on the season. He also totaled 11 receptions out of the backfield that season.

As a sophomore in 2010, Ellington started six games and gained 686 rushing yards despite playing a total of three snaps in the final five contests of the season. Four times during the 2009 campaign, he rushed for more than 100 yards. In the opener against North Texas, Ellington gained 122 yards on only 12 carries.

In a road game against eventual National Champion Auburn, Ellington was a workhorse, as he ran the football 22 times for 140 yards and a score against the SEC Tigers. He also gained a season-high 166 yards on 20 carries against Georgia Tech and scored on an 87-yard kickoff return against Maryland, the only special teams score of his career.

Prior to the 2011 season, Chad Morris joined the Clemson football staff as the offensive coordinator, and Ellington said he immediately saw his game improve. He also credited Morris, one of the most esteemed assistant coaches in the country, with helping attract Tony Elliott, his current position coach, back to Clemson.

“He’s a guy who’s going to create the best opportunity for players to be successful,” said Ellington of the Tigers’ offensive coordinator. “Having Coach Morris led us to getting Coach Elliott. He’s a guy who teaches you the game, not just how to do it, but what you’re learning while you’re doing it.”

Heading into the 2011 season, Ellington’s issues with injuries were cited by fans and pundits as one of Clemson’s major question marks. Much of the offseason was spent preparing his body for more of a grind.

As the top back on the depth chart, Ellington flourished during his junior season. He almost doubled his carries from the previous year and rushed for 1,178 yards while averaging 5.3 yards per carry.

During the season, Ellington still dealt with nagging injuries, but he played through them, missing only one contest. He surpassed the 100-yard mark five times, including a breakout 212-yard performance in a ferocious come-from-behind win at Maryland.

The 5’10” running back played his best in key situations. In the final two games of the season, in the ACC Championship game against #3 Virginia Tech and the Orange Bowl against #22 West Virginia, he combined for 241 yards on 30 carries and two touchdowns.

Then, it was decision time. There were plenty of factors beckoning Ellington to take a chance and enter the NFL draft, but just like his role model (Spiller) had done two seasons prior, he made a decision to stay and finish the race he had started in 2008.

“I got a chance to talk with Coach (Dabo) Swinney,” recalled Ellington. “We developed a great understanding on things I can improve on for the next level. Getting that degree was the main thing I wanted to focus on. If I had left this year and not come back, I wouldn’t have been able to get that.”

It was worth Ellington’s while to return to Tigertown. He has proven to scouts that he can remain generally healthy for an entire season while carrying the load in Morris’ offense.

Ellington is well on his way to another 1,000-yard season and has showcased his improved receiving ability and pass-blocking ability to any scouts who might have questioned those aspects of his game a year ago.

Earlier this season, Ellington set a new career rushing-yardage high in a nationally-televised contest against SEC foe Auburn, as he gained 228 yards, the most in Clemson history against an SEC opponent. Two of his top-four rushing games in an illustrious career have come against Auburn, as he has combined for 414 rushing yards and two scores in three meetings.

One of the driving forces behind his decision to return was a desire to finish his career and be proud of what he had accomplished, both individually and with his teammates. The Berkeley High School product has seen a ton of changes during his five-year stint at Clemson, and he wanted to make absolutely sure the program was at its peak when he stepped aside.

“In past years, a lot of things didn’t go quite the way we wanted them to,” said #23. “This year, we’re on the right foot and we’re doing great things. Like we always say, we’re knocking down a lot of walls.”

Now, Ellington prepares to run down the Hill for the final time. It means more to him than most because his cousin, Bruce, a two-sport athlete at South Carolina who also wears #23 on the gridiron, will be standing across the field on the opposing sideline tonight. For Andre, it is fitting to close things out in Death Valley competing against his cousin.

“When we were kids, it would just be the two of us in the yard playing football…me against him,” said Andre. “When we would have other cousins out there, he was on the opposite team and I would go against him. When we’re in the gym playing basketball, I’m playing against him.”

When the dust settles on the 2012 season, with a host of accolades under his belt, Ellington will get to work preparing for the NFL draft. Chances are, he will be glad he waited an extra year.