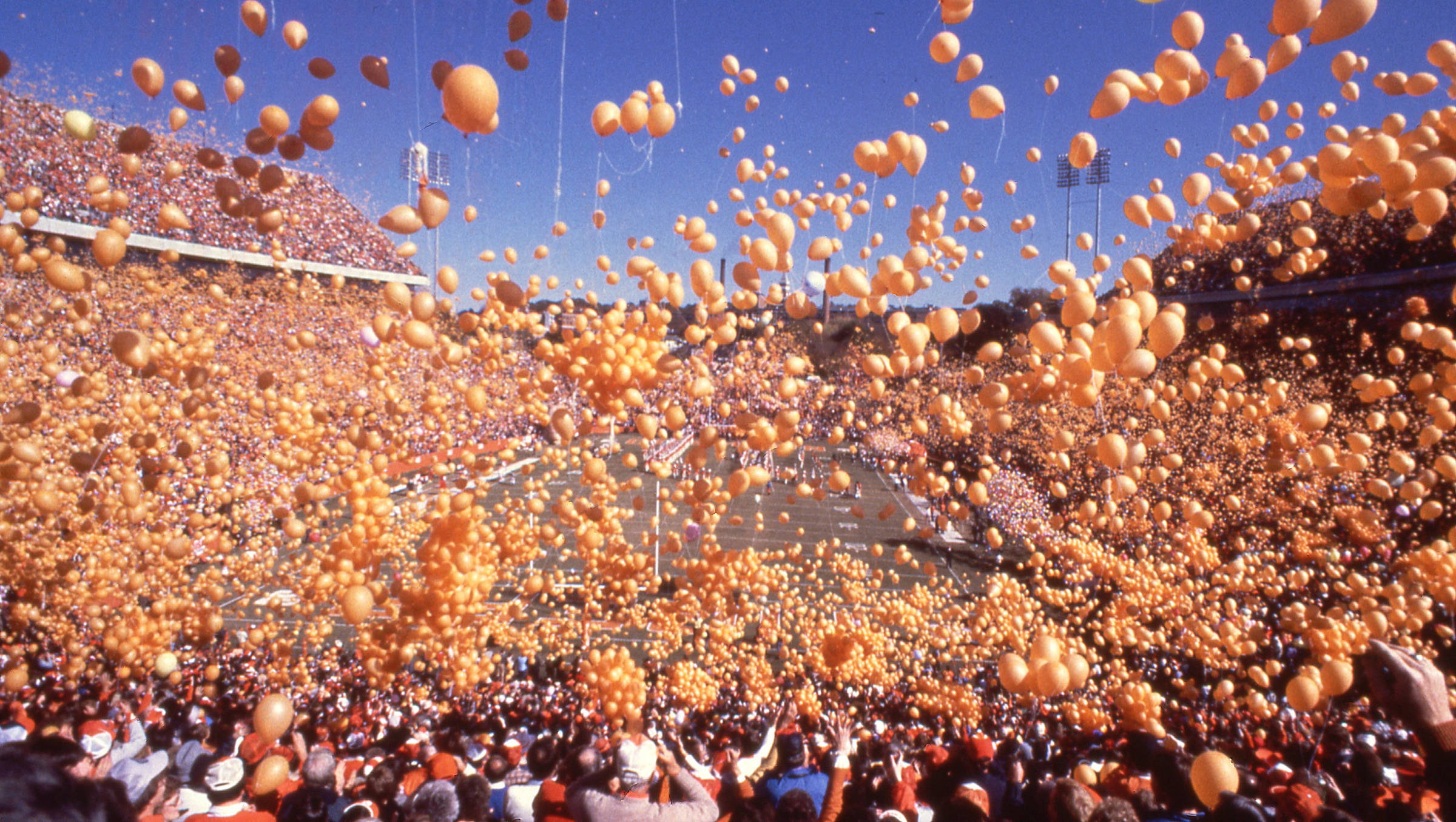 ORANGE PANTS1980 South Carolina GameOne of Head Coach Danny Ford’s best capers took place in 1980 for the Clemson vs. South Carolina game. Ford had ordered some orange pants in the summer to save them for a special occasion.

Coming off a 34-7 loss at Maryland in the 10th game of the season, he believed this Senior Day game against South Carolina was that special day. Ford had his players warm up in the traditional white pants.

After they came into the locker room for the last time, he had them change into solid orange pants (not the easiest “quick change” to accomplish just before kickoff, especially for linemen).

Tiger fans responded with excitement, and so did senior defensive back Willie Underwood, who had the game of his life with 17 tackles and two interceptions for 101 return yards.

They were the first two interceptions of his career and the interception return yardage is still a Clemson single-game record.

The emotion of that day carried over to the next season and Clemson went on to win the 1981 National Championship.

OLSZEWSKI’S TOUCHDOWN1966 South Carolina GameOn the day Clemson clinched the 1966 ACC title, the Tigers rushed for 255 yards. Buddy Gore had 130 of those on 25 carries.

However, he did not provide the most interesting rushing play of the day. That belonged to All-America offensive guard Harry Olszewski, who picked up a mid-air fumble and raced 12 yards for a score. It was a fluke play, not a “fumble-rooskie.” Olszewski was pulling on the play and somehow the ball popped into the air, hitting him in stride.

ORANGE SHOES1967 N.C. State GameOne of Head Coach Frank Howard’s greatest motivational ploys took place when the Tigers faced #10 N.C. State on November 18, 1967. The Wolfpack came to Clemson with an 8-1 record and a #10 ranking in the AP poll.

N.C. State had gained a lot of attention due to the performance of its defense, which had worn white shoes all year. So Howard decided he would go one better. He told his managers to go to every store in the area and buy up all the orange paint they could find and apply them to the shoes of his entire team. Eight stores later, all the orange paint in the Upstate was at Memorial Stadium.

The game turned out to be a battle of defenses, but the Tigers came away with a 14-6 victory. A 28-yard touchdown pass from Jimmy Addison to Buddy Gore was a big play in the game. It proved to be Gore’s only career receiving touchdown.

While N.C. State had been the higher-ranked team all year, Clemson’s victory gave the Tigers a third-straight ACC title. It was the highest-ranked team Howard defeated in Death Valley.

BALLOON LAUNCH1983 Maryland GameDuring the 1983 season, Student Body President Mark Wilson came to Athletic Director Bill McLellan with the idea of breaking the existing Guinness Book of World Records mark for a balloon launch. Wilson thought it would be quite a spectacle as the Tigers ran down the Hill prior to the Maryland contest, Clemson’s final home game of the season.

Showing his great organizational skills, and with the fundraising help of IPTAY members, Wilson bought 250 miles of string, 400 tanks of helium, 195 balloon fillers, and somehow got 3,000 Clemson students (without the use of social media) to come to the stadium at 7:00 AM for the 1:00 PM game.

Balloons were filled by 11:30 AM, and at 12:57 PM as the cannon sounded, the Tigers descended the Hill while 363,729 balloons ascended to the heavens.

From the press box, it was almost black, something out of an Alfred Hitchcock movie. You can go on YouTube.com and see the video of it. IPTAY collected $28,000 from private donations and the excess money raised was donated to Cooper Library on campus.And yes, Clemson won the game by a score of 52-27.

SOCCER FIELD WARMUP1976 South Carolina GameHead Coach Red Parker’s last game at Clemson was memorable, as he schemed to defeat South Carolina 28-9. It was a dominant performance against a South Carolina squad that had embarrassed the Tigers the previous year by a score of 56-20.

Parker pulled out all the motivational tricks he had, even from the pregame warmup. The site was the old soccer field near the stadium (now a parking area on an intramural field beyond the North side of the stadium).

It was a strange pregame setting as South Carolina went through its exercises as the only team in the stadium. Clemson’s first appearance came as it arrived at the top of the Hill.Warren Ratchford gained 127 yards and Tracy Perry added 98 yards and two touchdowns in a convincing 28-9 win that kick-started Clemson’s landmark 1977 season.

FUSCO’S FIELD GOAL1976 Duke GameThe 1976 season was a trying one for Clemson and Head Coach Red Parker. The most difficult result to accept was an 18-18 tie against Duke.

On the last play of the game, Vince Fusco, who had kicked five field goals for all 15 of Duke’s points to that juncture, came on for a 57-yard field-goal attempt to tie the score.

His kick hit the crossbar and bounced over for his then-ACC-record boot, a mark that was broken by Clemson’s current long-distance placekicker Spencer Benton (61-yarder) against Ball State on September 8, 2012. Mike McGee, who would later become athletic director at South Carolina, was Duke’s head coach that day.

HAIL STORM1963 Georgia GameThe most unusual moment in Memorial Stadium history from a weather standpoint took place when Clemson faced Georgia in 1963. When the game started on this October 12 day, the temperature reached 84 degrees.

But by halftime, the temperature dropped to 57 degrees and the most torrential hailstorm in the history of the Upstate took place. The halftime show had to be cancelled and the 24,000 fans in attendance ran for cover.

Clemson Head Coach Frank Howard and Georgia Head Coach Johnny Griffith met under the stands and delayed the start of the second half for 30 minutes. The field looked like a sheet of ice. Clemson’s grounds crew cleared the field as much as possible.

The Tigers dealt with the conditions the best during the second half and tied the score 7-7 in the third quarter, which ended up being the final score.

CONSECUTIVE FIELD GOALS1983 Georgia GameTwenty years later, there was a second tie between Clemson and Georgia that included a bizarre ending. Have you ever seen a game end with consecutive field-goal attempts?

Clemson and Georgia, who combined for a 19-2-1 record in 1983, were tied 16-16 in the final minute of play on this September 17 contest that was not televised and took just two hours and 40 minutes to play. Clemson was faced with a second-and-10 from the Tiger 48 with eight seconds left in the game.

Head Coach Danny Ford sent Donald Igwebuike onto the field to attempt a 68-yard field goal to win the game. He had made a 65-yarder in practice, so Ford thought it was worth a try.

The kick was short, but one second remained on the clock. That meant Georgia took over at the Clemson 48. Therefore, Head Coach Vince Dooley sent Kevin Butler onto the field to attempt a 66-yarder. Butler’s kick at the game-winner was also short and the contest ended in a 16-16 tie.

PERRY’S BLOCKED PUNT1984 Wake Forest GameI could do a top-10 list of greatest William Perry plays, but you really need to see the video to believe them. His most incredible play in my mind took place against Wake Forest on November 3, 1984.

Clemson was leading 13-0 in the second quarter when the Demon Deacons faced a fourth-and-one at the Clemson 43. Head Coach Danny Ford thought Wake Forest might go for it on fourth down, so he left his defense on the field.

That meant Perry was on the field as the middle guard, going head-up over the snapper. Perry bullrushed with such force that he sent the blocking back airborne as punter Harry Newsome punted the ball off the rear end of his blocking back. The ball caromed backwards all the way to the Tiger 21, 36 yards downfield from the line of scrimmage, where Jeff Wells recovered for the Tigers.

After a meeting in the press box, we decided to give Perry a blocked punt, even though no part of his body touched the ball. However, his pure strength caused the blocked punt and he was thus credited with a 36-yard punt return.

Then, they did both in the same game. It was the most bizarre statistical occurrence in my 35 years at Clemson.

I had been keeping track of how many returns Clemson had without a punt or kickoff return for a score for a few years. Entering the Georgia Tech game, no Tiger had returned a punt or kickoff for a score in 998 returns. After a 10-yard punt return by Donnell Woolford in the first quarter, Woolford took a punt after the second Georgia Tech possession at the Clemson 22 and raced 78 yards for a touchdown. That is right, on the 1,000th return.

Then in the second half, Joe Henderson sprinted 95 yards for a score on a kickoff return, the first by a Tiger since Hal Davis had a kickoff return for a touchdown against Georgia in 1962.

It was statistical nirvana.