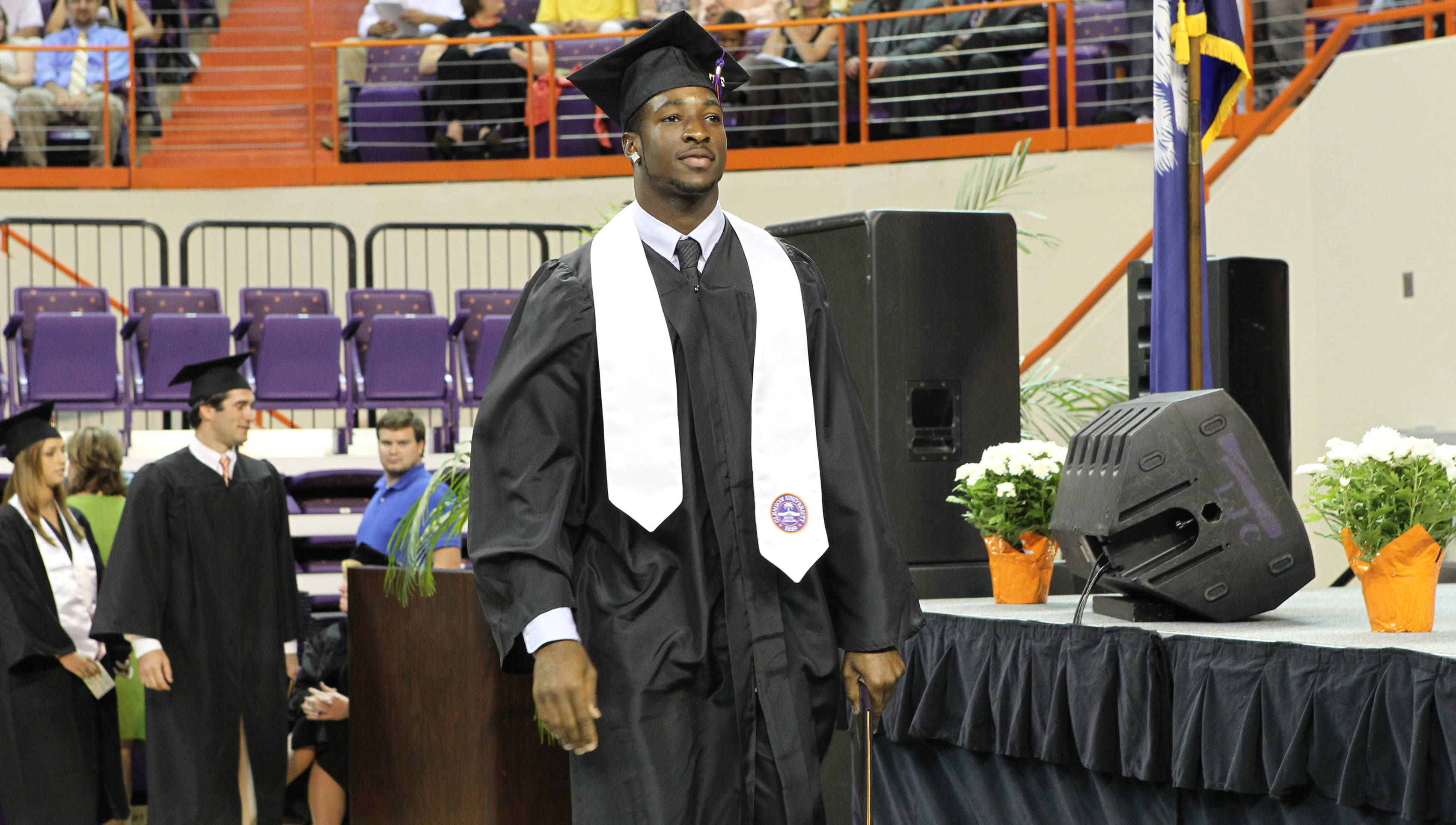 More often than not, fans only see, or worry about, how student-athletes perform on the field. However, the student aspect of being a student-athlete is just as important as the athletic side. Few Clemson student-athletes have made as much of an impact off the field as graduate safety Rashard Hall.

Hall entered Clemson in 2008 after choosing the Tigers over Maryland, South Carolina, and West Virginia, to name a few, because of the family atmosphere.

“Clemson provided me with opportunities not only for football, but academically as well,” said Hall. “When I came here, it was like a family. Everyone was genuinely nice here and it felt like home.”

After red-shirting in the 2008 season, Hall made a name for himself with a big 2009 campaign. He totaled six interceptions and had an interception in four straight games to tie a school record. He also tallied 63 tackles and played 501 snaps on defense.

“God blessed me with opportunities. I came in at the right time and was able to make the most of my God-given ability.”

In 2010, Hall hauled in two interceptions, including a 52-yard interception return for a touchdown at Boston College, and recorded 65 tackles in 621 snaps. He received the team Hustle Award for the defense as well.

In 2011, #31 recorded a team-high 89 tackles, three tackles for loss, one sack, two interceptions, and two recovered fumbles. In the ACC Championship Game victory over #3 Virginia Tech, Hall had eight tackles to lead the defense.

“Winning the ACC Championship definitely has to be up there, if not #1,” said Hall. “After working so hard with a bunch of guys who you love and then achieve a common goal, it is pretty special.

“It meant a lot to be a part and contribute to it. To accomplish that goal with a bunch of guys who have been here five years like I have and to share that with them is pretty special.”

“It is a record that defensive backs always talk about, from Michael Hamlin to DeAndre McDaniel to even when Chris Clemons was here,” he stated. “I came in when all those guys were seniors and obviously played with DeAndre for two years and we talked about it a lot. It was always something that I wanted to achieve here.”

Clemons and Hamlin went on to play in the NFL and, along with McDaniel, they were able to help Hall with the mental aspect of his game during their time as teammates.

“Playing alongside them helped me greatly, especially DeAndre,” said Hall. “I have never seen a guy with so much passion for the game, but he was also smart. He was game-smart and football-smart, and he helped me a lot with the mental aspect of the game.”

Despite all his on-field success, Hall has been equally impressive off the field. The Saint Augustine, FL native graduated on August 13, 2011 in just over three years with a degree in marketing. This allowed him to accomplish his goal of being able to attend graduate school.

In addition, Hall was an Academic All-ACC pick in 2009 and 2010 and has been named to the ACC Academic Honor Roll three times. He also won the Athletic Director’s Award, which is given to a Clemson student-athlete for being on the honor roll every semester. His off-the-field successes have not just come in the classroom.

Last fall, Hall, along with classmate Dominique Jordan, started the Brian Askew Memorial Scholarship. Askew, who was a classmate of both Hall and Jordan, was tragically found dead in September of 2011. Hall and Jordan were touched by this tragedy and wanted to do something to honor Askew.

“I interacted with him and had two classes with him, and Dominique knew him as well,” recalled Hall. “He lost his scholarship and no one really knew if that had been a part of his death or not. We both felt touched and wanted to give back and start a scholarship, so that stuff like that wouldn’t happen to other people.”

Hall has also participated in numerous internships during his time at Clemson, including one with Coca-Cola and another with the National College Players Association (NCPA) in an effort to help give student-athletes more rights within the boundaries of NCAA regulations. Hall has also given countless hours of community service during his collegiate career.

With all those activities in addition to football, Hall has had to manage his time between the two.

“Anything that you want to make time for, you will,” said the fifth-year Tiger. “Once you find your motivation, then stay dedicated to it. It’s definitely not easy, but every sacrifice has its benefit.”

For his success on and off the field, Hall is one of 30 semifinalists for the Lowe’s Senior Class Award. The award honors seniors who remain committed to their university and elect to pursue the many rewards that a senior season can bring.

The award judges the student-athletes in four different categories…community, classroom, character, and competition. Hall has shown examples of each throughout his career and is honored to be a semifinalist for the award.

“It’s funny…I didn’t really even know about it until Caleb Sturgis (Florida’s placekicker who played with Hall in high school) texted me and told me one day,” said Hall. “It’s a great award and I am honored to be on the list.”

With all that Hall has already accomplished, he will look to pursue a career in football at the next level and see where it takes him after his Clemson career has ended.

Many people will remember Hall for certain moments or plays that he made on the gridiron. However, few student-athletes will be able to leave Clemson having truly embodied the words student-athlete more than Rashard Hall.