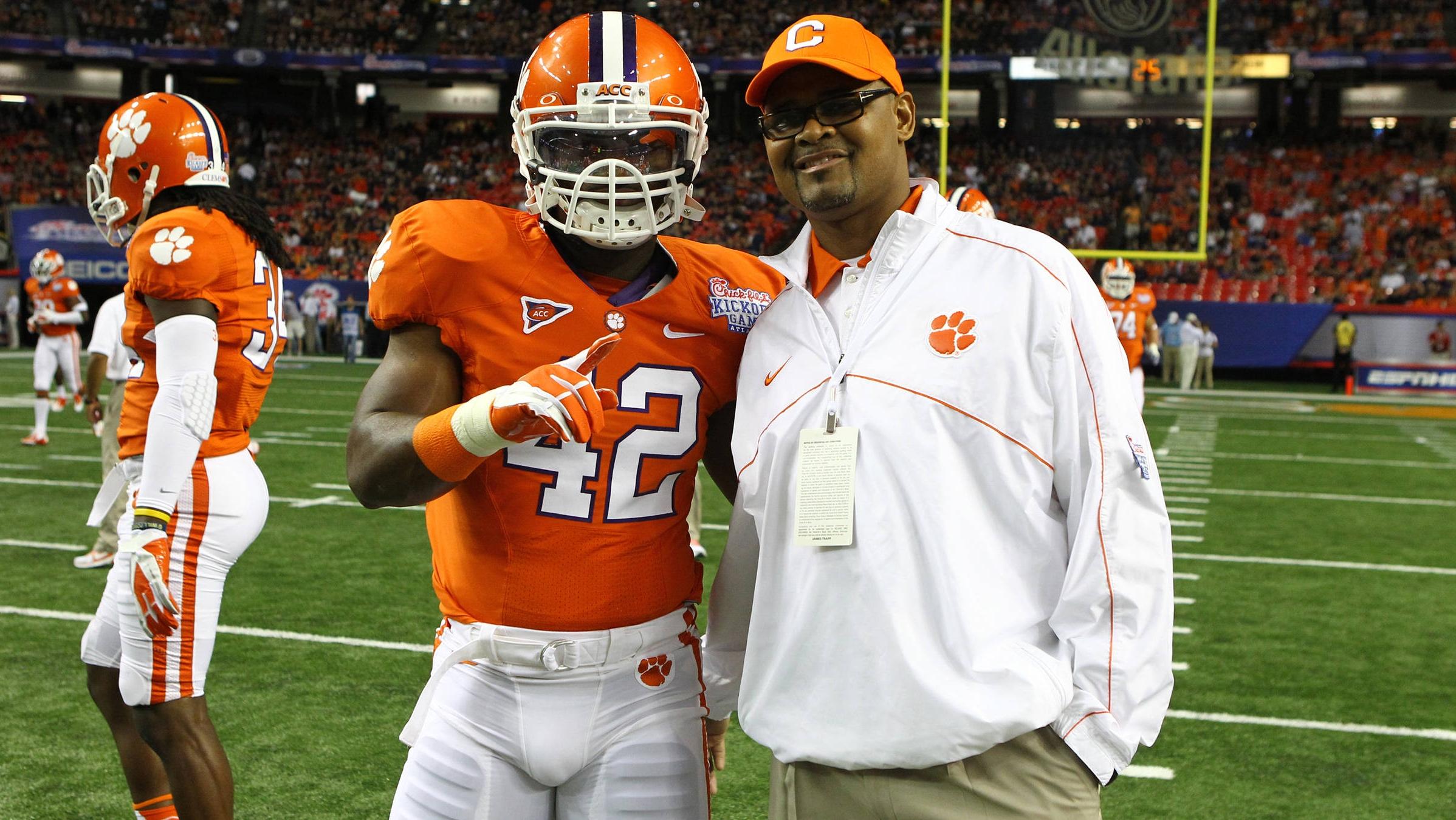 By William QualkinbushRight in the middle of the Clemson football media guide’s player bio section, there is an odd occurrence.  In the “H” section, between the bios of Rashard Hall and DeAndre Hopkins, sits Corico Wright‘s name.  His inclusion there involves not a publishing error, but rather a personal choice.  Prior to the season, Wright legally changed his name from Hawkins.  (There was enough time to change the heading of his bio, but not enough time to redo the entire layout of the section to put him in the proper alphabetical order.)

The name change stems from a series of conversations the senior linebacker had with former Tiger defensive back James Trapp, who now serves as the volunteer team advisor.  Trapp, as he does with many student-athletes, led Wright through several “battleground sessions,” which are designed to aid student-athletes in spiritual development.  It was within the confines of these discussions that Wright discovered something was missing from his life.

“Through that, I realized that you have to honor your mother and your father,” said Wright.  “My father and I didn’t have a great relationship.  I really reached out to him and started working on that relationship.”

Wright reached out to his father, and over the past several months, the two have developed a healthy relationship.  Because of the things happening in his life, the Milledgeville, GA native decided to change his last name from Hawkins, which he had worn on his jersey for three seasons, to truly bring honor to his father’s name.

This season, Wright is also committed to carrying on Clemson’s storied tradition of producing standout linebackers.  He started 25 games in his first three seasons.  In his first career start against Kentucky in the 2009 Music City Bowl, he had seven tackles, including six first hits, to rank among Clemson’s top tacklers in that victory.

He started all 13 games as a sophomore when he totaled 70 tackles, including 10 tackles for loss, on a Clemson defense that finished in the top 10 in the nation in scoring defense.  He had seven tackles in the win over a top-25 N.C. State team that held Russell Wilson and the Wolfpack to just 13 points.

Wright’s 14 tackles against Georgia Tech in Atlanta was his best single-game output in the category during the season.  He also had seven tackles, all first hits, in 38 snaps in the ACC Championship game win over #3 Virginia Tech.

Wright’s leadership was invaluable on a linebacker corps that was filled with eager young players last year.

This season, Wright will be counted on to lead again for two major reasons.  First, he is a senior who has proven to be a rock-solid competitor over the better part of three seasons.  Second, the whole scheme is different in 2012 thanks to the arrival of first-year Defensive Coordinator Brent Venables.

Venables has long been among the most adept defensive coaches in the nation at talent development, particularly at the linebacker position.  During a decade-long stint at Oklahoma prior to his arrival at Clemson, Venables helped a multitude of linebackers leave the Sooners and move directly into the professional ranks.  In a short time under his tutelage, Wright has seen what makes his new position coach so successful.

“Coach Venables is a teacher,” stated Wright.  “He’s been pushing us, day in and day out, to work on our technique, alignment, assignment, eyes, and tackling.  It’s Linebacker 101.  It’s about being the best linebacker you can be every day.”

Even though becoming acclimated to a new scheme is difficult, especially after being indoctrinated in a different system for three years, Wright has taken the transition in stride.  He believes it is important for the players who have learned positive habits over the years to be good examples to the program’s newcomers who are still trying to acclimate.

“When you become a senior, you already know how to study,” he said.  “You know how to come in and put in the extra time in the film room.  You can meet with coaches and go over film, go over what you’re supposed to do, ask questions.”

Head Coach Dabo Swinney has noticed a change in Wright’s demeanor this offseason.  He attributes it to the time his senior has spent with Trapp, but he also understands the internal drive Wright possesses to improve.

“Corico is a great young man and a natural leader,” said Swinney.  “But I have seen a spiritual peace about him as he’s refocused in that area.

“We have a lot of young guys on this team.  He’s taken it upon himself to be one of those positive voices among these players.  He’s done a really, really good job of that.”

Instead of conforming himself to popular conceptions of leadership, Wright is content doing what comes naturally to him.  As one of the team’s pillars of consistency, he is determined to demonstrate to the team’s new faces how to make a mark during their respective college careers.

“If you’re not leading by example, then people aren’t going to follow you,” said #42.  “Guys are watching.  You have a lot of eyes on you when you’re a senior leader.”

Wright has always been confident in his abilities on the gridiron, but there is a different kind of confidence that shines forth now.  It is a confidence that comes from a recognition of purpose, which came about after much soul-searching during the offseason.

Not only will Wright be sporting a new name this season, he has a new attitude that he hopes will impact his teammates and please the Tiger fans who are looking for him to emerge as a playmaker on the 2012 Clemson defense.

By the end of the season, Wright is hopeful that Tiger fans will have no problem remembering the new name that he is donning on the back of his uniform.  It is a name he will now carry with him for the rest of his life.