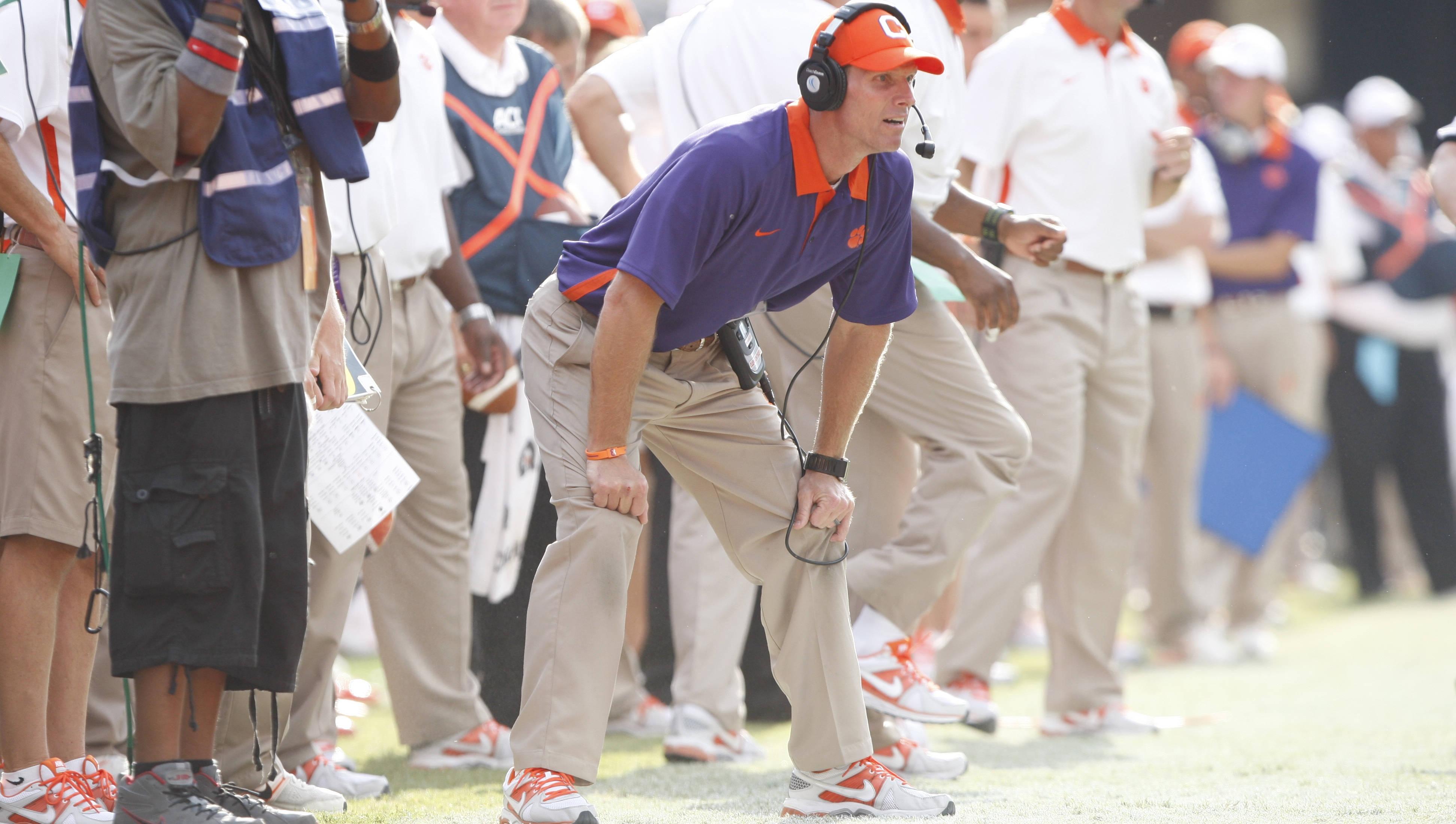 The Upstate of South Carolina is an outdoor paradise. One could say that Clemson is at the center of this wonderful lifestyle with Lake Hartwell and Lake Keowee only a few miles from campus.

On a summer weekend, there is no telling who you may run into on an area lake. Tiger Head Coach Dabo Swinney and his family were on Lake Keowee the weekend before fall practice was scheduled to begin. He passed a boat that was not moving. Minutes later, Swinney’s cell phone rang and first-year Defensive Coordinator Brent Venables was calling. He had run out of gas on the lake. Some 30 minutes later and a tow-ride back to shore, Venables and his family were back on land thanks to his head coach.

Venables may have been somewhat of a novice in regards to boating on Lake Keowee, but there is no question his experience as a defensive coordinator at the highest levels of college football will fuel a resurgence of the Clemson defense in the future.

When Venables made the decision to join the Clemson staff in January, he was leaving behind nothing but great years at Oklahoma. During his time in Norman, the Sooners claimed the 2000 National Championship.

In his 16 seasons as an assistant coach (three at Kansas State and 13 at Oklahoma), the intense and passionate coach was a part of 16 winning seasons with those teams and won 10 or more games 13 times. He coached in nine bowl games that are currently considered BCS bowls and was also a part of two Cotton Bowl squads. The Sooners won 14 consecutive home games against ranked teams as well.

Individual player success was just as evident. He guided an Oklahoma linebacker corps that saw five of his players earn Big 12 Defensive Player-of-the-Year awards. Two Sooner linebackers claimed the Butkus Award, given to the nation’s top linebacker, while two more were finalists for the award. The decision to leave Oklahoma, a place where he had called home since 1999, was not an easy one.

“Change is not easy,” admitted Venables. “The more I have settled in, the more I realize how challenging a move like this is. When you and your family were invested as we were at Oklahoma, the decision to move is a difficult one. I can’t tell you how much my wife (Julie) and family (sons Jake and Tyler, daughters Laney and Addie) have helped during this transition. It has given me even more appreciation of them.”

The change has also proven to be a good one from a professional standpoint.

“Since I have been here, it feels like every day feels new, the first time,” he said. “It’s exciting, but a little unnerving. That is part of the challenge…to grow from a professional standpoint. It has been fun.”

When Swinney contacted Venables in early January, it did not take long for the Kansas native to ponder a move to the Eastern time zone. The success that Clemson has had in the past was a key reason.

“I would not have come here if I didn’t expect it to be like it is,” said Venables. “I say that in a humble way. I saw a very passionate and prideful program. I saw a fanbase that is very hungry for a winner.

“There is no excuse for failure here. I want the chance to play for high expectations and where there is a history and tradition of success. I believe that history has a way of repeating itself. And I believe in the people who are in leadership positions here.”

To understand his coaching style, one only needs to journey back to the early 1990s. After two years at Garden City Community College, he was recruited to Kansas State by Bill Snyder, who is still in charge of the Wildcat program at the age of 73. After lettering as a starting linebacker for two years at Kansas State, Venables was first a graduate assistant and then spent three seasons as the linebacker coach.

Venables learned many valuable lessons from Snyder that are at the core of his coaching foundation to this day.

“There is a mindset and attitude at Kansas State,” said Venables. “Coach Snyder is not a yeller or a screamer, but he is very much about the discipline that it takes to be a success at anything in life. He is not out to trick anyone. It is all about fundamentals and technique, playing with great effort, fighting through adversity, handling prosperity, and demanding the most out of your guys.”

Another valuable lesson learned from Snyder was the team concept that Venables embraces to this day.

“It’s all about the team,” said Venables. “We are the Clemson Tigers. It is not offense and defense. It is a team. There are going to be days where one side is going great and the other isn’t. That is why team football is so important.”

Venables had the distinct pleasure of being a part of Bob Stoops’ staff at Oklahoma. Stoops also coached with Snyder at Kansas State.

Venables was a key cog in reviving the Sooner program to its expected place in college football. The lessons learned from Stoops also have and continue to play a role in the way Venables directs a defensive unit.

“Coach Stoops is at his best in times of adversity,” explained Venables. “He never showed signs of panic. That type of calmness can give you confidence in any situation. I am really fortunate to say I have been around two guys who will one day be in the College Football Hall of Fame.”

The lessons learned from Snyder and then Stoops were evident against Auburn in Venables’ first game on the Clemson sideline. In the final minute, Clemson’s defense was on the field at the end of the contest and stuffed an Auburn drive to seal the victory in the 26-19 win. The victory, for which Venables received a gameball from Swinney, meant a little more than just any win.

“Before the game, I told Coach Swinney that I felt kind of alone,” recalled Venables. “Although I was familiar with everyone, it was a different kind of feeling. To have our team rally together and fight through adverse conditions against a good team on that stage, it was a pretty neat first game at Clemson.”

With the success Venables has displayed leading outstanding defenses for the past 16 years, it is safe to say there will be a number of neat moments in the coming weeks, months, and years.