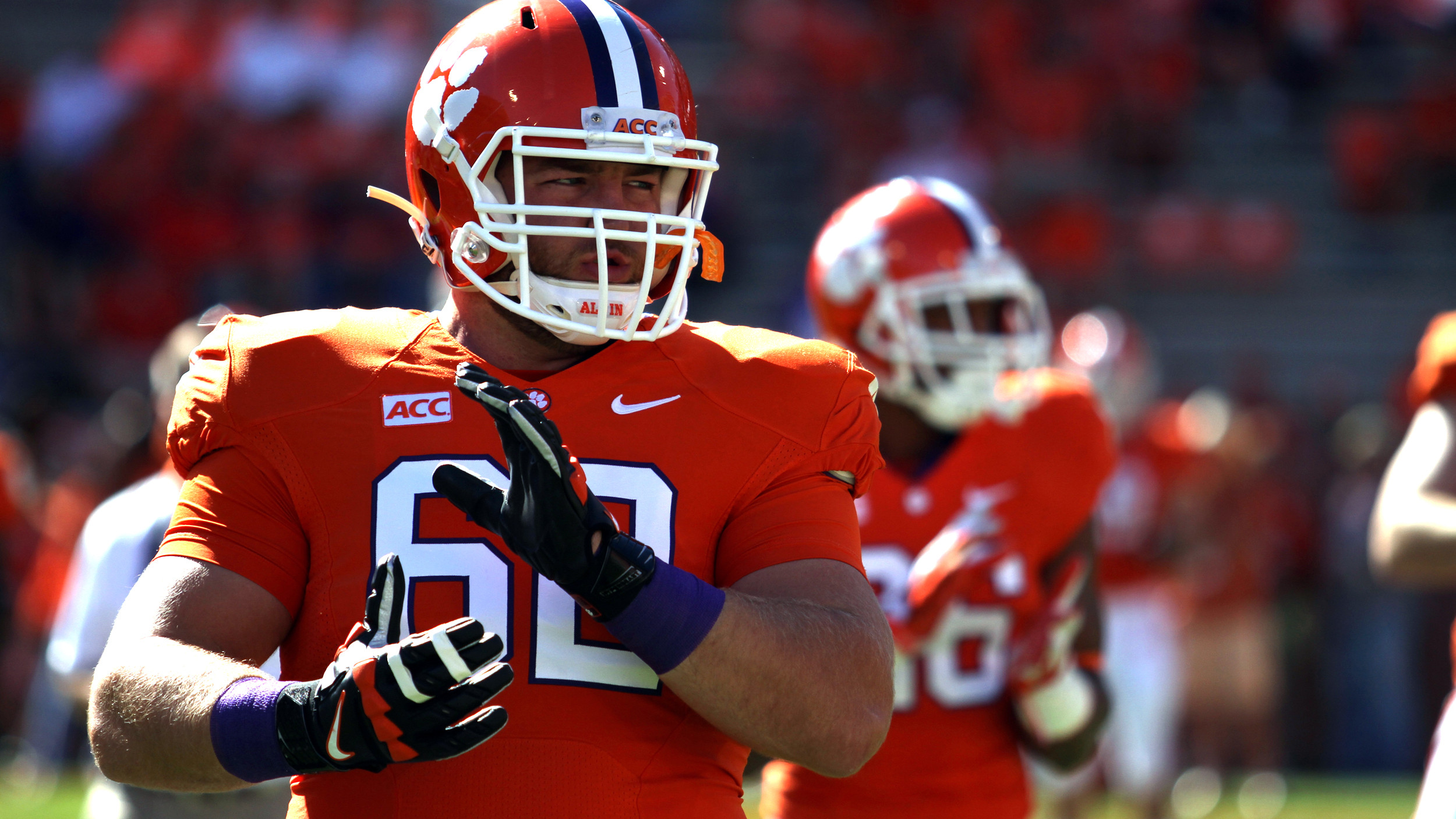 For graduate offensive guard Tyler Shatley, the decision to land at Clemson was an easy one. “I came here and met Coach Billy Napier (now at Alabama),” said the Icard, NC native, who is concluding his second season as a starter on Clemson’s productive offense. “He took me down to the lockerroom and let me meet some of the guys. He told me that Clemson had great fishing at Lake Hartwell.

“That made me think about home when he told me that, and that has been the way I’ve felt about Clemson ever since.”

Shatley arrived on campus at Clemson with a reputation of being a solid all-around player who had versatility. In fact coming out of high school, Tom Lemming rated him as the third-best fullback in the country and Scout.com listed him seventh at that position. ESPN.com rated him as the 17th-best tight end in the nation as well.

Shatley had over 2,000 rushing yards as a fullback, but also averaged 40.7 yards as a punter. Of all the members of the 2009 signing class, Shatley figured to be the most versatile, lettering twice on either side of the line of scrimmage.

Although he was making a big contribution to the defense, the coaching staff recognized that Shatley had reached his maximum potential at that position, and the team had a need for a starter at offensive guard.

“I tried it out, and luckily Dalton Freeman (now with the New York Jets) was still here when I made the switch. He really helped me out a lot. Coach (Robbie) Caldwell is a great coach, so he really helped me as well.”

“We saw that Tyler was very athletic and had quick feet,” said Head Coach Dabo Swinney. “He had what it took to make the switch to the offensive line. He would have contributed significantly on the defensive line, but we believed he could be a starter on offense…and he has been one.”

Since his establishment at offensive guard, the 6’3″, 300-pound Tiger has recorded 54 knockdowns in 1,527 snaps over 21 starts. Clemson has won 18 of those 21 games. Shatley credits Caldwell for his success at a position he never played prior to his junior year at Clemson.

“I have learned a lot of important things, but he really emphasizes the fundamentals, which all the coaches do,” said Shatley. “Coach (Dan) Brooks was the same way on the defensive line.”

“A lot of it (offense and defense) correlates. It’s all about getting your hands on guys and having good footwork so you can move around and gain leverage. It is all about the fundamentals.”

The civil engineering degree-holder, who was the recipient of the Vickery Hall Award last year, made the 2012 Academic All-ACC team and should make that prestigious squad again in 2013. He has effectively transferred his work ethic from the classroom to the gridiron.

“A lot of times, the easiest way to learn in the classroom is to work on it a little bit every night, and that’s how we do it in football,” said Shatley. “You have to work on the small things every day and it builds up. It doesn’t seem like you’re doing a whole lot or you’re making a lot of progress, but over time, it will add up.”

Shatley also had some help from his older brother, Chris, throughout his development as an offensive starter. Chris played football at Concord before he was hired as a graduate assistant in Clemson’s strength & conditioning department.

“It was nice to have someone who you’re close to always there to help out,” said Tyler of his older brother, who recently left Clemson for another job. “He was always a really big motivator. Even when we were younger, I wanted to be better than him so he would stop picking on me. He motivated me, because he wanted me to be a better player.”

In all, his family has grown to be Tigers in their own right. Because Tyler is originally from the state of North Carolina, he has many family members who make the two-and-a-half hour trek to Death Valley for every home game. Shatley’s father, who owns a tire store in his hometown, got the idea to invest in a mobile home for tailgating on seven Saturdays every fall.

When his father found an old airport shuttle online, he began working right away on his masterpiece. The final product, painted orange with #62 decals on every corner of the vehicle, provides the Shatleys with comfortable tailgating arrangements.

“He stripped out the inside and put in a couch, recliner, TV, and surround-sound speakers,” said Shatley. “It has the works.”

The three-year letterwinner and his family have thrived in Tigertown, because they have created an atmosphere with all the comforts of home.

Although it took Shatley a few years to find his home on the football field, Clemson has served as a dwelling place for his development as a young man. Perhaps the biggest reason for Clemson feeling just like home is the fact that he is surrounded by his family.