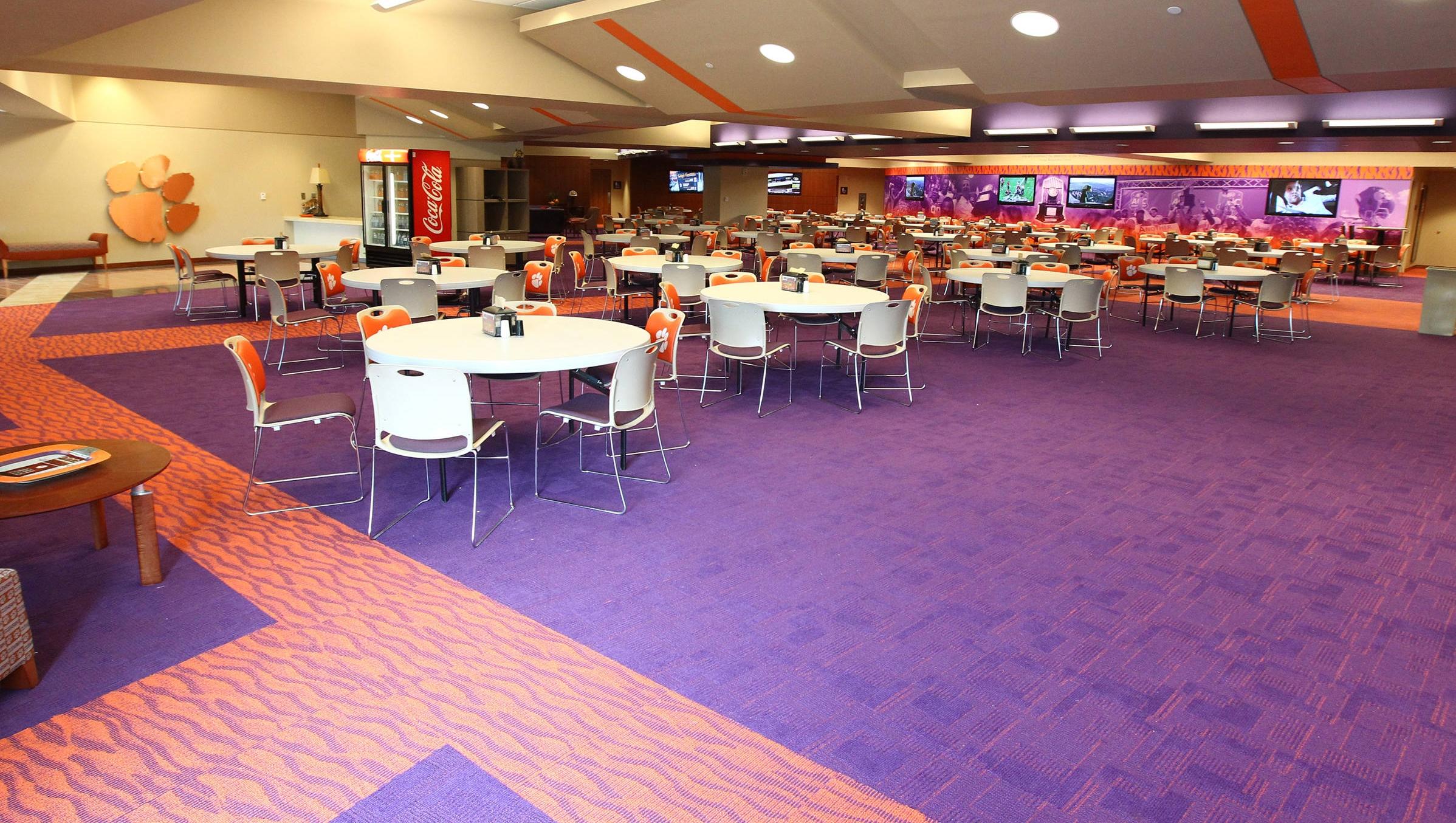 For the past several years, the Clemson Family has been able to enjoy the completed WestZone facility. From enhancing the recruiting experience for potential Tigers, to housing some of the most valued testaments to success in the program’s history, the facility has become an integral part of the very fabric of the gameday experience on campus.

But in spite of its finished exterior, the inner workings of WestZone are still a work in progress in a few areas. One of the major components of the developmental process is the implementation of a training table for the football team.

The training table, named “The Paw” by Head Coach Dabo Swinney, is housed in a 10,000-square-foot room on the second floor of WestZone, and it could be a crucial facet of the continual rise of the Tiger football program to another level of performance.

Click HERE for a 360-degree view of the new facility.

Its existence gives Swinney an opportunity not only to feed his team once per day, but also to help his players develop stronger bonds with one another by hosting team activities within the confines of the football complex.

The Paw is arguably the nicest dining hall on campus. The area can seat between 280 and 300 people, depending on how the furniture is arranged. Planners set aside the space years ago when the facility was still in the design phase, but the actual use was determined over time.

The idea for a training table came out of the need for more focused food preparation and service for student-athletes. Due to the demands required of the dining services staff on campus, the thought was that football could use some support-staff positions specifically focused on promoting health and wellness among the team.

As an outgrowth of this idea, there arose a need for another full-time staff member to help meet the demand. Lisa Chan filled the void as the newest athletic department hire on the sports nutrition side. As a part of the athletic performance team led by Dr. Loreto Jackson, Chan is responsible for helping to promote a healthy environment for student-athletes. Her role is all-encompassing within the athletic department, as her expertise is utilized by all of Clemson’s athletic teams.

Among other things, Chan is tasked (along with the rest of the performance team) with creating choices that both benefit student-athletes on the field of play and are desirable to them. A chef has also been hired to help tailor specific meals to the wishes of the football program.

As The Paw expands its ability to serve, Swinney believes the effects will begin to be more visible among his football players. His staff was first able to see the training table in action during the summer and was pleased with the way the new addition to the football facility contributed to his ability to conduct camp.

“It was a great thing for us during training camp to have this facility,” said Swinney. “It is top-notch and first-class. But once you start school, NCAA rules kick in as far as what you can do. Right now, we can only do one meal a day in our facility.”

Those regulations put in place by the NCAA limit what Swinney and his staff can do in The Paw. But with momentum building at many levels to make sweeping changes to the NCAA rulebook, the Tiger head coach is hopeful that he will eventually get the leeway to give his student-athletes more time to interact throughout the typical day.

“There’s a lot of deregulation talk going on in college football, and the training table is one of those things,” said Swinney. “To me, it’s a no-brainer. We over-train them and we under-nourish them. I’ve never understood that. I’m hopeful that it’s corrected at some point and training tables like I grew up with can come back and guys can eat three meals a day here, to the best of our capabilities.”

This kind of program is making a comeback nationally after the NCAA crackdown on overuse of student-athletes eliminated many of its original functions. Schools like Alabama, Florida, Nebraska, Oregon, Stanford, and Washington already have prolific player-development programs that include a significant emphasis on nutrition. This is another example of Clemson investing necessary resources into the football program in an effort to compete at the highest level.

The Paw is not simply an area where players eat one meal a day. It can also accomplish a variety of functions within the day-to-day operations of the football program. It has the primary function of creating a place for the team to enjoy meals, but in addition, it can also serve to benefit the general welfare of the student-athletes who play football at Clemson. There is lounge seating for relaxation and nine televisions are scattered throughout the room on the walls. Plenty of space is available for players to study as well.

Swinney believes the existence of The Paw is essential as it relates to the well-being and development of Clemson’s football student-athletes.

“It’s a huge part of their performance, not just on the field, but academically,” added Swinney. “When the NCAA rules changed all of that stuff and took away the training tables, they’re kind of at the mercy of others. I think that’s something that we’ve learned.”If Swinney gets his way (if restrictions are loosened, if more meals are allowed, if more time is allotted for coaches to interact with players within the confines of the program), then the impact of The Paw may exceed even the most optimistic expectations given time for all of the pieces to fall into place.

Much like the trademark from which it draws its name, the facility will come to represent the power and drive of a typical Clemson football player over the years.