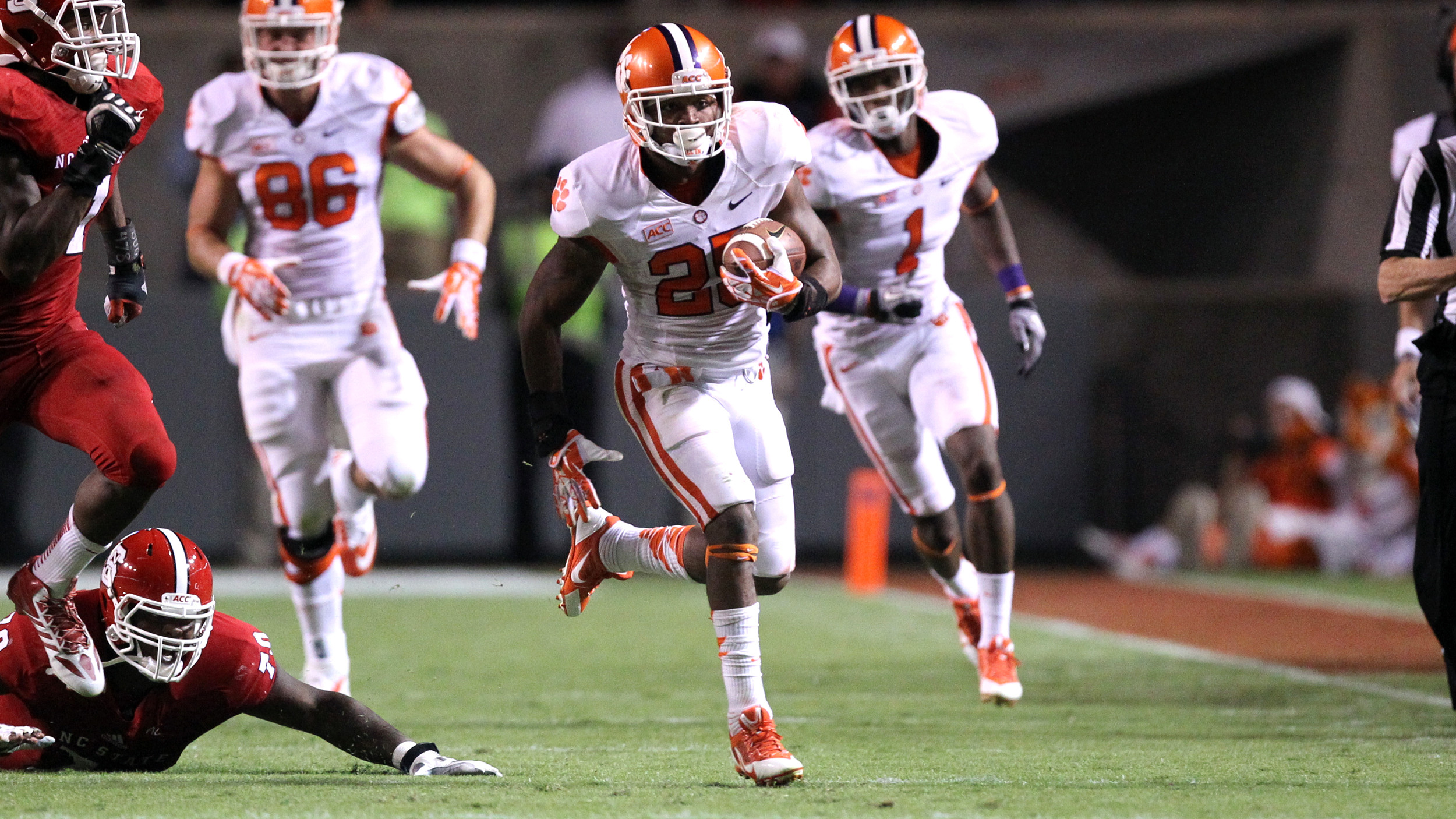 Football Game Program Feature: “Catch Him If You Can”

The aspiration of every college football running back is to reach the all-important milestone of 1,000 rushing yards in a season and to stamp his legacy on a program. At a school with a running back tradition as rich as Clemson’s, 11 running backs have had the distinction of reaching the 1,000-yard mark.

Since Roderick McDowell‘s freshman year in 2009, two Tigers have surpassed the threshold three times, C.J. Spiller (2009) and Andre Ellington (2011,12). After waiting patiently behind those talented veterans, now it is McDowell’s turn.

McDowell’s path to Clemson was an unusual one. Born in Sumter, SC, he grew up in Gamecock territory with Williams-Brice Stadium only 36 miles from his high school. Despite his family connection, McDowell committed to Clemson a year before signing day before most high school juniors could even process where they would like to go to college.

“It really felt like it was home for me,” remarked McDowell. “I prayed about it and my mom told me, ‘hey, if this is where you want go, go there.’ My family, my mom, everyone was a South Carolina Gamecock fan. It was a decision that I made, and I stuck with it. I made the best decision overall.”

When he first committed, Tommy Bowden was Clemson’s head coach, but McDowell did not waver once Dabo Swinney was named interim and later head coach during the 2008 season.

“I made a decision not just about the coach, but because of what I wanted to gain throughout my college career as far as education and playing football.”

Only 12 players comprised McDowell’s signing class, and shortly thereafter was dubbed the “Dandy Dozen” by Swinney. That brave group now boasts plenty of school records with the opportunity to shatter even more during the final three games of the season. The class has a chance to become the second-winningest, four-year group in school history.

When McDowell stepped foot on campus, he knew he would not play immediately. Spiller was entering his final season as a Tiger and was one of the leading contenders for the Heisman Trophy. Ellington and Jamie Harper were both talented backups who already had a grasp of the offense.

“I didn’t come in thinking I was going to play right away,” admitted McDowell. “My mindset coming here was to learn as much as possible. As a freshman, you want to learn and know whatever it takes, so when your chance comes, you are ready. For me, I told myself I wanted to take my running game to the next level.”

After red-shirting in 2009, McDowell got his opportunity following Ellington’s injury toward the end of the 2010 season and registered 177 rushing yards that year. With Harper and Ellington shouldering the load in the 2011 season, McDowell saw limited action.

Despite the lack of playing time, McDowell refused to give up after the advice of his late uncle, Freddie Solomon, a former NFL star with the San Francisco 49ers.

“He told me to never give up,” said #25. “He said times are going to be hard and there’s going to be times when things will be in your way. Just go in there and keep fighting and do what you can do. This is nothing but a testimony and a test for you.”

McDowell’s mother also continued to push him and left him with a message crucial to his football philosophy.

“My mom told me if you’re going to quit, quit here, you will quit in life, and I told her I’m never going to. I’m not a quitter.”

As he entered his junior season in 2012, many people had forgotten about McDowell, but he made his presence known early in Clemson’s opener against Auburn, as he became the first Tiger to score a touchdown in 2012, a contest that Clemson won by seven points.

McDowell continued to build off his performance, and by the end of the season, he had cemented himself as the second-string running back behind Ellington, amassing 450 rushing yards and five touchdowns as a backup.

Despite an impressive junior campaign, people continued to write off McDowell as the Tigers prepared for an epic showdown against #5 Georgia, a battle of top-10 teams and the renewal of an old rivalry. He had an outstanding first game as a starter, rushing for 132 yards on 22 carries, averaging six yards per carry, as Clemson defeated the Bulldogs 38-35.

After getting banged up in the S.C. State game, McDowell has bounced back and had a 161-yard and two-touchdown performance at Maryland on October 26. Combined with Sammy Watkins‘ 163 receiving yards, he was part of the first duo in Clemson history to have a 160-yard rusher and 160-yard receiver in the same game.

“I didn’t feel like I had 30 carries, it felt like less than that,” stated McDowell. “It felt like I was in high school again with all those touches. I told Tajh (Boyd) before the game that I’m going to take some pressure off him. I was feeling it. After the game, I saw the stats and couldn’t believe it. I wasn’t even tired…I could have played some more.”

With a team-high 737 rushing yards, McDowell has the opportunity to become the 12th 1,000-yard running back in Tiger history, joining former teammates Spiller and Ellington, who are now both in the NFL.

Mentored by some talented players, McDowell continues to work with and teach the younger running backs, much like others did for him.

“I want to tell my young running backs to work hard, put God first, walk by faith, and never give up, because as soon as you do, the devil will sneak in and everything will come crumbling down. When you walk by faith and have a mindset you want to be successful by Christ, everything will be fine.”

While the NFL may be one goal, McDowell wants to use his circumstances to mentor not just his teammates, but to make an impact in the community. He strives to teach younger kids the value of reaching and achieving their dreams through hard work and perseverance.

“Growing up, I saw the bigger picture,” continued McDowell, who graduated on May 10, 2013 with a degree in sociology. “I saw myself going out and making an impact on the world, taking the blessing and talent I was given, which is football, and opening up to kids. I want to mentor kids and show them that the sky is the limit. If you buy into what’s right, the right things will come out of it.”

McDowell’s character on and off the field is the ideal for the university he plays so hard for every Saturday. His career as a Tiger is a testament to the value of hard work and determination to succeed on the field.

Roderick McDowell will achieve any goal he sets his mind to, not just on the gridiron, but in life, a fitting Clemson legacy.