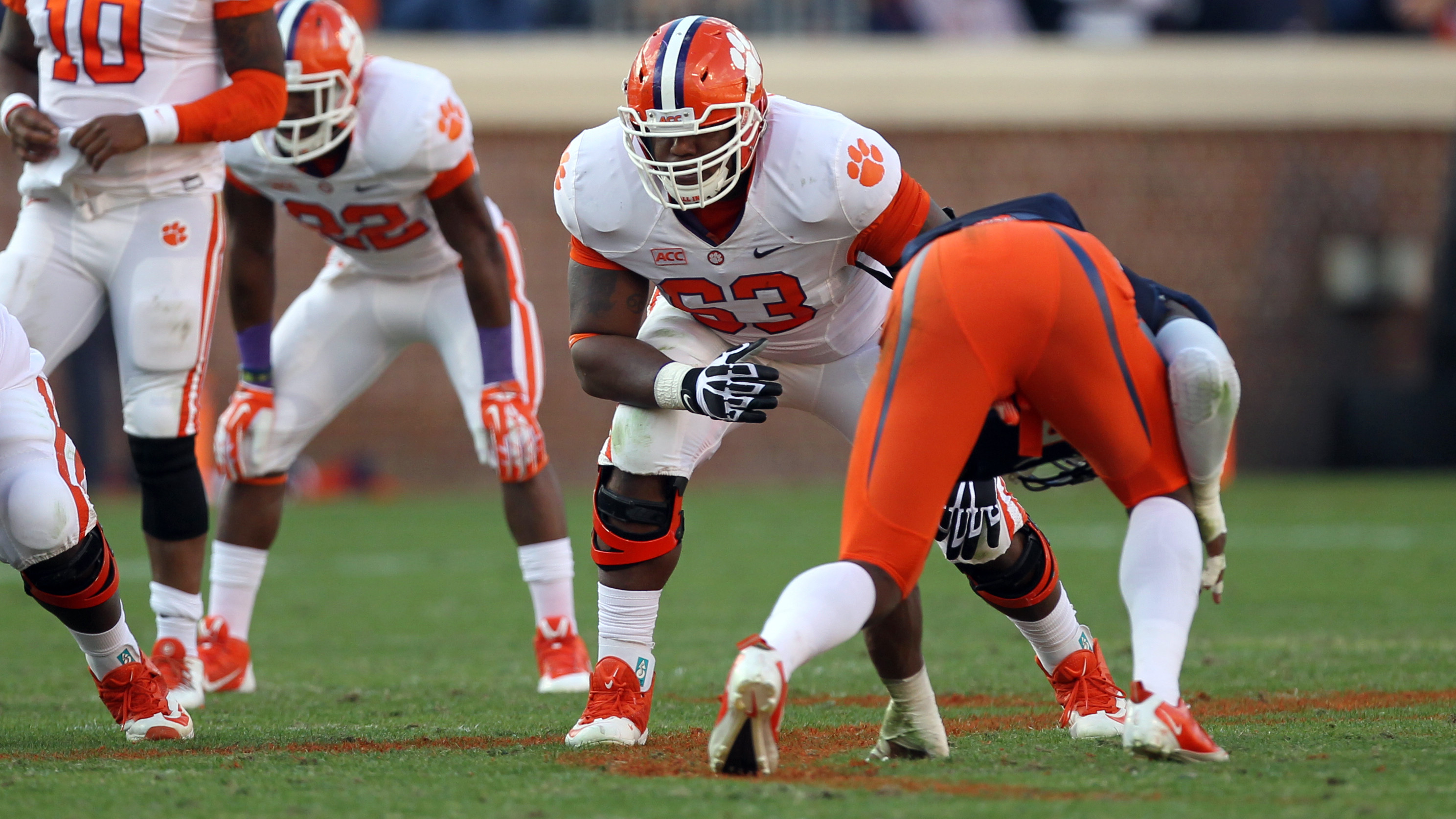 Clemson features one of the fastest and most high-powered offenses in the country, averaging 507 total yards.  While the likes of Tajh Boyd and Sammy Watkins deservedly get a lot of the notoriety, the offensive line plays a crucial role in keeping it going.

The Spartanburg, SC native played football at Dorman High School, and while staying close to home was a factor in choosing Clemson, Thomas was impressed by something else.

“I remember when I came to my first game at Clemson, the game atmosphere was like nothing I had seen in the ACC at that time,” he recalled.  “I went to a lot of games, but nothing was like the environment and family-like atmosphere here.  It was also close to home, so that meant my mom could come to the games any time.”

Thomas entered Clemson in 2009 and red-shirted during his first season in Tigertown.  He was named to the ACC Academic Honor Roll that season.  Despite his academic success, Thomas admitted that he had some growing up to do.

“When I first got here, I was very immature.  In getting acclimated with the program and with the older guys helping me out, I matured and showed that I could be helpful on the field.  I gained the trust of the coaches in practice, which led to more playing time.”

As a red-shirt freshman in 2010, Thomas played 136 snaps over 10 games and recorded four knockdowns.

The following season in 2011, he saw significant playing time, appearing in 13 games while making 10 starts.  He registered 39 knockdowns in 777 snaps over the course of the season.  He had a breakout game against defending National Champion Auburn when the ACC Tigers gained 624 yards.  Thomas played a big part in it through his run blocking and pass blocking, as Clemson ended the nation’s longest winning streak at 17.

Thomas made his first start the next week on September 24, as the Tigers hosted #11 Florida State.  He played 70 snaps in the game and even caught a deflected pass in Clemson’s 35-30 win.

Thomas went on to have a solid first season as a starter, as the Tigers won the ACC Championship with a 38-10 win over #3 Virginia Tech in Charlotte, Clemson’s first ACC title in 20 years.  He graded a season-high 86 percent while playing 68 snaps at two different positions.  That game stands out in Thomas’ mind as one of his best as a Tiger.

“I would have to say my favorite game so far is a tie between the regular-season game against Virginia Tech in 2011 and the ACC Championship Game,” he stated.

“We went up there as so-called underdogs and beat them at their place in the cold weather by 20 points.  That was pretty big.  Then we beat them in the ACC Championship Game.  It was cool to see all the oranges thrown onto the field and players ripping them open with their mouths.  It was an exciting moment.”

Following on his success in 2011, Thomas started all 13 games as a junior in 2012.  He played a team-high 987 snaps, including all 102 plays in the Tigers’ dramatic 25-24 win over #7 Louisiana State in the Chick-fil-A Bowl.  He was also named ACC Offensive Lineman-of-the-Week against Duke on November 3.

“Last year, I knew it had to click for me, because we had a young offensive line,” explained Thomas.  “The only people coming back that had really played were Dalton (Freeman) and me.  I knew Dalton couldn’t do it all, so I knew I had to step up and be a leader as well.

“I tried to take some of the younger players under my wing and get them to come along, and I think that also helped me.  It helped me become more mature, because I still had a long way to go myself and it helped me continue to try to perfect my game.”

This season, Thomas has been the consistent, solid player who many would expect from a fifth-year player.  He has consistently graded as the top lineman on the team and has received a lot of high praise from his coaches and teammates this season.

Following the Tigers’ tough loss to #5 Florida State earlier this year, Offensive Coordinator Chad Morris, while critical of his offense, was very complimentary of Thomas’ performance.

“Brandon Thomas is playing really well, extremely well, dominating well, and that’s good to see,” said Morris.  “We’re consistently inconsistent right now (as an offense), and we have to get it fixed.  Brandon is the only one of our starters playing well at this time.”

“He’s a great leader,” said Norton.  “It’s a challenge for us to respond to how well he’s playing.  The 10 players who aren’t playing as well need to respond, and Brandon just needs to keep doing what he’s doing.”

The Tigers responded following that loss with a 40-27 win at Maryland the following week.  Thomas was named ACC Offensive Lineman-of-the-Week for his play against the Terrapins.  He then graded 96 percent in 51 snaps with a team-high seven knockdowns in the win at Virginia.  That is the highest film grade awarded by veteran Offensive Line Coach Robbie Caldwell in his three years at Clemson.

With just three regular-season games left in his Tiger career, Thomas looks to finish strong to cap off his already successful season.

“I have played pretty well the last few weeks, but it is all about finishing here,” he said.  “I think that is what people see.

“‘He played well over the season, but those last few games, he actually finished.  He led the team and the offensive line.’  That is what I want to happen.”

For Thomas, his ultimate goal is to play football at the next level.  Having already graduated with a degree in secondary education, he also has aspirations outside of the game when his playing days are done.

“I want to teach and coach at the high school level,” remarked Thomas.  “I hope to go back to school and get my master’s degree in guidance and education.  From there, much later down the line, I would like to go to law school and open my own firm.”

But for now, he is focused on opening holes for Clemson running backs and protecting Boyd’s blindside.