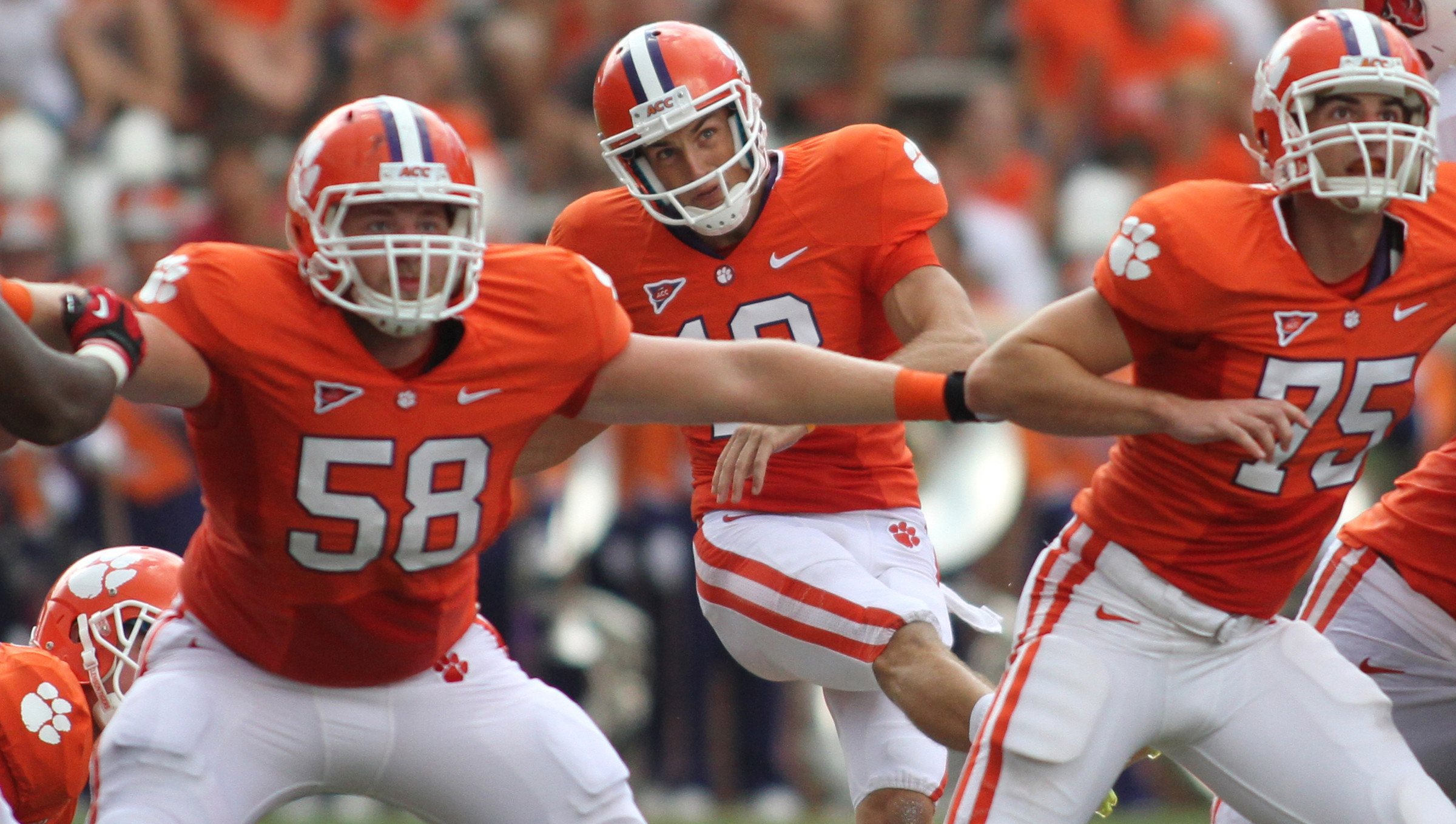 A family away from home is how Spencer Benton referred to his Clemson football teammates in a recent interview in the WestZone. The 6’1″, 195-pound punter and placekicker serves as a leader to his teammates in his fifth year with the program.

“It’s been a journey,” said Benton. “When you’re a freshman, it’s a growing process. Once you get to that senior role, you get an understanding for the program and how well the coaches want the leadership to be.”

He has certainly made a mark at Clemson, setting a school and ACC record with a 61-yard field goal against Ball State in September. It is the longest field goal in the nation this season and the longest by an FBS player in the last four years.

He is perhaps the most well-rounded special teams player at Clemson since the days of Chris Gardocki (1988-90). Not only does Benton kick off and punt, he is the long field-goal kicker, the holder for placekicks for Chandler Catanzaro, and has been known to run the ball or throw the ball on fake field goals. And by the way, he will make a crushing tackle on a kickoff return when called on. He has done that better than any other kicker in Clemson history.

Benton aims to improve not only personally, but as a team each day at practice. The two-time member of the ACC Academic Honor Roll leads by example on and off the field.

“One thing I’ve learned is leadership doesn’t have to be verbal,” explained Benton. “You can lead by your actions on the field, how you play, and in the classroom.”

Benton has overcome injury and pressure in close-game situations by pushing forward and maintaining a competitive mentality to succeed one day at a time.

With a standout high school career as both a wide receiver and kicker, Benton attracted the attention of many college coaches and was offered by Duke, Georgia Tech, Notre Dame, South Carolina, and Virginia in addition to the Tiger program.

Benton made 22 field goals and 99 extra points at Myrtle Beach High School. He also played wide receiver, with 410 yards and four touchdowns as a senior.

He chose Clemson with the guidance of Swinney.

“Going through the recruiting process, I was able to talk to a lot of coaches. Coach Swinney was the recruiting coordinator at the time and he came to my high school full force with energy, enthusiastic as can be, and sold it to me.”

Following his high school graduation in December of 2007, Benton enrolled at Clemson in January as a gray-shirt. In the fall, Benton red-shirted.

Benton quickly began setting records in his first season on the field in 2009. He handled every kickoff duty for the Tigers. He also had nine special teams tackles on kickoff coverage, establishing a single-season and career record that was previously held by Mark Buchholz.

Benton has continued to be outstanding in that area and has 27 career special teams tackles, more than three times as many as any other kicker in Clemson history.

Benton saw more action on special teams in 2010 with his six tackles on kickoff coverage. Clemson had a 4.4-yard advantage in average starting field position after kickoffs that year, thanks in large part to Benton’s right leg.

The 2011 season posed some challenges for Benton when he suffered a shoulder injury in the Virginia Tech game on October 1, which forced him to miss four games.

“When Spencer went out, it was a big loss for us,” stated Swinney. “He does so much with the special teams. When he goes out, it is like losing three players. He has to be one of the more versatile special teams players in the nation.”

The Clemson kicker set an ACC record on September 29, 2012 against Ball State when he drilled a 61-yard field goal from the right hashmark to close the first half. It was the longest field goal in ACC history, surpassing the 60-yard mark set by Florida State’s Gary Cismesia in 2007.

“After a lot of long practice kicks, it was great to see it happen in a game,” said Benton. “The coolest thing was to see the fans. This year, I grasped the idea that the fans want you to succeed. There is a lot of pressure out there, but you try to focus on being successful.”

He also booted a 58-yard punt earlier this year and became the first Tiger in history to register both a punt and field goal of at least 58 yards in the same season.

“Personally, I am striving to be the best I can be in every area,” said Benton. “I want to be in the top five in the nation in total touchbacks. I’d like to make it to the NFL. That’s been my dream.”

The bar is set high for Benton and the Tigers, but this team-oriented leader believes that performing at practice and approaching each day with the same mentality to succeed will have its benefits.

“For the team, we want to keep getting better week in and week out. We’re still striving for that perfect game, and perfection is something we can always chase.”

Benton and the Tigers will continue to chase perfection as they near the end of the regular season and hope to make it to another BCS bowl game.

“You have to get within yourself and zone everything out and execute, just like at practice,” added #13.

Benton is a Tiger who leads by example each day, all-the-while setting records, making him one of the most remarkable all-around student-athletes at Clemson.