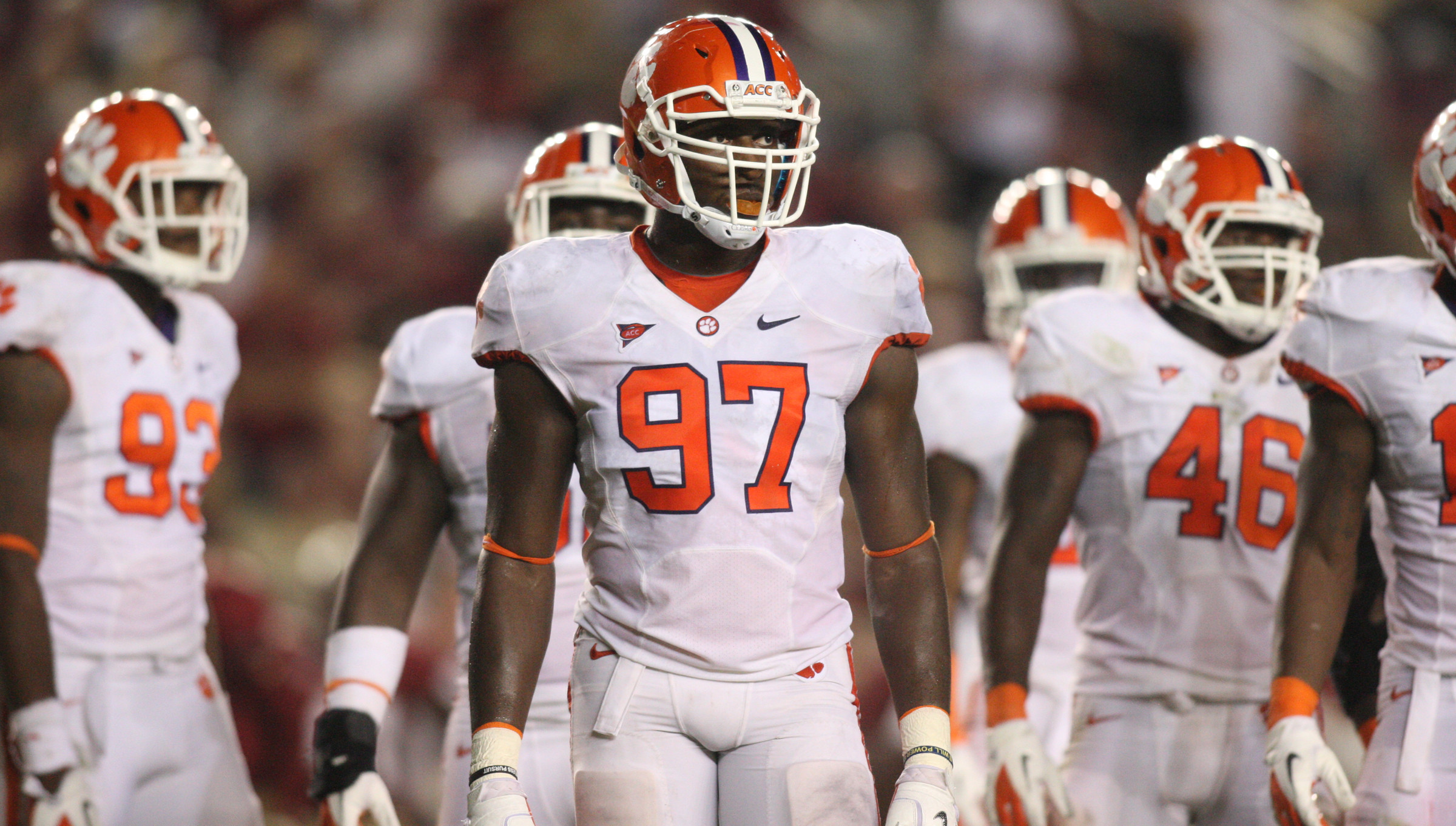 Over the past decade, the Tigers have been proud to claim some of the best defensive ends as their own. Defensive ends like the late Gaines Adams, Ricky Sapp, and Da’Quan Bowers will forever be ingrained within the lexicon of Tiger fans, bolstering the tradition that has long been a hallmark of Clemson football…defense.

Fast-forward to 2012, and there is another Tiger defensive end following in the footsteps of Adams, Sapp, and Bowers, carrying the mantle for the defensive line through hard work and dedication.

Hailing from Florence, SC and measuring in at 6’4″ and 270 pounds, senior Malliciah Goodman certainly fits the mold. Known for his behemoth hand size, measuring 11.5 inches from pinky finger to thumb, his size XXXXL football gloves encase his powerful hands.

Goodman’s massive arms create a wingspan comparable only to a small jet, allowing him to wreak havoc on opposing offensive lines. They have enabled him to total a team-tying-high two caused fumbles in 2012 and six career caused fumbles.

When looking at the imposing figure of Goodman flying around the gridiron, it seems apparent this young man was destined to play football as a defensive end.

Looking back eight years ago, playing football in Clemson, SC was the last place Goodman could have envisioned himself being.

“I didn’t even play football until the eighth grade,” admitted Goodman. “A lot of my friends played football, and throughout seventh grade, they kept trying to get me to try out and play.

“Eventually, they convinced me. I gave it a shot and I made the team. From the start, I fell in love with the game, but I never dreamed I’d be playing football in college one day.”

But for Goodman, the dream he could not envision suddenly became a reality. His natural football ability shined through and attracted college football coaches from around the country. By the droves, they flocked to Florence to check out the massive defensive end, who was rolling through offensive lines like a wrecking ball.

After racking up 73 tackles, 27 tackles for loss, and 15 sacks in nine games as a senior, Goodman was named the #1 player in South Carolina by Rivals.com, a finalist for Mr. Football in South Carolina, and represented the Palmetto State in the Shrine Bowl and U.S. Army All-American game.

“I knew about Clemson pretty well,” said a smiling Goodman. “Clemson, being an in-state school and in a great part of South Carolina, really appealed to me. Columbia and the University of South Carolina were too much of a city area for me.

“Clemson reminded me a lot of home…laid back and quiet. I knew it was a place where I could focus on getting a great education and playing football.

“I also loved the family atmosphere. The coaches, staff, and players are truly one big family. I loved that more than anything about Clemson. I committed to Clemson early.”Goodman graduated from high school in December of 2008 and arrived in Tigertown soon thereafter. From the get-go, he loved playing for the Tigers.

“There’s no place better than Clemson on gameday,” beamed Goodman. “The atmosphere is incredible.

“During the week, Clemson is a quiet place. You see traffic around campus and students moving around, but that’s about it. But on Friday, the place gets crazy and people are packed everywhere. Orange is everywhere, cars are everywhere, and people are walking around everywhere. When we pull up for Tiger Walk and see all those tailgaters and the traffic pouring in, that’s special.”

Like the raucous gameday atmosphere in Death Valley, the past four years with Goodman have also been special. In his freshman campaign, Goodman was named co-rookie-of-the-year by the Clemson coaching staff and named freshman All-ACC by Rivals.com, playing all 14 games and averaging 24 snaps per game.

As a sophomore in 2010, Goodman showed steady improvement, notching 32 tackles, three tackles for loss, one sack, six quarterback pressures, and three caused fumbles (tied for second-most in the ACC). He was one of the reasons Clemson finished in the top 15 in the nation in total defense and scoring defense.

Last year, Goodman contributed greatly to Clemson winning its first ACC Championship in 20 years. He had 59 tackles, four tackles for loss, two sacks, and 14 quarterback pressures in 767 snaps over 14 starts. The 767 snaps are the most ever by a Tiger defensive lineman. For his outstanding performance in the ACC Championship game against #3 Virginia Tech, Goodman was named team co-defensive player-of-the-game.

This season, Goodman is anchoring the defensive line as the only returning starter from last year’s squad. Using his experience and skill, he has helped guide the defensive line to steady improvement throughout the 2012 season. The Tigers are currently ranked #9 in the nation and are hoping to earn a BCS bowl bid for the second straight year.

Goodman and the senior class has 34 victories heading into today’s contest against N.C. State. One more win will make this class eighth in Clemson history in victories.

Although the fun is in the winning, Goodman cited his teammates and coaches as the most special part of being a Tiger.

“It is an incredible bond. We’re with each other through winter workouts, summer workouts, through camps, and through the season. We spend so much time together that we become a family. They’re all my brothers.”

Goodman will graduate from Clemson with a sociology degree and has his eyes set on a career in the NFL. Although he may soon leave Clemson, he realizes that Clemson will never fully leave him.

“Clemson and the opportunities I’ve had here mean everything to me,” stated Goodman. “I’m the first person in my family to attend a Division I school. I’m very proud of that.

When I have kids of my own one day, I know I’ll be able to smile and tell them that I went to Clemson and played football there.

“Not many people get that opportunity. It’s been a real blessing in my life to come here and grow as a man. Clemson has been great for me and it’s prepared me for whatever the next step in my life will be.”

And for a young man as determined to succeed as Malliciah Goodman, that next step will undoubtedly be one that makes Clemson University proud.