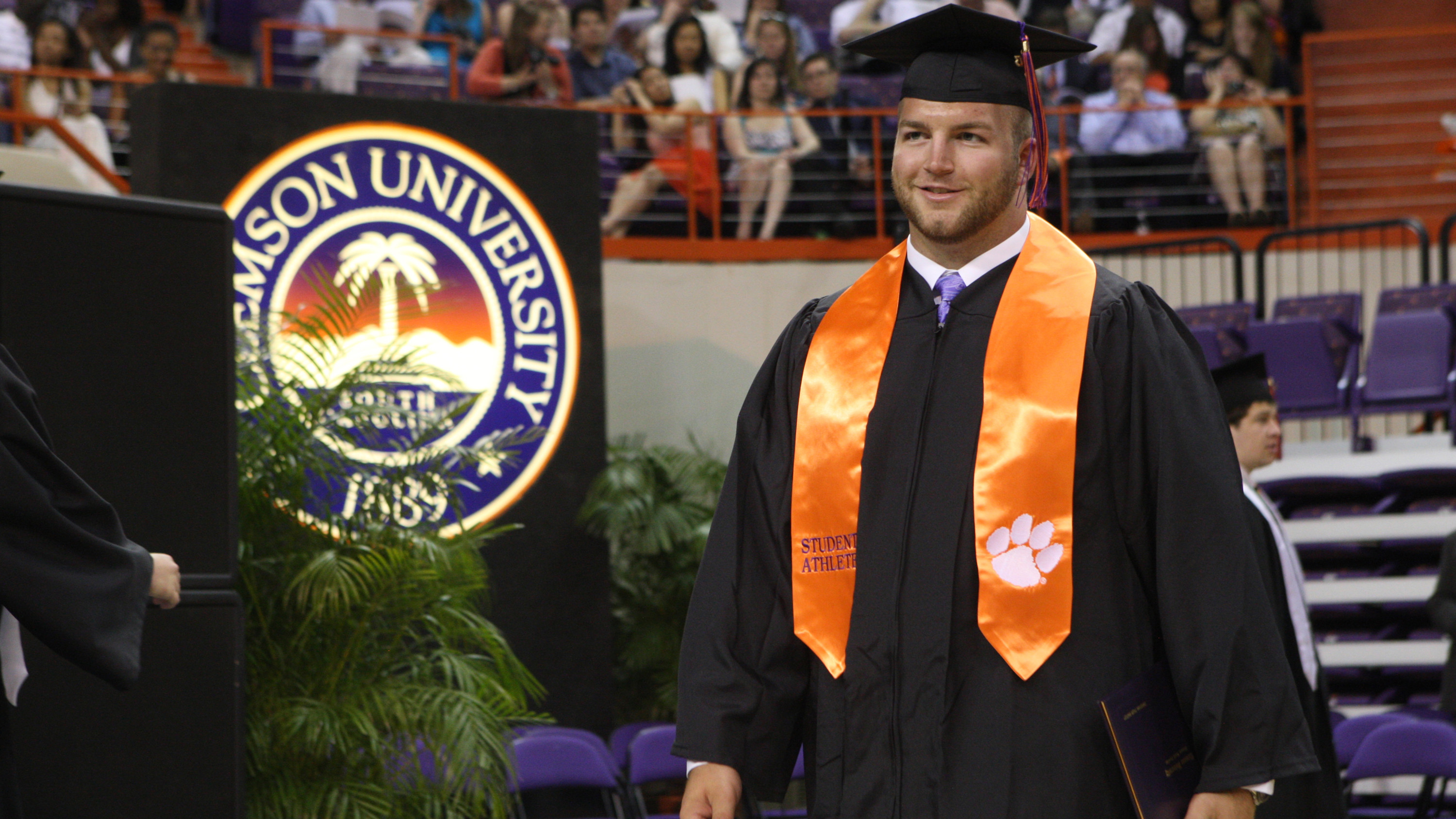 Clemson has been very successful on the field in recent years under Head Coach Dabo Swinney, including an 11-win season in 2012 and an ACC Championship in 2011. The rate of success has been just as noteworthy in many areas, including the classroom.

Below is a series of notes about Clemson’s success in the classroom in terms of graduation success rate, GPA, and other barometers.

ACADEMICS & ATHLETICS BALANCE For the 2012-13 academic year, Clemson was one of five schools in the nation in the top 25 of both the U.S. News & World Report public institutions and the final 2012 USA Today coaches poll, an example of academics and athletics working together at the highest level.

Clemson was #25 in last year’s U.S. News & World Report’s list of public institutions (Clemson was recently ranked #21 in the 2013-14 list) and finished #9 in the USA Today coaches poll. The other institutions in the top 25 of both for the 2012-13 academic year were Florida, Georgia, Texas, and Texas A&M.

TOP SEVEN IN APR SCORES Clemson has been in the top seven of the APR each of the last two seasons, one of just five schools that can make that claim. The others are Northwestern, Duke, Boise State, and Ohio State. Clemson has a three-year streak of being in the top-10 percent of all FBS schools.

In 2011, the Tiger football team posted a 983 APR score, the seventh-best mark in the nation among FBS schools. The score was second-best in the nation among schools who finished 2011 in the top 25 of the AP poll. Only Boise State (989) was better among the top-25 schools.

In 2012, the Clemson football team improved to a 985 score and a tie for fourth in the nation. Clemson was the only program to finish in the top 10 of the USA Today poll and post an APR score of at least 980.

Thirteen FBS programs were honored by the NCAA for being in the top-10 percent in the 2012 season. The list included ACC schools Boston College, Clemson, Duke, and Georgia Tech. The ACC was the only conference with four schools on the list.

Clemson, Alabama, and Stanford were the only schools in the nation in the top 10 of the final USA Today poll and in the top-10 percent of APR scores.

Clemson joined Boise State, Duke, Northwestern, Ohio State, Rice, and Rutgers as the only schools to be in the top-10 percent of the APR for college football each of the last three seasons.

“One of the things we talk about with our players is developing to the best of their abilities in every area,” said Head Coach Dabo Swinney. “We have had consistency when it comes to graduation rate and academic progress. It reflects on the team’s overall commitment to being the best.

“I want to thank the staff at Vickery Hall for their work with our student-athletes. Their level of dedication is reflected in us being one of the few schools to be in the top-10 percent each of the last three years.”

EIGHT CURRENT TIGERS WITH DEGREES A total of 48 Clemson student-athletes earned academic degrees over the course of three graduation ceremonies at Littlejohn Coliseum in May of 2013. The list of graduates included eight football student-athletes who are members of the 2013 team.

Overall, nine current or former Tiger football players earned degrees in May. Chandler Catanzaro (biological sciences) and Brandon Thomas (secondary education) both earned All-ACC honors on the field in the fall of 2012 and are leaders of Clemson’s 2013 team. Other Tiger football players on the field this fall with a degree on their resumé are Phillip Fajgenbaum, Roderick McDowell, Donny McElveen, Tyler Shatley, Spencer Shuey, and Darrell Smith.

The list of May graduates also includes NFL player Jamie Harper, who turned professional after his junior season in the fall of 2010, but came back to earn his degree.

Head Coach Dabo Swinney has had 72 senior lettermen in his four full seasons as head coach, and 65 of those players have graduated (90 percent). The seven who have not are all on NFL rosters at this time. All 13 seniors on the 2012 team have graduated with Clemson diplomas, including 10 who were in NFL camps this past summer.

2012 ALL-ACC ACADEMIC TIGERS Only Duke had more than the six selections from Clemson on the 2012 All-ACC Academic football team. It marked the second straight year that was the case and it marked the sixth straight year Clemson had at least five student-athletes named to the team.

The program has 29 All-ACC Academic selections since Dabo Swinney took over as head coach in October of 2008, more than any other five-year period in school history.

Jaron Brown, Brandon Ford, and Dalton Freeman were all seniors on Clemson’s 2012 team that finished with an 11-2 record and a #9 ranking in the USA Today poll. They were joined on the team by 2013 returnees Chandler Catanzaro, Tyler Shatley, and Gifford Timothy.

Five of Clemson’s 11 starters on an offense that averaged 41 points per game, best in the ACC, were named to the All-ACC Academic team.

Brown was named for the third time to the All-ACC Academic team. He and Freeman are just the 13th and 14th Clemson football players to make it at least three times. Brown, who graduated with a degree in management, was also named to the CoSIDA Academic All-District team. He finished his career with 87 receptions for 1,186 yards in 50 games (32 starts).

BROWN & FREEMAN HONOREDDalton Freeman and Jaron Brown were both honored in May by their selection to the National Football Foundation Hampshire Honor Society. The society recognizes college football players at all levels who have been outstanding players on the field and finished their academic careers with a GPA of at least 3.2. Only student-athletes in their final year of eligibility are eligible. Freeman and Brown were two of 11 ACC players who were named to the Hampshire Honor Society.