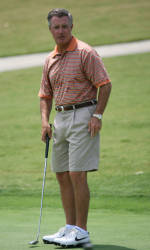 Exclusive video footage from Head Coach Tommy Bowden’s 2007 Media Golf Outing held earlier this summer is now available on www.clemsontigers.com on Clemson Tigers All-Access. Fans can follow Coach Bowden and three Tiger assistant coaches as they play a round of golf with members of the media at The Reserve at Lake Keowee.

In addition to Coach Bowden, fans can also follow along with Associate Head Coach/Offensive Line Coach Brad Scott, Recruiting Coordinator/Tight Ends Coach Billy Napier and Running Backs Coach Andre’ Powell as they compete along with members of Clemson’s media in the captain’s choice golf tournament. All four coaches were mic’d, so in addition to watching the action, fans can listen to the coaches’ commentary throughout the day.

Expect to see more video on all of Clemson’s athletic teams as the 2007-08 season begins. Interviews with current and former Tiger athletes and video tours of Clemson facilities will be available along with other behind the scenes footage of Clemson athletics.

Fans can log on to All-Access by clicking on the Clemson Tigers All-Access link on the front page of www.clemsontigers.com and signing up for an account. Footage from the golf outing is located in the Football section under Features and Interviews.