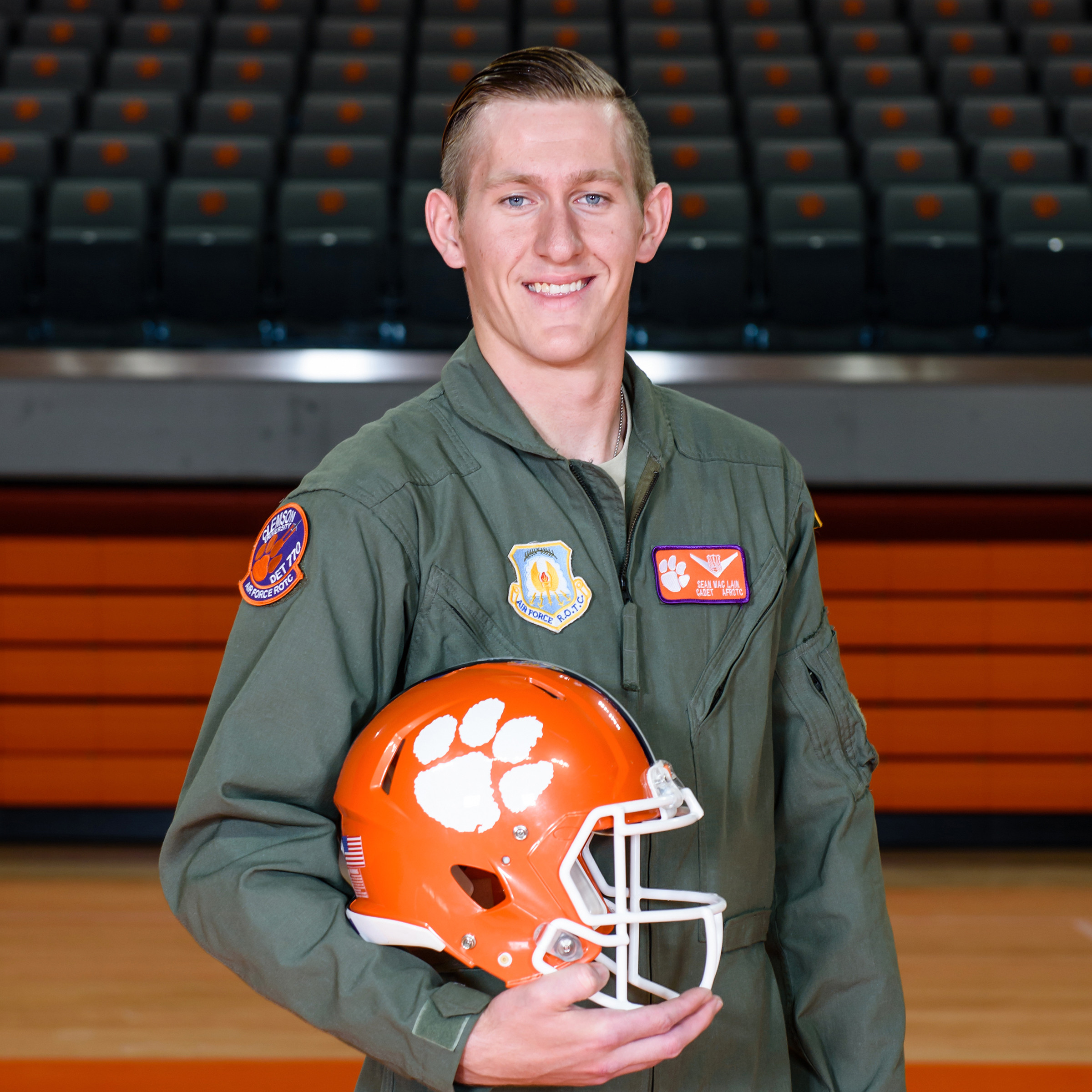 Sean Mac Lain has always aspired to touch the sky, both literally and figuratively. Now a senior wide receiver for the Tigers, Mac Lain is in the midst of having his lifelong dreams take flight. He still fondly recalls ogling at an A-10 Warthog at an air show when he was eight and telling his father, “Dad, I want to fly that when I grow up.”

Although his father, Lt. Col. Michael Mac Lain of the United States Air Force, calmly and carefully informed his young son that planes of that caliber were on the verge of becoming obsolete, the dream never lost its wings.

A member of Clemson University’s Air Force ROTC program, Mac Lain will graduate in the spring as a second lieutenant in the Air Force and, soon after, will begin training to become a drone pilot. Incredibly excited to follow in his father’s footsteps, he is also thankful for all that he has gleaned from the ROTC detachment at Clemson.

“The ROTC program fits perfectly with the football program. It’s a great family environment, and they’ll bend over backwards to help you and make sure that you’re taken care of.”

Like all Clemson football players, Mac Lain has greatly enjoyed taking part in the memorable pregame customs, but the unique tradition of running down the Hill has had an especially significant impact on the history major from Hope Mills, N.C.

“It was loud and it was deafening,” recalled Mac Lain as he relived Clemson’s clash with Georgia at Memorial Stadium in 2013, Mac Lain’s first game as a Tiger. “I ran down the Hill and got to the sideline and forgot about running down the Hill. It was surreal.”

“I don’t think anyone does Military Appreciation Day better than Clemson, with the rich military heritage that we have at this school. Everyone plays for something different. Some people play for their families. Some people play for themselves. I love that we have one game to dedicate to the military men and women of America and show them, through our playing of football, that we really appreciate what they do.”

Molded by the close relationship that he shares with his father, Mac Lain prides himself in the values that his dad instilled in him.

Inspired by his father’s unwavering commitment to his family and his extended family, the Air Force, Mac Lain aims to stay true to those devotions in his adult life as well.

“I model a lot of the things that I do after my dad. Being able to watch him work has provided me with knowing what I want to do and where I want to go.”

Mac Lain’s older brother, former Tiger All-ACC offensive lineman Eric Mac Lain, is another inspirational figure in Sean’s life, and garnering the chance to play with him at the college level was a fulfilling experience.

Clearly a young man heavily impacted by family, Mac Lain does not take the familial aspect of Clemson football for granted. In fact, he has a distinct appreciation for what it means to be a member of the Clemson family, whether as a student, an ROTC cadet or a Tiger football player.

“The minute that you step onto this campus and decide to be a Tiger, you’re in the Clemson family, whether you know it or not.”

Teeming with drive and perseverance, two of the many attributes that he assuredly acquired from his father, Mac Lain chose to walk on as a freshman at Clemson, not yet willing to walk away from the game that helped craft the man who he is today.

“I love football. I wanted to stay busy, and like I said, I love the sport.”

Throughout his four-year tenure with the Tiger program, Mac Lain has not taken a single moment of it for granted and has enjoyed being a member of such a talented receiving corps.

“I can say that I’ve gotten to work with and compete against some of the best athletes in the country,” said #88. “It’s been an awesome experience seeing the guys come together and pulling from one another’s work ethic. It’s been good to be around them.”

With that being said, although Mac Lain is eager to begin his assimilation into the Air Force, the brotherly connections that he has forged with his teammates will make it difficult for the senior wide receiver to leave the Tiger program behind.

However, as he prepares to take flight in life, Mac Lain will always find solace in knowing that he will forever be a cherished member of the Clemson family. One of several proverbial winds beneath Mac Lain’s wings, the brotherhood permanently uniting him with his Clemson teammates will never subside, thus making Sean Mac Lain a Tiger for life.