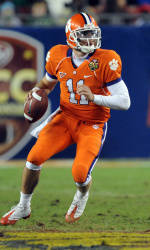 Clemson, SC – Kyle Parker, Dalton Freeman, Andre Ellington, Mallicah Goodman and Rashard Hall were all named to the first-team All-ACC freshman team chosen by Rivals.com. Clemson had the most selections with five.

Parker quarterbacked the Tigers to eight wins this year and is tied for first nationally in wins by freshman quarterbacks this year. He also established Clemson freshman records for touchdown passes, passing yards and completions.

Freeman started eight games this year and helped the Tigers to an averaged of 32 points per game. The Tigers starting center helped Clemson to a six-game winning streak that led to Clemson’s Atlantic Division championship.

Ellington was Clemson’s second leading rusher with 471 yards and four touchdowns. His 7.4 yards per carry average is second best in Clemson history and second best in the ACC this year.

Goodman did not start a game, but had 30 tackles, including five tackles for loss and two sacks. He helped the Tigers lead the ACC in sacks.

Hall ranks 13th in the nation in interceptions with six, the third most in Clemson history by a freshman. He has 59 tackles to rank sixth on the team. He had a streak of four straight games with an interception, tied for an all-time Clemson record.