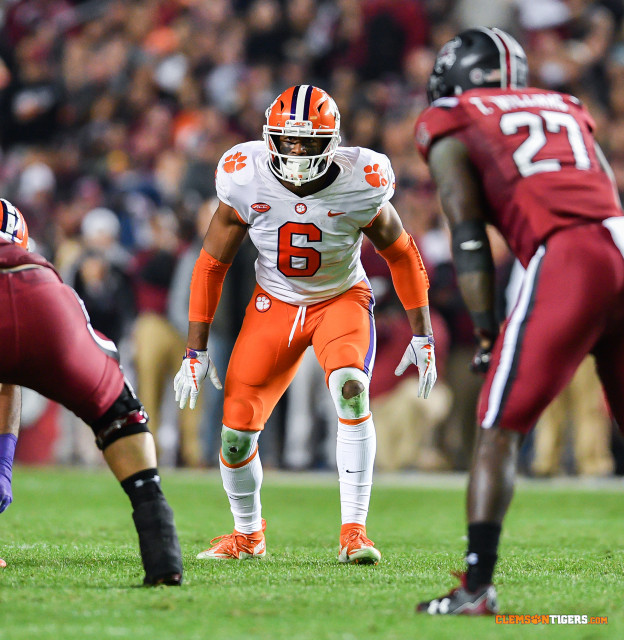 Clemson, S.C.—Five former Clemson players who helped the Tigers to a 40-4 record and three ACC Championships over the last three years, have been invited to the NFL Combine. The event will take place March 2-5 in Indianapolis, Ind.

O’Daniel was a first-team All-American in 2017, helping the Tigers to the College Football Playoff and the Sugar Bowl. The graduate had a team best 104 tackles, including 11.5 tackles for loss and five sacks. He had two interception returns for touchdowns.

Smith finished with 60 tackles, including 43 first hits. He was fifth on the team in tackles and added an interception return for 38 yards. The interception came against Florida State and changed the momentum of the game in the fourth quarter.

Cain and McCloud are classmates from the same area of Tampa, Fla. Cain, a third-team All-ACC selection, led Clemson in receiving yards this year with 734 and had 58 catches, second on the team. He had a team best six receiving scores. McCloud had 49 catches for 503 yards and added a team best 303 punt returns, the most by a Clemson player since 2004. He was a second-team All-American as punt returner.

Hearn was a third-team All-ACC selection who helped the Tigers to 33.3 points per game and 2717 yards rushing. He started 29 games in his career and played in 43.

The program has had at least one first-round draft choice each of the last five years.  DeAndre Hopkins was a first-round pick by Houston in 2013 and was named to the Pro Bowl in 2015 and 2017. Sammy Watkins was the No. 4 overall selection of the 2014 NFL draft by the Buffalo Bills.

At the 2015 draft, Vic Beasley and Stephone Anthony went in the first round. Beasley led the NFL in sacks in 2016. Shaq Lawson was a first-round selection at the 2016 draft, while Mike Williams was the No. 7 selection and Deshaun Watson the No. 12 choice of the 2017 draft. It marked the first time Clemson had two of the top 12 selections in the draft.