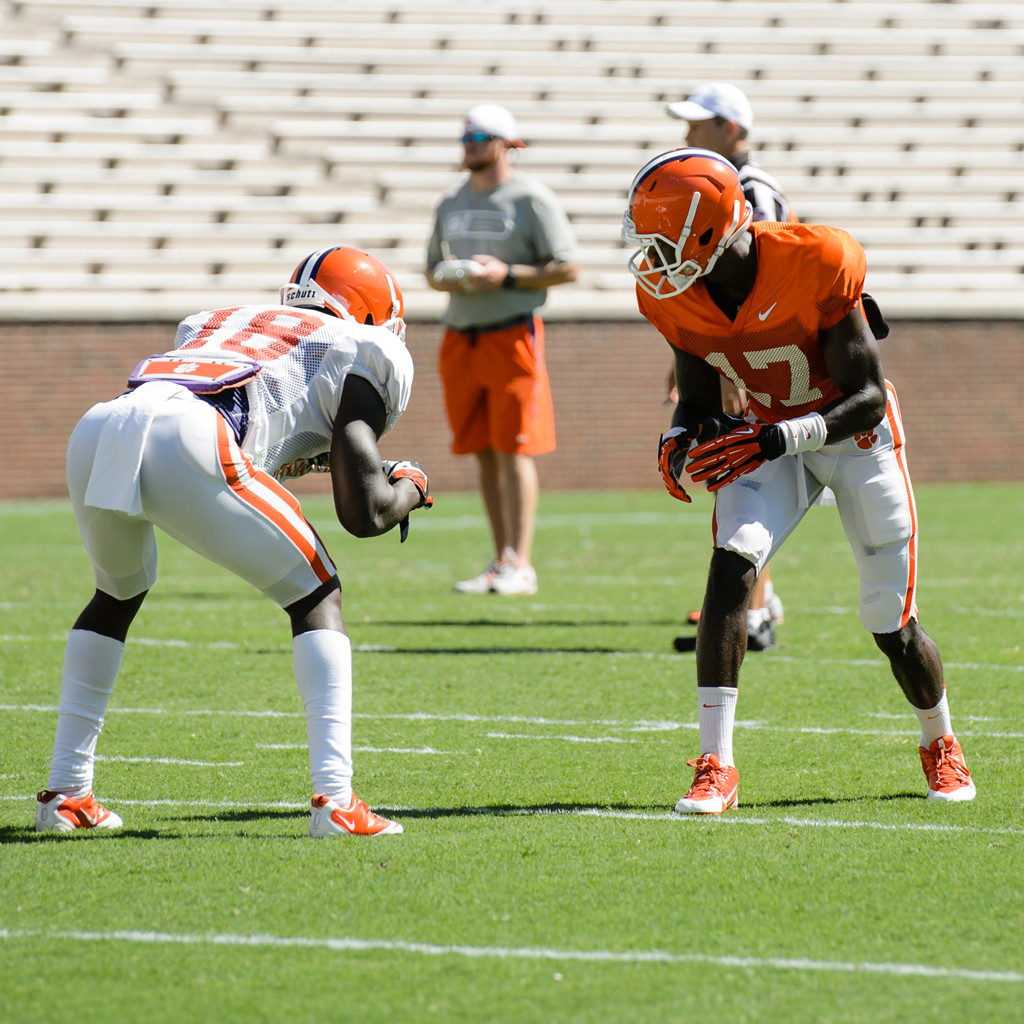 August camp is in the books. The Tigers conducted 20 practices over a 19-day period and now break Wednesday for the first day of the fall semester. When the team returns to the practice fields Thursday, all of the focus will be on the 12th-ranked Georgia Bulldogs. Gameday is just 10 days away in Athens, and Dabo Swinney’s Tigers are in search of their third straight win over an SEC team to open a season.

Swinney reiterated to reporters Tuesday afternoon that his team is in no way a finished product, but has answered some of the questions the staff had entering practice. With that in mind, we examine five important takeaways from August camp.

With offensive linemen, development is a continual process. For some, the light comes on earlier in a career than others. In the case of redshirt junior Joe Gore, the light appears to at least be burning brighter during his fourth August camp.

Gore has been lauded as “our most impressive lineman of camp” by Swinney. He’s not alone in his praise; offensive coordinator Chad Morris has reaffirmed Gore’s consistency will likely give him extended duty next week “between the hedges” in Sanford Stadium.

The biggest question mark on defense entering camp, the Tigers at least know they have several bodies capable of filling roles at the nickel, cornerback and safety positions. Some battles could even wage “week to week,” Swinney said Tuesday. One such spot is at safety, where sophomores Jayron Kearse and Jadar Johnson have both shown flashes of brilliance. Kearse is a tall, rangy playmaker, while Johnson turned heads in the most recent scrimmage with an interception return for a touchdown.

Another intriguing storyline in the secondary is T.J. Green’s move after spending his entire freshman season in 2013 as a wide receiver. Green seems to have found a home and is currently running with the second team behind veteran Robert Smith at the other safety spot.

Sam Cooper and Stanton Seckinger have both missed time this preseason, but that’s given younger players like Jordan Leggett and Jay Jay McCullough a chance to shine. Cooper has returned to practice full-go and is the most veteran player at the position, and Swinney is optimistic Seckinger isn’t far away from returning to practice. Seckinger, of course, caught what proved to be the game-winning touchdowns against Georgia and Ohio State to bookend the 2013 season.

Leggett hauled in a pair of touchdowns in a situational scrimmage and McCullough has shown progress as a pass-catching threat as well. In any case, Morris has plenty of options at his disposal when it comes to tight ends. We’ve seen how valuable the position has been in his offense, dating to All-American Dwayne Allen in 2011 and all-conference performer Brandon Ford in 2012.

Make no mistake, the return of Charone Peake is crucial to Clemson’s offense. He was coming into his own early last year before a knee injury forced him to miss the bulk of the season. It’s easy to forget he had one less catch (five total for 58 yards) than Sammy Watkins in the opening win over Georgia. Peake returned to practice Monday. He gives the Tigers another playmaker, but more importantly, another veteran presence on the field.

Peake and fellow Dorman High School product Adam Humphries are seen as the leaders of a receiving corps looking to replace NFL Draft picks Watkins and Martavis Bryant. Clemson’s talent at the position is young; the Tigers brought in four first-year freshmen, three that enrolled in January. Peake’s return solidifies the position, especially with Swinney raving about the growth he’s seen in talented sophomores Germone Hopper and Mike Williams.

No coach has praised any two players more than Brent Venables when asked about seniors Stephone Anthony and Tony Steward.

“They’ve taken the linebackers by the throat, willingly or unwillingly,” he said. “I can coach those two as hard as I need to, and they take the coaching and respond.”

Anthony’s return after an All-ACC junior season was a bonus for a defense that boasts an experienced-laden first two levels. He posted 131 tackles and snagged the game-clinching interception in the Orange Bowl win over Ohio State in January.

Steward has overcome torn ACLs in 2010 and 2011 and has earned his place as a starter heading into his senior season following the departure of the ultra-productive Spencer Shuey.