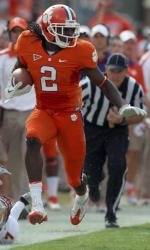 CLEMSON, SC – Dwayne Allen, Chandler Catanzaro, Sammy Watkins, Brandon Thompson and Andre Branch have all been named midseason All-Americans by various media outlets. They have all helped the Tigers to a 6-0 record and number-eight national ranking according to the AP and USA Today polls.

Allen was named a first-team midseason All-American by ESPN.com and a second-team selection by Phil Steele. Allen has 22 receptions for 340 yards and four touchdowns from his starting tight end position. He is a candidate for the John Mackey Award, which goes to the top tight end in the nation.

Chandler Catanzaro was named the first-team midseason All-America kicker by ESPN.com. Catanzaro has made 10-12 field goals so far this year, including 5-6 from 40 yards or more. He made 5-5 field goals against Boston College and was named ACC Special Teams Player of the Week and won the Leather Helmet Award as the top player in the Clemson vs. Boston College game.

Thompson and Branch were both named second-team midseason All-Americans by Phil Steele. Branch leads the Tigers in total tackles (40), tackles for loss (10) and sacks (6). He ranks seventh in the nation in sacks. Thompson has 34 tackles to rank third on the Clemson team in tackles.

Sammy Watkins was named a third-team midseason All-American by Phil Steele. He was also named the top overall freshman in the nation by Rivals.com and ESPN.com. Watkins leads Clemson in receiving this year with 38 catches for 623 yards and six touchdowns. He is second among freshmen nationally in receptions per game and receptions and is tied for first in touchdown receptions among freshmen. He is already a three-time ACC Rookie of the Week selection and a two-time national Freshman of the Week by Rivals.com.