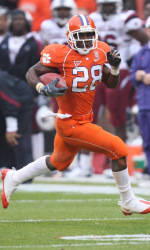 The Clemson junior was joined on the team by teammates Thomas Austin, Mark Buchholz, Jimmy Maners and Brandon Maye. With five selections, Clemson was second among league teams, trailing only Maryland, who had eight. Austin, Buchholz and Maners all made the Academic team for the second straight year.

Spiller posted a Dean’s List GPA of 3.5 in sociology for the fall semester and became the first Clemson football player since 2000 to make the Dean’s List and first-team All-ACC in the same year. Spiller was the first-team All-Purpose player on the All-ACC team this year when he led the league in all-purpose running with 1770 yards. He has now established 10 Clemson records as he enters his senior year as one of the top returning players in the nation regardless of position.

Austin made second-team All-ACC on the field and first-team in the classroom. The rising senior led Clemson in knockdown blocks this past season when he started at center and guard over the course of the season.

Maye was Clemson’s fourth leading tackler with 87 stops, including five tackles for loss. A red-shirt freshman, Maye made first-team Freshman All-American according to the Football Writers Association.

Both of Clemson’s kickers were named to the team. Mark Buchholz made 15-21 field goals last year and made the Academic All-ACC team for the second straight year. Jimmy Maners, Clemson’s fourth ranked punter in school history, also made first-team Academic All-ACC.