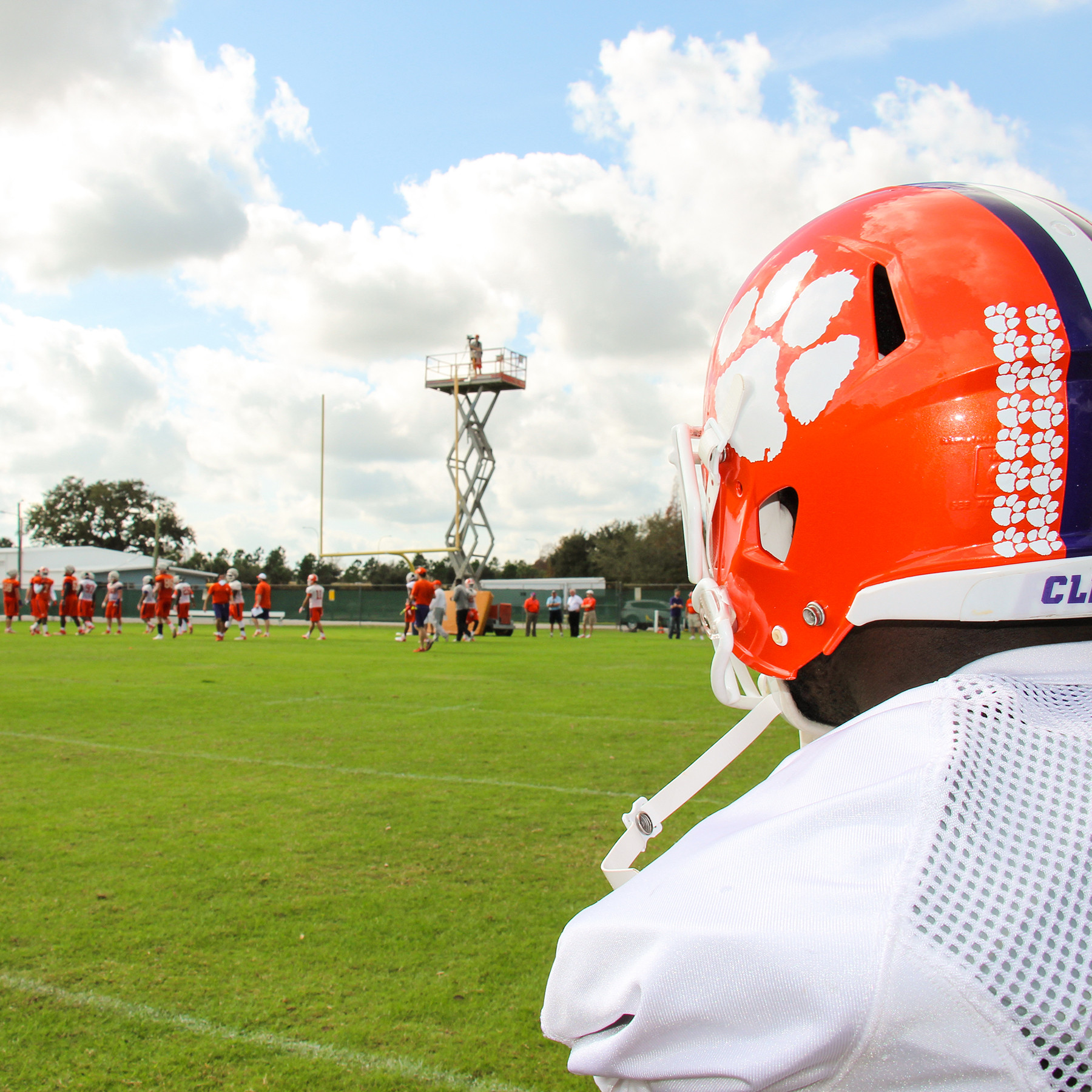 ORLANDO, FLA. – The 2014 Tiger senior class had its final practice together at Thunder Field, the facility adjacent to Orlando Citrus Bowl Stadium, on Saturday. The 28 active Clemson seniors and the rest of the Tigers are preparing for the 2014 Russell Athletic Bowl on Monday at 5:30 p.m. against No. 24 Oklahoma.

This year’s seniors already have a record 41 wins on their resumé, including eight over top-25 teams. A win over the Sooners would give the Tiger seniors a record-tying nine top-25 victories.

Swinney was asked after practice by the media to compare Oklahoma to an ACC team he faced this year.

“Oklahoma is probably most like Florida State,” said Swinney. “They have a very experienced offensive line, and they like to run the ball. Florida State is much like that in their approach. They also have some great receivers. I look at Sterling Shepard (Oklahoma’s top wideout) and I think of Rashad Greene at Florida State.

“Oklahoma was the No. 1 team in the nation back in August because they had a lot of players returning from a team that beat Alabama in the Sugar Bowl. They had some injuries and had some tough breaks in some close games, but they will be at full strength for this game. They get their quarterback (Trevor Knight) back along with Shepard.

“Oklahoma has a great running back in Samaje Perine, who set the world record for rushing yards in a game. He is a tough back who is difficult to tackle. He is a load, a great player, but they will play three outstanding backs who can do a lot of damage. We are going to have to tackle very well.”

Swinney was also asked about coaching his first game in four years without Chad Morris as offensive coordinator.

“We have always had a collaborative effort when it comes to calling the plays. I am confident in Tony (Elliott) and Jeff (Scott). The positive of Chad leaving when he did is that we have had the bowl season this year to get us prepared for next year. We will be a lot further ahead when we start spring practice. And we already have Brandon Streeter involved as the quarterbacks coach.”

Swinney said after practice that he did not expect tight end Jordan Leggett to play. Leggett suffered a knee injury during bowl practice at Clemson.

“Thank goodness we moved Roderick Byers from the defensive line to tight end during the middle of the season. We will need him on Monday.”

Graduate and co-captain Sam Cooper, who began the year with a broken leg suffered in warmups for the season-opener at Georgia, will start at tight end against Oklahoma.

• The marquee matchup of the Russell Athletic Bowl on paper looks to be Clemson’s defense against Oklahoma’s offense. That is particularly the case in terms of rushing. Oklahoma averages 268.6 yards per game on the ground, eighth-most in the nation. Clemson allows just 97.7 yards per game on the ground, seventh-best in the nation. In terms of scoring, Oklahoma averages 38.9 points per game, 10th in the nation, while Clemson allows just 17.6 points per game, seventh-best in the country.

• The Clemson vs. Oklahoma matchup will feature two head coaches who have been with their respective programs as head coach for 7+ seasons. Swinney has been in charge of the Clemson program since October 2008, and Bob Stoops has been head coach at Oklahoma since 1999.

• One of the visitors at practice Saturday was former Clemson quarterback Will Proctor. The Orlando area native was Clemson’s starting quarterback for the 2006 season as a senior, his only year as the starter. The Tigers averaged a school-record 6.5 yards per play that season.