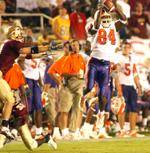 Florida State capitalized on Clemson special teams miscues to grab a 48-31 victory Thursday night before 78,000 fans at Doak Campbell Stadium. Quarterback Willie Simmons had a career high in passing yards, but it was not enough for the Tigers.

With Clemson trailing only 28-24 at halftime, Florida State opened the scoring in the third quarter. It drove 45 yards in 6 plays, capped by a Jones touchdown run to extend the margin to 35-24 with 8:57 remaining. Later in the quarter, Clemson responded with a 51-yard, two-play touchdown drive. Quarterback Willie Simmons went deep to Derrick Hamilton, who wrestled the ball away from a Seminole defender and came away with a 42-yard catch. Yusef Kelly then took an option pitch from Simmons and sprinted into the endzone from nine yards out.

Florida State added another 22-yard field goal by Xavier Beitia early in the fourth quarter to give FSU a 41-31 lead. Disaster then struck for the Tigers, once again on special teams. Jackie Robinson fumbled on the kickoff and Florida State recovered. Jones then ran through the Clemson defense for a touchdown, giving the Seminoles an insurmountable 48-31 lead.

After the defense held, Clemson suffered another special teams mishap when a punt hit T.J. Pugh, was scooped up by Hamilton, but then jarred loose by Leon Washington. The Seminoles recovered and converted the turnover into a 22-yard Xavier Beitia field goal for a 38-31 lead with 1:20 left in the quarter.

Clemson recovered from an early miscue to score 14 straight points and lead Florida State 14-7 at the end of the first quarter. The Tigers found trouble early after going three-and-out on the game’s first possession. Punter Wynn Kopp fumbled a long snap and was subsequently tackled by the Seminoles. Three plays later, Florida State quarterback Chris Rix leaped over the goaline to give FSU a 7-0 lead.

Clemson scored later in the quarter after a 46-yard return by Willie Simmons found Airese Currie streaking down the field for a 28-yard touchdown play.

Yusef Kelly punched it in two plays later with a 2-yard touchdown run that gave the Tigers a 14-7 lead.

Florida State responded with a 50-yard kickoff return by Talman Gardner. The Seminoles drove into Tiger territory. Florida State faced 3rd-and 3 at the Clemson 20-yard line at the end of the period. On the first play of the second quarter, Greg Jones capped the drive with a 20-yard touchdown run to knot the score at 14.

A Clemson drive deep into Seminole territory was thwarted when a pass from Simmons bounced off of Kevin Youngblood’s hands and was picked off by Stanford Samuels. The Tigers took the ball onto FSU’s side of the field on its next drive but suffered an injury to offensive lineman Nick Black. But on the next play, Simmons pitched the ball to walk-on wide receiver Aaron Hunt kicked a field goal to give Clemson a 17-14 advantage.

On the ensuing kickoff, Leon Washington ran 97 yards for a touchdown to put Florida State back on top 21-17. Hamilton then took Florida State’s kickoff back 40 yards to the Clemson 46. After an unsportsmanlike penalty backed the Tigers up they were forced to punt the ball away. The Clemson defense held, giving the offense one last shot before halftime. Simmons went deep and lofted a pass to McKelvey, who went up over two defenders, came down with the ball and stumbled to the 9-yard line. The 59-yard pass was the longest pass play for the Tigers this year.

On the next play, Simmons rolled left, scrambled, and then found Hamilton for a 9-yard touchdown. The Clemson defense suffered a let down with 21 seconds left and allowed Jones to rush for 64 yards to the 5 yard-line. Rix then completed a 5-yard TD pass to Gardner to give the Noles a 28-24 lead heading into the locker room.