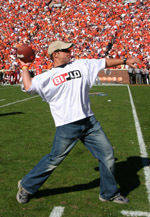 Chris Bostic was a $10-an-hour landscaper whose favorite football memories were running for touchdowns in Pee Wee games. After his perfect 25-yard spiral pass made it though the tiny hole in a promotional contest, the Army veteran has an even better memory – as South Carolina’s newest millionaire.

Bostic’s pass at the end of the first quarter of the Florida State-Clemson game Saturday earned him $1 million in the Bi-Lo Healthy Choice Pigskin Challenge.

The Clemson fan said he thought the pass had a chance when it left his hand, 25 yards away from the 20-inch hole. The back end of the football clipped the bottom of the hole and bounced through as the crowd at Memorial Stadium went wild.

Bostic jumped up and hugged some of the contest sponsors, then raised the oversized million-dollar check over his head as he ran to the sideline.

He served for a year in Afghanistan with the 25th Infantry, coming home in March. He got out of the Army in the summer and has been working as a landscaper.

Bostic said he will show up for work Monday, just because everyone has said he won’t.

Minutes after he won, his cell phone started ringing, with family, friends and old Army buddies calling to congratulate him. Bostic plans to use the money to take his 8-year-old daughter on a shopping spree.

“It’s going to be an early Christmas,” Bostic said.