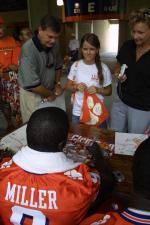 Fan Appreciation To Be Held This Sunday

Clemson will hold its annual Fan Appreciation Day at Death Valley this Sunday from 3:00 PM to 5:00 PM at Death Valley. All Clemson players and coaches will be available for autographs and to pose for photos under the North and South Stands at Death Valley.

Fans are asked to enter at Gates 9 and 13 at the stadium. No one will be admitted into the stadium prior to 3:00 PM. Defensive players will be available under the North Stands and offensive players will be stationed underneath the South Stands. The first 1000 youngsters 8th grade and under will be given a Clemson t-shirt. Clemson football posters and Coca Cola will be available free of charge.

Game tickets and the 2004 Clemson Media Guide also may be purchased on Sunday at the stadium along with tickets to Tigerama on October 15.