Dabo Swinney’s leadership is admired and can be shown by the desire to play for him by young men across the nation. Safety Elijah Turner was lured by the influence Swinney has as Clemson’ head coach and wanted to experience it.

“I knew Coach Swinney ran this program the right way, and I wanted to come and play under him to put myself in a better position later in life.”

Turner grew up within miles of Clemson in Pickens and graduated from Seneca High School. However, because Presbyterian College was his only Division I offer, he chose to play at his father’s alma mater.

At the end of Turner’s sophomore season, the football program was no longer offering scholarships to new players and was in the middle of changing conferences, prohibiting the team from competing for a championship.

For this reason, and the fact that his career plan is to coach at the college level, Turner decided to transfer to Clemson in order to absorb Swinney’s leadership qualities.

Turner’s father has been a high school football coach since before he was born, so football is in his genes. He was surrounded by the environment around his father’s team at a young age before he started playing.

Observing his father over the years combined with his strong faith sparked his passion to become a coach.

“I have seen my dad and how much of an influence he has had on so many lives because of his profession. I believe as a Christian, my duty is to reach as many souls for Christ as I can, and the best position I can be in is coaching, which falls in line with my personal passion of football.” 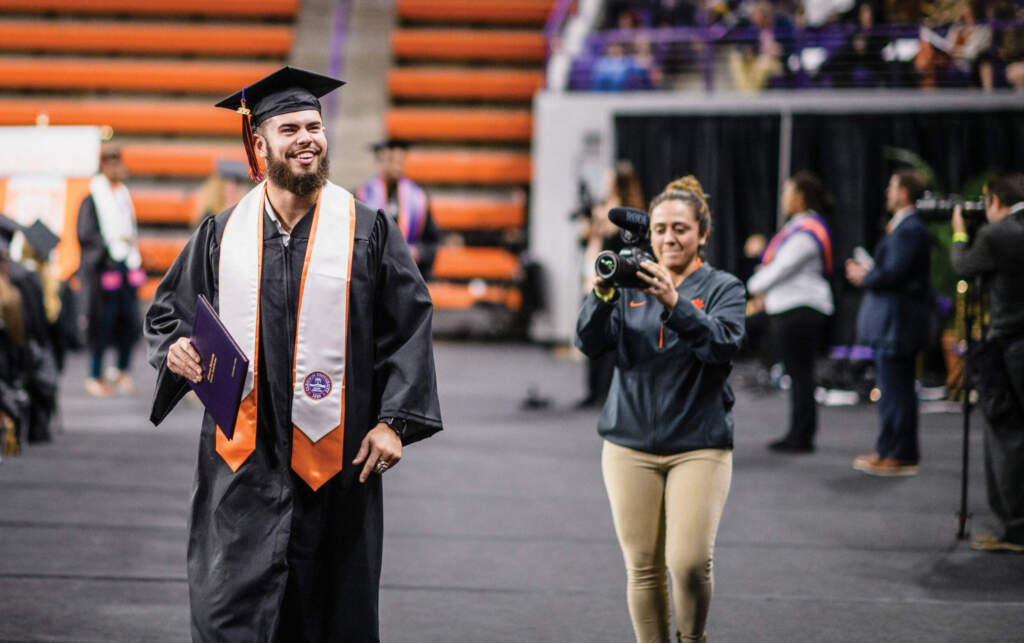 During his first semester at Clemson, he lived in his hometown away from campus, because the transfer happened so fast.

“It was different. After early mornings and late nights following workouts, I would still drive 30 minutes home, but it gave me time to spend with my family.

In the fall of 2018, he was able to move in with two teammates, Peter Cote and Cole Renfrow. Turner formed strong relationships with both and other teammates by being around them in the football facility.

The moment after the victory in the 2018 national championship game is a flashback Turner wants to revisit with his teammates in 2020.

“The love and closeness we all felt after reaching such a high goal and all the hard work every single person put in was memorable. It was an amazing feeling, and the fact that I got to feel it with 119 other guys was pretty special.”

Over the past three years while playing under Swinney, Turner has learned what it means to play and win with integrity.

“I have seen what it looks like to truly put your players’ best interest in front of everything else. He has shown us winning is nothing without doing it the right way.”

Turner graduated in December with a degree in communication and is currently pursing a master’s degree in athletic leadership. He is also a two-time ACC Academic Honor Roll selection.

“I want to coach at the highest level of college football, but it’s more wherever God leads me. I also believe that wherever he leads me, he will give me the opportunity to make the team the best it can be.”