Eyes on the Prize

“No matter what happens to you, good or bad, you can learn and grow from it.”

That quote from James Skalski perfectly embodies his winning attitude, which has molded the graduate into one of the ACC’s top linebackers and the undisputed leader of the Clemson defense.

Skalski has dealt with his fair share of adversity during the course of his Tiger career, both on and off the football field, but he has never allowed it to hold him back. Instead, he has grown stronger from the character-building moments and used them as opportunities to better himself.

In 2016, Skalski, then a first-year freshman, lost his father, John, and received the heartbreaking news of his passing while sitting in Head Coach Dabo Swinney’s office. John played at Oklahoma and went on to coach youth football, passing his love and passion for the sport down to his son.

The devastating loss was gut-wrenching and difficult for Skalski to move on from, but the playing career he has put together since is proof of his ability to compartmentalize and overcome the obstacles he encounters in life and in football.

“Going through adverse situations in my personal life and on the field has made me stronger. That’s a testament to Coach Swinney and the rest of the coaches for how they teach and inspire.”

Skalski has consistently bounced back from each and every setback throughout his tenure as a Tiger, whether it be a preseason injury in 2018 that limited him to four games and resulted in a redshirt, or an unfortunate targeting ejection from last season’s national championship game.

A passionate player who wears his emotions on his sleeves and “walks the walk” while also “talking the talk,” Skalski has always harnessed the power of adversity to better himself, and he would not change a single aspect of his Tiger career up to this point.

“My Clemson career has been everything I dreamed it would be and more. Everything about it has been amazing, and it’s helped me grow, year after year.”

It comes as no surprise that Skalski shares a close bond with Associate Head Coach Brent Venables, who serves as Clemson’s defensive coordinator and linebackers coach. Much like Venables, Skalski is excitable and intense, and the animated Tigers are commonly captured on broadcasts experiencing a wide range of emotions on the sideline.

Venables recruited Skalski when he was a star athlete at Northgate High School near his hometown of Sharpsburg, Ga. Skalski credits the man he typically refers to as “Coach V” with magnifying his intensity and work ethic through his contagious energy and impeccable drive and determination.

As for Swinney, Skalski considers him the most inspirational person he has ever known and believes the culture he has instilled within the program to be as good as it gets.

“I love the Clemson family, the culture we have, the locker room … I can’t get enough of it,” said Skalski. “Being with everyone is one of the reasons I came back, and I also came back to try to reach the top of the mountain again.” 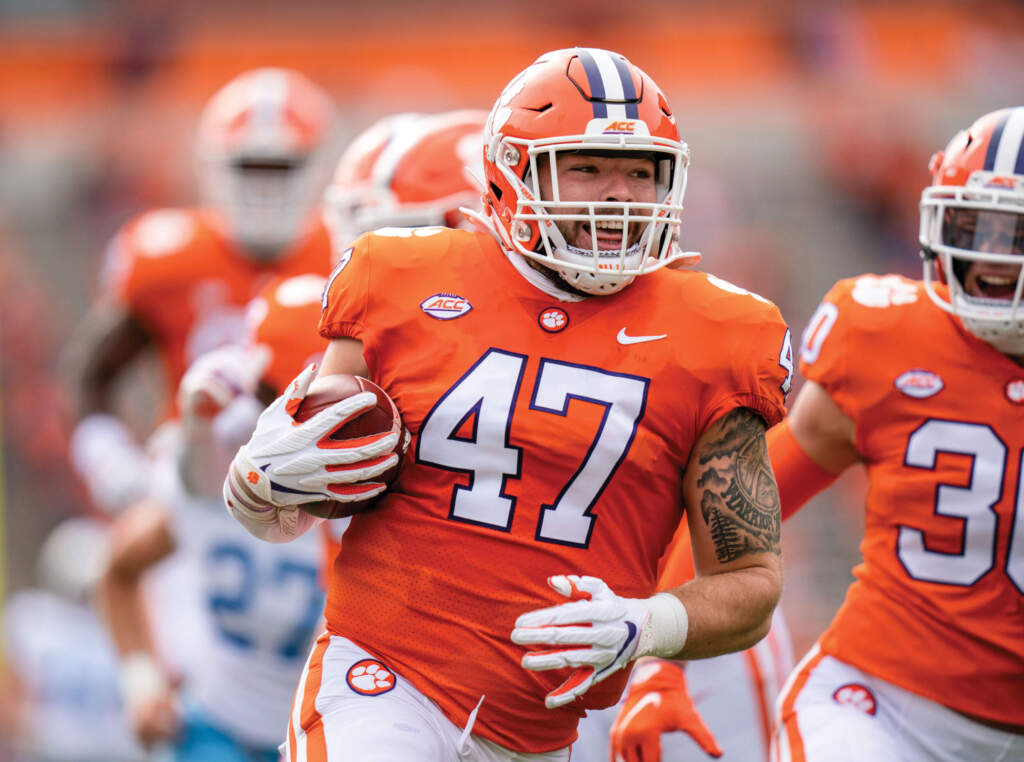 Inspired to win his third national title as a Tiger, Skalski is fueled by the undesirable ending to the 2019 season and the unique circumstances surrounding the 2020 slate. The starting middle linebacker recognizes the sacrifices made by so many in order to make this season possible, and his appreciation of having the chance to suit up for Clemson has grown because of it.

“It felt different this year because there’s a level of appreciation,” Skalski said when reflecting on Clemson’s home opener in September. “There were so many uncertainties, and when gameday arrived, and I knew I was running down the Hill, it was great.”

Good things seem to come to those who persevere and give it their all, and Skalski was rewarded with football’s version of a gift when a loose ball was his for the taking in the first home game of 2020. Electrifying the fans inside Memorial Stadium with his first career touchdown, Skalski recovered a fumble forced by Myles Murphy against The Citadel and returned it 17 yards to the end zone.

“I had envisioned making a play like that,” he said with a laugh. “I took a quick glance, and I knew I would score as soon as I had the ball in my hands. It felt amazing. A scoop-and-score … scoring as a defender is the best feeling.”

Skalski’s career in Tigertown has seen him progress from primarily playing on special teams as a freshman in 2016 to finishing second on the team with 105 tackles in the 2019 season. Quite the athlete, Skalski was a standout placekicker and punter for his high school team, in addition to being recognized as an all-state linebacker, and he was also an outstanding soccer player.

Fast forward to 2020, and No. 47 is the field general of Clemson’s talented defense. With that being said, Skalski fully embraces all that comes with the leadership role.

“I’m taking it one game at a time. But I want to win the national championship again, and I want to be a spearhead of the defense for it. Knowing I’m one of the leaders in the room, that’s one way I really want to win it.”

While Skalski, who received his degree in communication last year, has garnered multiple All-ACC Academic selections and is poised to excel in any career path he chooses, his football journey is nowhere close to the end. The linebacker has NFL aspirations and may even take advantage of the 2020 redshirt rule change by returning for a sixth season in 2021.

Those decisions loom, but, for now, Skalski has his eyes fixed solely on the prize. And that prize is a third national title. If this season does prove to be his last in a Tiger uniform, Skalski wants to go out on top, and although he has already taken part in his fair share of winning as a Tiger, the field general is hungry for more.