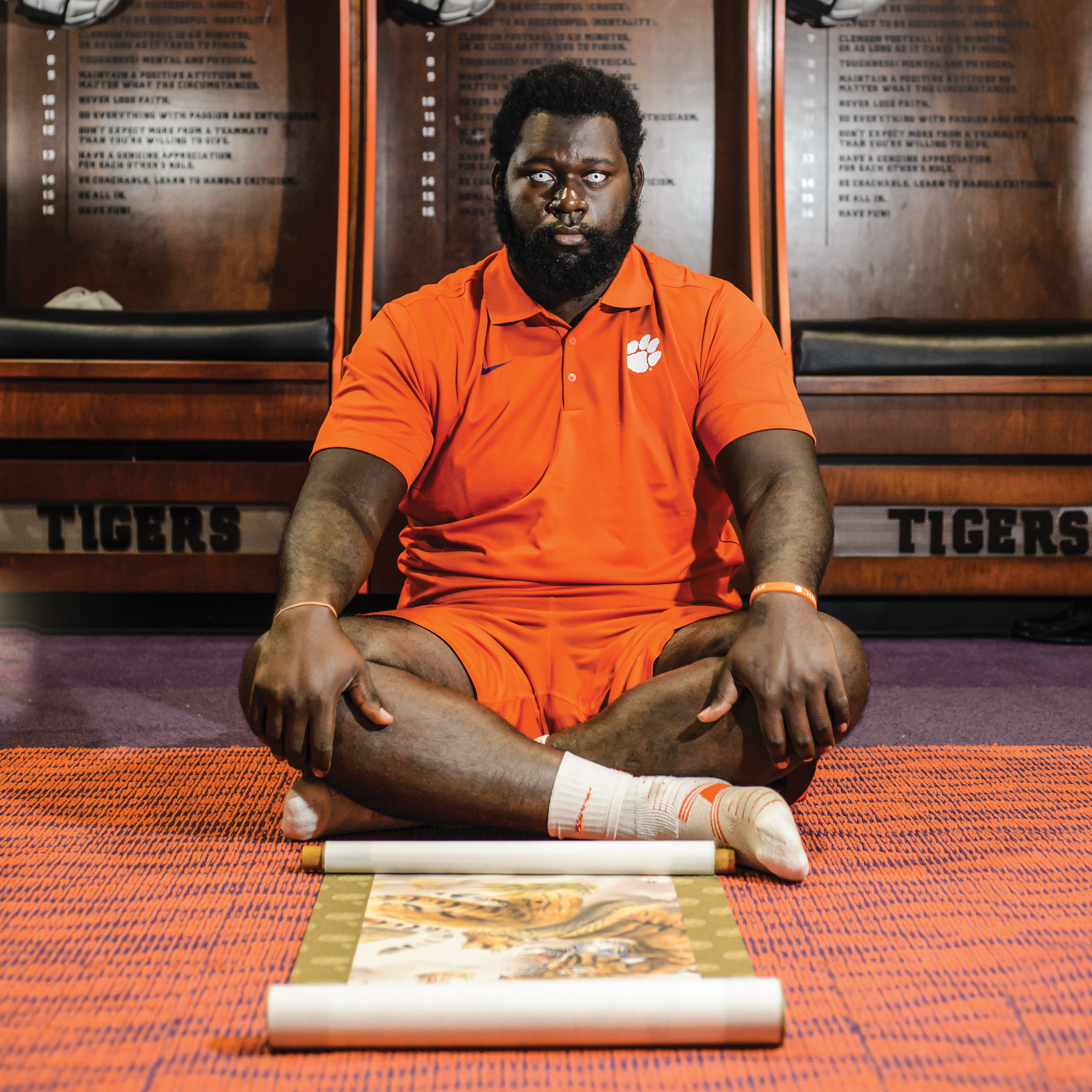 Eyes of a Tiger

In college football, few men better match these qualities in appearance than Clemson offensive lineman Kalon Davis. Standing 6’5” and weighing in at a whopping 340 pounds, his sheer size and power are enough to make defensive linemen crumble. Not only does the physicality of Davis strike fear in the hearts of opponents, so do his eyes.

“The most awful thing I’ve ever seen in my life,” remarked Head Coach Dabo Swinney when Davis debuted his terrifying, all-white “blizzard” contacts in the offseason. Admittedly, it’s hard to look away from the unnatural, zombie-like gaze of Davis anywhere on the gridiron.

However, if eyes are truly the windows to the soul, be brave and look deeper to find a man filled with amazing talents on and off the football field.

“I’ve always been a guy with a lot of different interests and passions,” said Davis. “Ironically, playing football was one that came later in my life. I didn’t start playing the game until my senior year of high school. I was a soccer guy all the way. Football wound up being the better route for me, but I still love soccer.

And over the past four seasons in Tigertown, Davis has gained an edge as a redshirt senior and pivotal leader on the offensive line. Paving the way for some of the most electrifying skill position players in school history, Davis has quietly taken on his role with hard work, pride and a determination to leave a personal stamp on the Clemson football program.

“When I first got to Clemson, I was the lazy kid on the block,” laughed Davis. “I wasn’t focused and I didn’t push myself. I suffered an injury my freshman year, and after I redshirted, it only made me more lax.

“Looking back, I realize how much I’ve grown up and made the strides necessary to do well in the classroom and be a leader on the field.

“I don’t take my role as a senior lightly. My name doesn’t get called over the loudspeakers on Saturdays, but I love having the chance to be among the unsung heroes. It’s up to us to be the difference makers. It’s a challenge I enjoy.”

But Davis doesn’t just enjoy challenges on the field. On the academic side of his Clemson experience, Davis is majoring in modern languages with a concentration in Japanese. In fact, Davis spent part of this summer immersing himself in Japanese culture while studying in Japan before fall camp began. Fluent in the ancient language, Davis’ bilingual talents are something his teammates get a kick out of.

“I’ll whip out some Japanese just to mess with people and keep them on their toes,” said Davis with a grin. “All of my teammates know I can speak Japanese and it cracks them up. Most of our opponents think I’m either speaking gibberish or am just crazy. I never say anything important, but it provides another edge I like using on the field.”

Although it has yet to be determined if Japanese trash-talking has contributed to Davis’ blocking success, the offensive lineman behemoth has routinely graded out as one of Clemson’s best this season. Throughout his time as a Tiger, Davis has 30 knockdowns in 985 snaps over 40 games (12 starts) in his career.

Like the other senior leaders on this year’s squad, Davis has victory rings for the 2011 ACC Championship, 2012 Chick-fil-A Bowl and 2014 Orange Bowl. Having tasted success at the top, Davis is determined to help lead the Tigers back to success in his final season.

“I’ve been blessed to have been a part of the some championship teams,” stated Davis. “It’s been special to see what this program has achieved since I’ve been here, and it’s going to be awesome seeing what will happen here after I’ve left. I have to do my job of leading the way, imparting what I’ve learned to the young guys, to make us the best we can be.”

Although Davis will soon walk across the Littlejohn Coliseum stage to receive his diploma and leave these Blue Ridge foothills, he plans on entering the NFL draft and giving the professional ranks his best shot.

“For every senior, we want to chase the dream and play the game as long as we can,” added Davis. “I love to play football. If I didn’t love playing, I’d walk away today. But I’ve worked so hard and the NFL is what I’m aiming for.

“I’ve set my goals high and I’m confident I can make it. There’s not many jobs that let you have a full beard and white eyes in the workplace. I have to ride this persona as long as I can.”