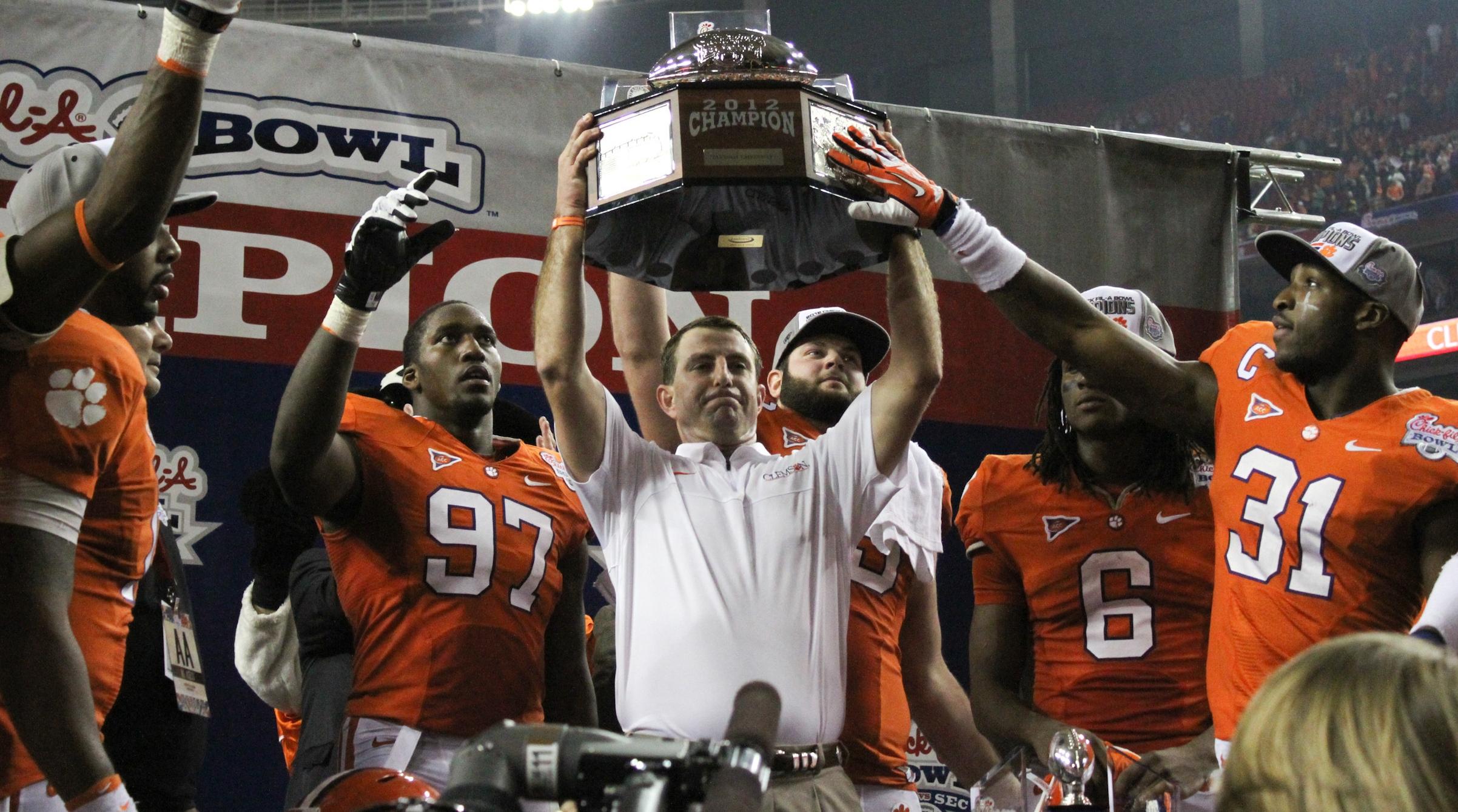 CLEMSON, SC – When the clock struck midnight and the calendar turned to 2013, the Clemson football team was still in its locker room in the Georgia Dome celebrating its comeback win over No. 7 LSU in the Chick-fil-A Bowl.

Just nine days later, the Tigers officially turned their calendars to the 2013 season as well.

“We had a team meeting yesterday, and we just kind of turned the page,” head coach Dabo Swinney said Friday during his season wrap-up news conference. “We enjoyed this last game for a few days, but now it’s all about 2013. It’s a new football team.

“And that first meeting is always interesting because you get so used to being with a group of guys and seeing this guy sit here and this guy sit here, and now all of a sudden those guys are gone – and it’s a new group of seniors and juniors and sophomores. It’s a new football team.”

And the new team will have its work cut out in outperforming the previous one.

The Tigers (11-2) finished ranked 11th by the Associated Press and ninth in the final USA Today poll – their first top-10 finish in either poll since the 1990 campaign – and their 25-24 win over LSU marked the highest-ranked team they had defeated in a bowl since the 2003 team beat sixth-ranked Tennessee in the Chick-fil-A Bowl.

“We’re going to try to continue to close the gap on being the best out there,” said Swinney, whose team won or tied for first place in the ACC Atlantic for the third time in his four years as head coach. “Because that’s our goal. We don’t want to be one of the best. We want to be the best. And I think we’re heading in that direction.”

Undoubtedly helping in that regard is the return of quarterback Tajh Boyd, the 2012 ACC Player of the Year, for his senior season. The first first-team All-American at his position in school history, Boyd announced he would return Wednesday at a news conference during which he admitted he was strongly leaning toward leaving in the aftermath of the bowl game.

One player who won’t be part of that football team is record-setting wide receiver DeAndre Hopkins, whom the school announced had opted to forego his senior season and turn pro in a news release Thursday evening.

Swinney said Hopkins was projected to be drafted “as high as the second round,” but the coach admitted he felt he “needed” another year at Clemson to prepare him for the NFL.

“I felt another year would be beneficial to him from an overall growth standpoint,” Swinney said. “But that’s my opinion. I just think that you’re always better off more times than not with another year of college and maturing, unless you are going to be a first rounder. … I know this: He’s going to be a great pro, whoever gets him.”

But while Hopkins will join the team’s 13-member senior class, as well as reserve quarterback Morgan Roberts – who has opted to transfer to Yale – in departing the program, three new Tigers have already arrived on campus.

Swinney said defensive end Ebenezer Ogundeko, defensive back Jadar Johnson and tight end Jordan Leggett had already enrolled in classes as the first official members of Clemson’s 2013 signing class, and they were formally introduced to their new teammates at Thursday’s team meeting.

“Those are three quality players that we are really excited about,” Swinney said. “Getting Jordan and getting him here midyear was huge. We’ve got a huge need at safety, so Jadar being here midyear (was huge). And then Ebo was like winning the lottery. This guy has got great upside, and the fact that he’s a midyear guy and very bright young man, I think he’s going to be a really special addition for our football team.”

Another new addition to the Clemson program is Mike Reed, who was hired from division rival NC State to replace Charlie Harbison as defensive backs coach.

Swinney said Reed was one of the first names that came to his mind when he found out Harbison – who departed for Auburn prior to the bowl game – was leaving.

“Mike’s a great fit for us,” Swinney said. “He knows our players, and a lot of our players are familiar with him because he was involved in their recruiting process as well. I’ve had an up-close interview with him for six years because I’ve studied him closely, and he’s done an outstanding job with the secondary at NC State.”

In other news Friday, the ACC announced Clemson’s 2013 conference opponents. The Tigers will host games against Florida State, Georgia Tech, Boston College and Wake Forest, and travel to Virginia, N.C. State, Maryland and Syracuse. The league will release the dates of those games in February when the schedule is completed.

Due to realignment, Clemson will host Georgia Tech for the second straight year, but loses the back end of a home-and-home with Duke and adds Syracuse as a division opponent, while Pittsburgh joins the league on the Coastal side.

“It doesn’t get any easier, that’s for sure,” Swinney said. “Instead of going to Atlanta, we’re going to Syracuse. We’ve never been there, and I know the Carrier Dome has always been a tough place to go play. So, that will be a new experience for us.”

As the Tigers turn their attention to the 2013 season, Swinney indicated he believes that team has the opportunity to be the best one he’s coached at Clemson.

“Four years ago, we’ve been kind of looking ahead (to this team) … and I think we’ve got a good football team,” he said. “I think we’re going to be as good in the trenches as we’ve been in a long time. It’s probably going to be the first time up front that we have the correct combination of talent, depth and experience. To me, that’s the most exciting thing.”

“But I also think our guys understand that the margin for error is small when you’re trying to be elite,” he added.