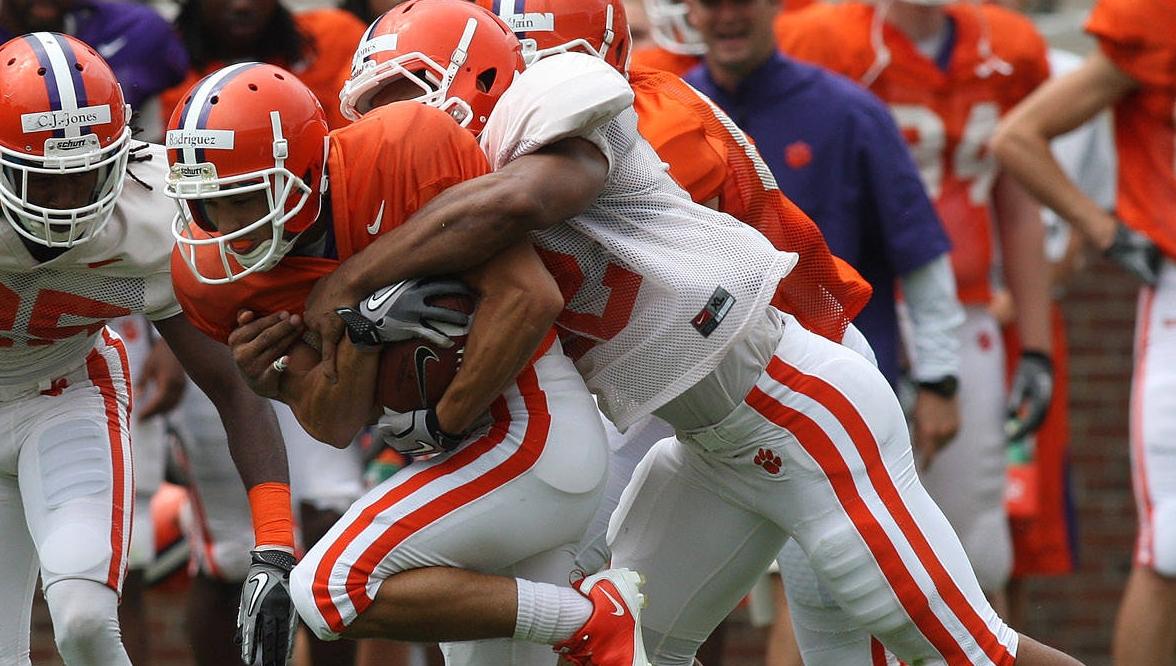 The comment would have been easy to dismiss had the passerby not been Adams himself.

Jones has yet to play a down for the Tigers, so comparisons to Adams, a consensus first-team All-American linebacker in 2000 who ranks third in school history in tackles for loss and tied for fourth in sacks, are at least premature.

But the redshirt sophomore earned a reputation for disrupting Chad Morris‘ offense with the scout team as he sat out last season after transferring from Oklahoma, and this spring has worked himself into the mix at WILL linebacker behind the team’s top returning tackler, senior Spencer Shuey.

“Having to sit out that year, I definitely wanted to be noticed at least,” Jones said. “If you’re playing defense, you’ve got to have an edge. I tried to stay positive and tried to wreak some havoc on the offensive side of the ball, get them a little frustrated.”

Jones has continued to get himself noticed this spring. He recorded five tackles and a sack during Clemson’s first stadium scrimmage Wednesday, after which Head Coach Dabo Swinney said he “plays like somebody just stole his last hundred-dollar bill.”

“He’s a good football player,” Swinney said. “He’s explosive, he plays with a violent edge to him, he’s got very good instincts for the ball, and I’m excited about him.”

Told of Swinney’s comments on Friday, Jones said he took it as a “big compliment.”

“That’s a joy to my ears as far as hearing it from Coach Swinney, the head man,” he said. “I’m just trying to improve every day and just get better at my position.”

His position is the WILL, though he has also been cross training at the MIKE, where he spent most of his time last season, as well as his freshman season at Oklahoma under current Tiger defensive coordinator Brent Venables.

During his lone season (2011) at Oklahoma, Jones played in 12 games and had 10 tackles as a backup linebacker and special teams contributor. The Houston native admits Venables’ move to Clemson was one of the reasons he chose to join the Tigers after opting to leave the Sooners.

“Definitely, having one year under my belt with him and knowing that he has the best intentions for me and thinks highly of me, it made me feel more comfortable with Coach Venables,” he said.

Venables was typically guarded with his praise for Jones after Friday’s practice, but did say he believes the 6-foot-1, 215-pounder could “definitely” help the team this season.

“He’s a guy that’s anxious to play, and he’s willing to work,” Venables said. “He’s still a work in progress, but got a good attitude and got some good ability as far as his instincts and his ability to find the ball.”

Jones played defensive end for most of his formative years as a football player, but moved to linebacker during high school at the urging of his father, who played the position at Morehouse College in Atlanta during his gridiron days.

“He always said my future was at linebacker, but I didn’t believe him until I actually moved there,” Jones said. “Turns out he was right.”

But Jones spent significant time at his former position of defensive end last season on the scout team, where Morris would ask him to play the part of big-time pass rushers such as South Carolina’s Jadeveon Clowney and Auburn’s Corey Lemonier.

This spring, Jones was asked to make another position move, from MIKE to WILL, which he admits has been quite an adjustment.

“It was a big turn for me as far as moving to the WILL,” Jones said. “I haven’t played there before, so I just have to be more open-minded because sometimes I can get very frustrated and totally screw myself up mentally. So I’ve just got to stay focused. With Coach V here now, I just feel much better under his system.”

And if he comes anywhere close to being “the next Keith Adams,” Clemson will feel much better having Jones here too.