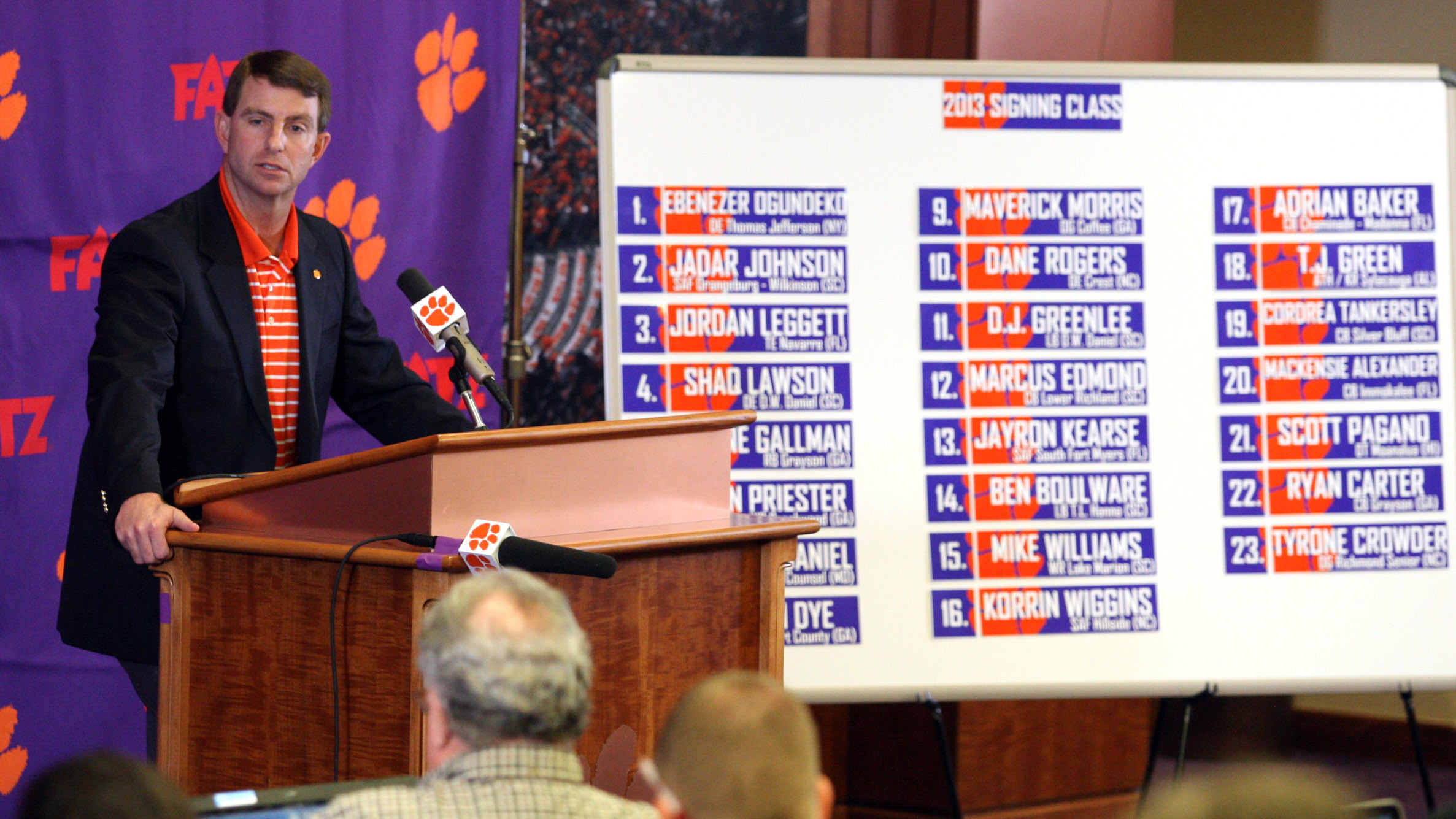 CLEMSON, SC – Dabo Swinney and his Clemson coaching staff identified the defensive backfield as their top priority early in this recruiting cycle, and going into National Signing Day, felt they had already addressed that need quite nicely.

After Wednesday, there was no longer even a shadow of doubt.

The Tigers nabbed their third straight top-15 recruiting class according to ESPN by signing 23 players, including eight slotted to play in the secondary, four of whom were not publically committed to Clemson going into signing day.

“It was huge,” Swinney said at a news conference after the National Letters of Intent had all come across the fax machine. “If there was one huge need on our team, it was definitely in the secondary, if you had to just pick one. And I think we more than addressed that.”

The biggest signing day splash for the Tigers was made by ballyhooed cover corner Mackensie Alexander of Immokalee, Fla., who donned a Clemson hat in lieu of those bearing the logos of a slew of SEC schools during a news conference at his school Wednesday morning.

Regarded as the No. 4 overall player in the nation by ESPN, the highest ranking by a Clemson signee since Da’Quan Bowers was ranked first in the class of 2008, Alexander immediately became the headliner of the class.

“He’s a rare combination at that position with his size and speed and ball skills and ability to finish plays,” Swinney said. “This is a guy that knows how to work, and he is completely driven and focused on being the best that he can be.”

Beyond Alexander, Clemson also garnered the signatures of defensive backs Adrian Baker, Korrin Wiggins and Ryan Carter, all previously uncommitted to the Tigers prior to Wednesday, along with public verbal commitments Jayron Kearse, Cordrea Tankersley, Jadar Johnson and Marcus Edmond to fill out their defensive backfield.

“We feel that we’ve got a very solid team coming back … but defensive backs were definitely the No. 1 need,” recruiting coordinator Jeff Scott said. “It was evident before the season and throughout the year that, for us to be able to have a strong run like we’re planning on doing, we needed to get some help in the secondary.”

All told, Clemson signed seven players on offense and 15 on defense, along with one athlete, T.J. Green, who Swinney said could line up on either side of the ball.

Along with one five-star prospect, Alexander, the Tigers signed 15 four-star players according to ESPN. Ten members of the class are ranked among its top 300 players nationally, and six are among the top 150.

Four members of the class are regarded among the top 10 players at their respective positions nationally by ESPN: Alexander, Ben Boulware, Dorian O’Daniel and Tyrone Crowder Jr.

Also in the linebacking corps, O’Daniel from Olney, Md., is ranked the No. 8 outside linebacker nationally and played in the U.S. Army All-America game in San Antonio in January.

“Dorian is one of the top players in the country,” Swinney said, “and Ben Boulware is as good a prospect as you’re going to sign in any recruiting class.”

The final piece to the signing day puzzle was Crowder, who picked the Tigers over Georgia live on ESPNU just after 4 p.m., and is ranked the No. 5 offensive guard in the country.

“He’s very strong – he’s set a lot of weight-lifting records in the state of North Carolina – and is a very physical young man,” Scott said. “At the Shrine Bowl, I had several high school coaches that called me and said, ‘Man, this Tyrone Crowder is one of the most physical linemen we’ve had the last couple years.'”

On defense, Clemson signed three defensive ends in local product Shaq Lawson, the nation’s No. 1 ranked prep school prospect, Ebenezer Ogundeko of Brooklyn, NY, and Dane Rogers Jr. of Shelby, NC, as well as one defensive tackle in Scott Pagano, who hails from Hawaii. In addition to Boulware and O’Daniel at linebacker, former Daniel High standout D.J. Greenlee also signed, while the eight defensive backs rounded out the class.