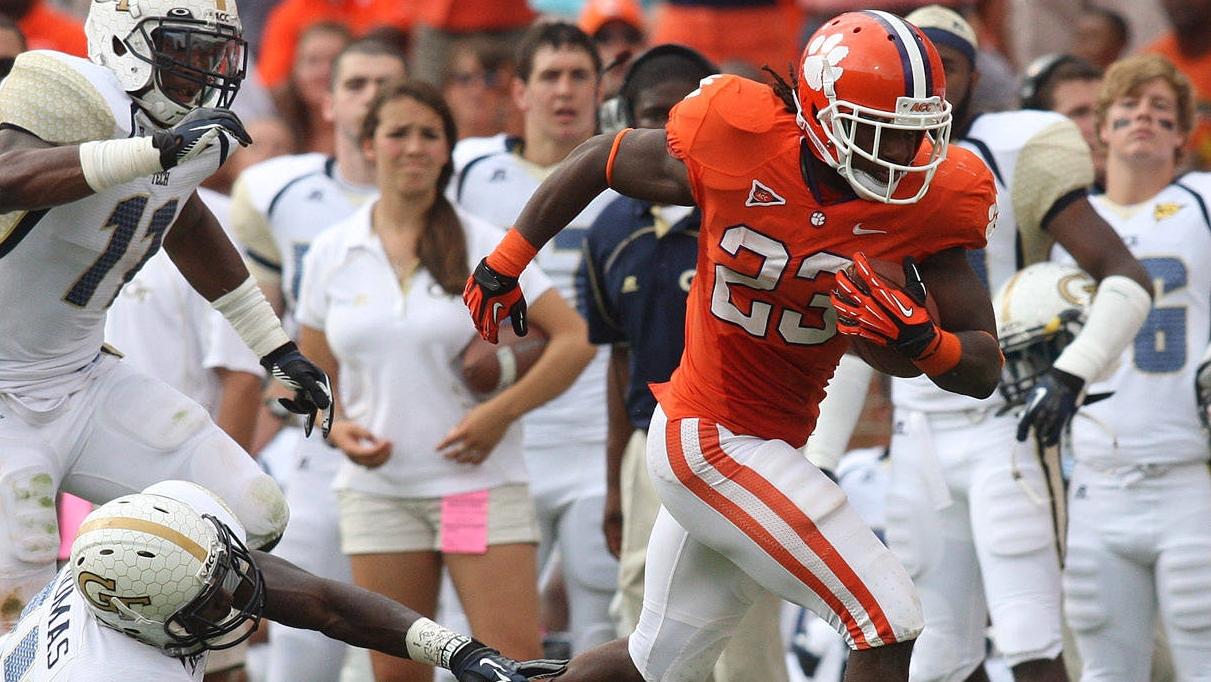 CLEMSON, SC – With Clemson and Virginia Tech set to square off Saturday in a rematch of last year’s ACC title game, both teams know they can ill afford to lose if they hope to make a return trip.

“This is a big game,” Tiger head coach Dabo Swinney said at his news conference Tuesday to preview the tilt. “They’re very much in it from a conference standpoint. So are we. But there’s not a lot of room for error for either team.”

No. 14 Clemson (5-1, 2-1 ACC) comes in off an open date last weekend after beating Georgia Tech 47-31 on Oct. 6. The Hokies (4-3, 2-1), meanwhile, rattled off 41 unanswered points to beat Duke on Saturday after trailing 20-0 in the first quarter, marking their biggest comeback under head coach Frank Beamer.

“I think you saw what Virginia Tech’s really made of,” Swinney said. “They got down 20-0 on Homecoming, and then they probably played their best football of the year. They responded. I thought they physically took the game over, they made plays and just put it together as a team, and it was a very impressive comeback.”

The Tigers used their bye for some much-needed healing, and Swinney said all the players listed on the team’s injury report – wide receiver Martavis Bryant (groin), running back D.J. Howard (shoulder), tight end Brandon Ford (ankle) and linebacker Lateek Townsend (thigh bruise) – were expected to play against the Hokies.

“They’re all back and practicing and look good to go,” Swinney said. “We don’t anticipate anybody being out. … We had a long list of guys with bumps and bruises. So for everybody to be able to have a couple days off was huge.”

As noted, the teams last met at Bank of America Stadium in Charlotte for the ACC Championship Game in December, as then-No. 21 Clemson scored 28 points in the first 17 minutes of the second half to beat No. 3 Virginia Tech for its first ACC title in two decades.

The Tigers had also beaten the Hokies 23-3 in Blacksburg, Va., during the regular season to snap a five-game losing streak dating to 1989 in the series, marking the first time in Clemson history it had beaten the same team twice in one season.

“I know it’ll be personal for them,” Tiger senior center Dalton Freeman said. “We beat them twice last year, and one of them was in the ACC Championship Game, and they can’t lose another game really to be in contention for the division title on that side. So we’re going to get their best shot, and we know that.”

Tech has stumbled out of the game somewhat this season, losing three games away from home in a four-game stretch before rebounding to beat the Blue Devils last week, but has still lost just once in league play and sits only a half-game behind first-place Miami in the ACC Coastal Division entering this week’s games.

“This is a team that, in my opinion, has really been the bell cow of this league the last several years and kind of been the measuring stick,” Swinney said. “They have been very consistent. … I know everybody talks about that they haven’t played as consistently this year, but they’re Virginia Tech.”

And the Hokies have made quite a habit of winning road games like this one. Since it joined the ACC in 2004, Tech has a 27-6 record in league road games.

Clemson, on the other hand, has been exceptionally difficult to beat at Death Valley of late. The Tigers have won 10 games in a row on their home field dating to a season-opening win over Troy in 2011, and a victory Saturday would allow them to match 11-game home win streaks from 1989-91 and 1937-42 as the longest in program history.

Swinney pointed to his team’s fans as the secret to their success at home, saying the crowd’s energy and enthusiasm helped them to rally from a 21-20 second-quarter deficit to beat Georgia Tech handily two weeks ago and keep that streak alive.

“I cannot tell you just what a difference our fans made in the game against Georgia Tech,” Swinney said. “It was a tangible effect on the game, especially in the fourth quarter. It was incredible. … That’s what you want your home-field advantage to be like. That’s why it’s tough to win on the road at a place like Clemson.”

Another aspect of Saturday’s game that should make for an outstanding atmosphere is its designation as Military Appreciation Day. Clemson will honor its fallen soldiers, veterans and current military personnel during pregame, in-game and halftime ceremonies.

Wide receiver Daniel Rodriguez, a U.S. Army veteran of wars in Iraq and Afghanistan and recipient of a Purple Heart, will lead the Tigers down The Hill carrying an American flag prior to the game.

“This was a military school up until about ’58 or so, and it’s something that we embrace,” Swinney said. “Our military is so underappreciated for what they do. Having the unique opportunity to spend time with Daniel Rodriguez has even further impacted that in my mind. Because I think about myself, I think about my children, and here’s a guy that’s 18, 19 years old, in some hole in Afghanistan, so far removed from the freedoms that we take for granted. … I didn’t come from a military background, but I certainly have gained a tremendous appreciation for the military being here at Clemson.”