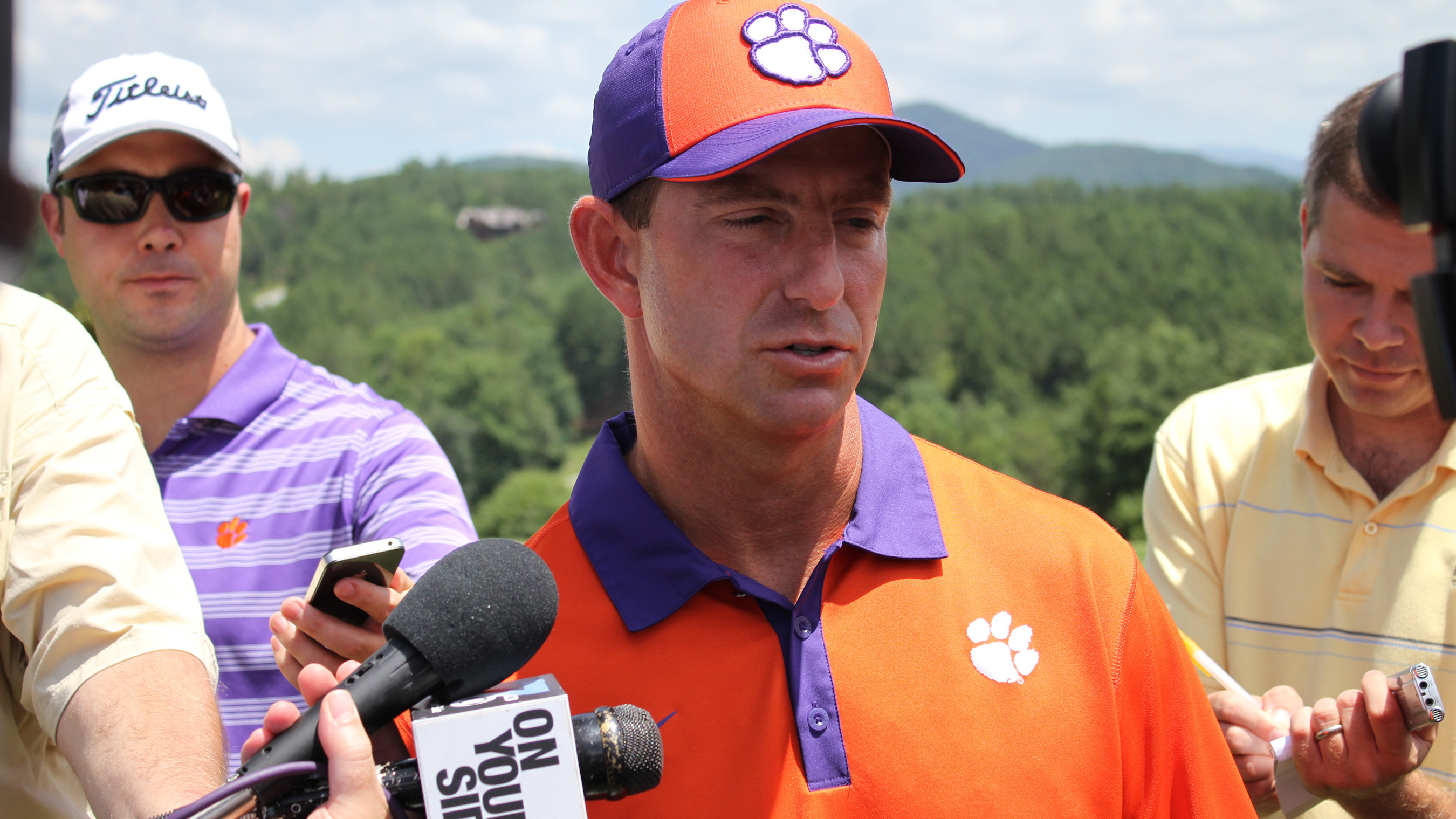 SUNSET, SC – Dabo Swinney says he’s been a feeling a bit like Ray Charles lately: He’s got Georgia on his mind.

Swinney’s Clemson team will open its 2013 campaign August 31 by renewing its once-bitter rivalry with the Bulldogs in a clash of teams expected to vie for top-10 status and both with aspirations of being in the BCS title mix.

And while the anticipation is certain to reach fever pitch by the time the game kicks off at 8 o’clock that night, Swinney said it is important his Tigers treat the game just like any other as they set about preparing for it.

“Our players don’t live in a cave. They understand the importance of this game,” he said. “But it’s one of those things you really have to manage and be careful of in games like these. … Both of these teams have big aspirations, big, big dreams for the season, and I think both of us hope to be in that top 10, competing for the whole thing when it’s all said and done. And the winner of this game isn’t guaranteed a slot, and the loser isn’t guaranteed to be out of it. … The key thing is to stay focused on the right things – your commitment, your preparation, your work ethic, our formula for success as we’ve defined it at Clemson – and the rest of it will take care of itself.”

Football season will begin in earnest when that game kicks off in Memorial Stadium, but it got its unofficial start from a media standpoint Tuesday with Swinney’s annual golf outing at The Reserve at Lake Keowee, where the head coach and all nine of his assistants shared their thoughts on the upcoming season.

Much of the discussion surrounded the lofty expectations for the Tigers entering the season and the player on whom much of that hype is based, reigning ACC Player of the Year and first-team All-American quarterback Tajh Boyd, who announced in January he would return for his senior season after accounting for 46 touchdowns in 2012, just one less than Heisman Trophy winner Johnny Manziel of Texas A&M.

“Tajh Boyd is not only a great player, but he lights up a room and he’s such a fun guy to go to work with every day,” Swinney said. “It’s important to him to win. He’s got guts, he’s got toughness, he’s got instincts. He just is a special person, and I’m so proud of his development and how he’s handled his success and his disappointments and how he’s represented our program and this university for four years. I want to see him have a great five months or so – because he deserves that. My hope and prayer is that he stays healthy. Because if No. 10 is on the field, we’ve got a chance.”

Boyd is the leader of an offensive unit that set 101 school records (33 team and 68 individual) in 2012 and features 26 returning lettermen on offense, 17 of whom played at least 100 snaps last year.

Offensive coordinator Chad Morris, who enters his third season in that role, said he will be able to open up even more of his playbook this year thanks to Boyd and his mastery of the offense.

Morris said the Tigers’ 25-24 win over LSU in the Chick-fil-A Bowl showed the kind of senior season his signal-caller is capable of having.

“I just think that game really demonstrated that (Boyd) kind of said, ‘OK, I’ve got this now. I’ve got it figured out,'” Morris said. “The toughness that he showed getting knocked down as many times as he got hit in that game and to get back up and lead the team back to win the ball game, I think that really shows a lot about Tajh.”

On the defensive side of the ball, Clemson officially returns just six starters and only two of its top six tacklers, but there are 10 returning players on defense who started at least five games last year.

Brent Venables enters his second year in charge of the unit and is hopeful his group can continue its growth from 2012, when it played its best football in its final game.

The Tigers finished the season 22nd in the nation in sacks, including a season-high six in the bowl game. Clemson held the SEC Tigers to just 219 yards and nine first downs, and forced eight three-and-outs in the contest.

“Every season starts over,” Venables said. “Just because you beat LSU – I also know that we lost to South Carolina. And our players know. … You control what you can control, put your mind where it needs to be, invest in the right things and the right thoughts. … It’s an everyday culture, attitude and mindset. The day we sign you, it’s about competition and toughness and work ethic, all those little things.”

With that, the Tigers will open fall camp August 2 to begin preparations for the opener against the Bulldogs, the first meeting between the two longtime rivals since 2003.

Georgia won that game 30-0 in Death Valley in what was, ironically, Swinney’s first game at Clemson as an assistant coach on Tommy Bowden’s staff.

“Listen, when the scoreboard lights up, it’s a big game – regardless of what the name on the jersey is,” Swinney said. “Having said that, just like last year when you’re going to open up with a game like Auburn, there’s just so much more noise from a national standpoint surrounding the game than maybe you would have if you were playing more of a non-BCS-type opponent.

“That’s the biggest difference – just the national exposure that comes from it. And then you throw in the fact that it’s Georgia. When I first got the job (as head coach) in December of ’08, I can remember somebody asking me about Georgia and saying how excited they were to play Georgia in 2013. And I’m like, ‘I just hope I can live until 2013.’ That was just the furthest thing from my mind. But that’s the significance of this game.”