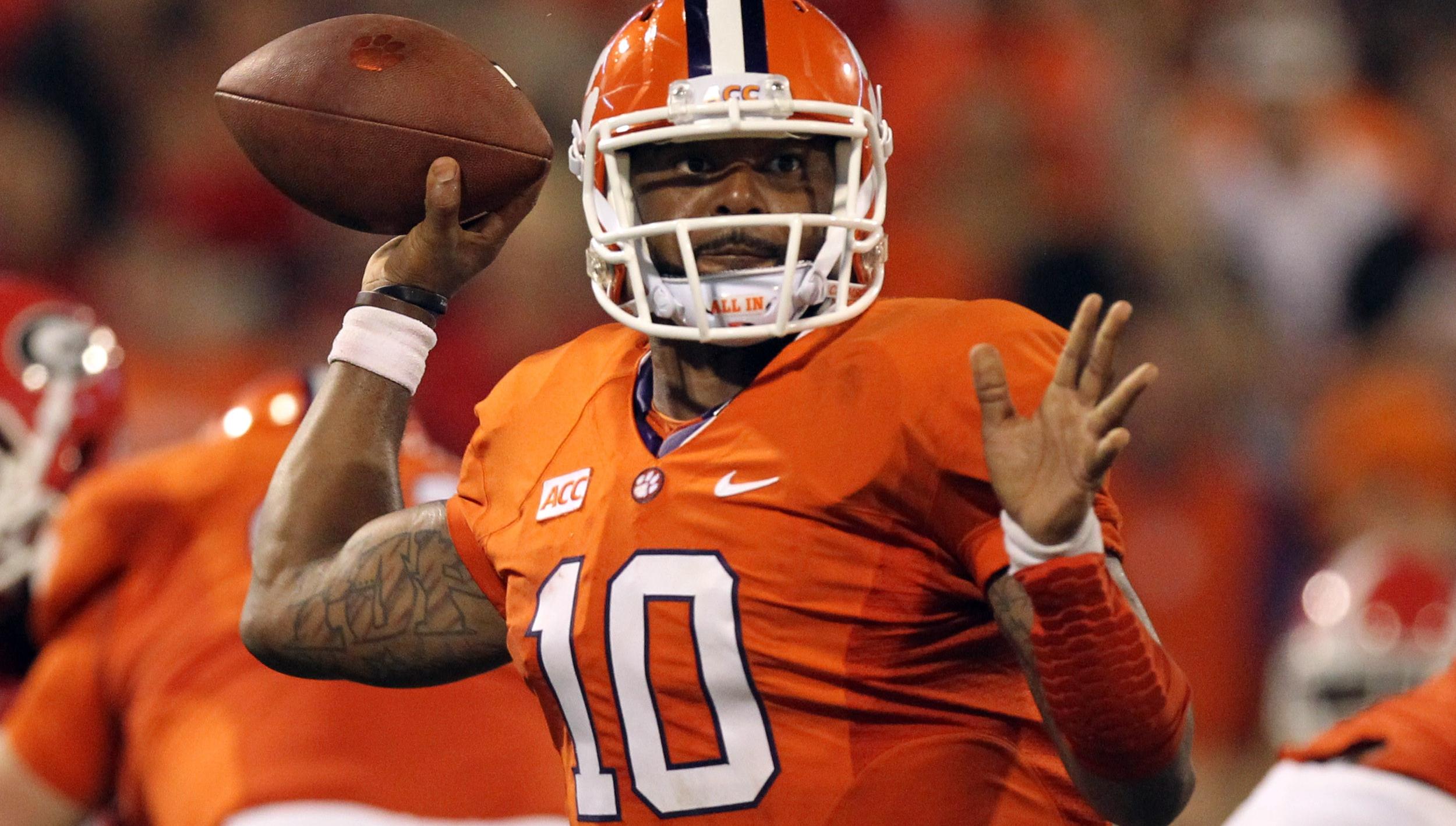 EXCLUSIVE: Tigers ‘Feel Different’ Ahead of Trip to NC State

CLEMSON, SC – Driving home from Clemson’s campus Monday, Tajh Boyd had his music up and was enjoying the ride when fellow senior Quandon Christian turned to him from the passenger seat and said, “I feel different.”

The Tiger quarterback asked Christian what he meant, and the linebacker replied, “I feel like this is a different team.”

The comment came out of the blue, but Boyd told the story Tuesday in the context of their upcoming game Thursday night (7:30 p.m., ESPN) against NC State in Raleigh, NC, where the ACC Atlantic Division foes will meet in the league opener for each.

Clemson comes into the game with a 2-0 mark and ranked No. 3 in the nation by The Associated Press – its best ranking since the 1988 season – and it was perfectly clear to Boyd what Christian was talking about.

The last time the Tigers traveled to Carter-Finley Stadium in 2011, they were flying nearly as high, ranked No. 7 in the country with an 8-1 record, but committed four turnovers and didn’t reach the end zone until the final 90 seconds of a 37-13 loss.

Christian’s point was simple – this year’s team isn’t destined for a similar fate.

“He felt like we’ve grown as a program, grown as players, and the leadership role we’re in as seniors, part of your job is to help these younger guys understand,” Boyd said. “Because a lot of them weren’t here when we had the 6-7 season (in 2010) and the adversity and struggle with that situation. For the older half of the group, we understand what it feels like to be in bad situations.”

Perhaps no player on the team has grown more from the last game at NC State than Boyd himself, who threw two interceptions that night, including one on fourth down near the goal line, but bounced back to lead the Tigers to the ACC title that season.

“He was a first-year starter, and all of a sudden, it’s not coming as easy and he’s not playing as well,” Clemson head coach Dabo Swinney said. “It was a good opportunity for him to continue to get better, and he came back and responded and led this football team to its first 10-win season and first ACC Championship in a long time. And that’s what champions do – they respond.

“Same thing last year, he didn’t play very well in the South Carolina game. But he responded and came back and played very well in our bowl game, probably as good a game as I’ve ever seen a quarterback play.”

Boyd will be without one of his top targets Thursday, junior receiver Charone Peake, who suffered a torn ACL in practice last week and will miss the rest of the season.

Peake will delay surgery on the knee until the week of the Boston College game in mid-October, according to Swinney, because the players will have fall break the next week and that will allow him time to recover without having to worry about getting around to classes.

Peake’s classmate and former Dorman High School teammate Adam Humphries will start in his place, and Swinney insisted he had full confidence in Humphries being inserted into the starting lineup.

In fact, Swinney said the moment he became “sold” on Humphries as a football player was when he was on a recruiting visit to Dorman to see Peake and attended a basketball game that both were playing in.

“I went to watch Charone Peake, and I couldn’t take my eyes off Adam Humphries,” Swinney said. “It’s a high level of basketball there at Dorman, and he was the point guard – and was just running the show. And defensively, he was just a terror. That is when I said, ‘We better take a closer look at this guy.’ And we did. And (Dorman head football coach David) Gutshall was saying, ‘The best football player on our team is this guy right here.’ And boy, he is the epitome of a football player.”

Humphries has seven catches for 53 yards in two games this year and had 41 grabs for 280 yards and a touchdown last season.

While Humphries began the season in a backup role, Swinney said that had more to do with his versatility making him a perfect option to play multiple receiver spots, than being any indictment of his abilities.

Beyond Humphries, the loss of Peake will create more opportunities for a trio of freshmen – Germone Hopper, Mike Williams and T.J. Green – to make plays.

Hopper had six catches for 66 yards and two touchdowns in Clemson’s 52-13 win over South Carolina State on September 7, while Williams and Green also had the first catches of their college careers that day.

“They’re ready,” Swinney said. “The South Carolina State game was big for them just to be able to catch their breath. All freshmen go through kind of a transition phase, but when you open up with a team like Georgia, that wasn’t really the stage for them. … I really like where they are from a development standpoint.”

The Tigers will almost certainly need them to contribute Thursday, as those three freshmen represent exactly half of Clemson’s two-deep depth chart at wide receiver.

But – getting back to the original anecdote – the development of young players such as those was one of the major reasons Christian gave Boyd as to why he feels this year’s Clemson team is so different from years past.

“He started talking about the younger guys and their role,” Boyd recalled. “I think just this week of practice alone was very encouraging. The guys were dialed in. When we step on that field, there is nothing else that matters besides football. That’s something that is preached to us and really coached to us, but I think the guys really understand that.”