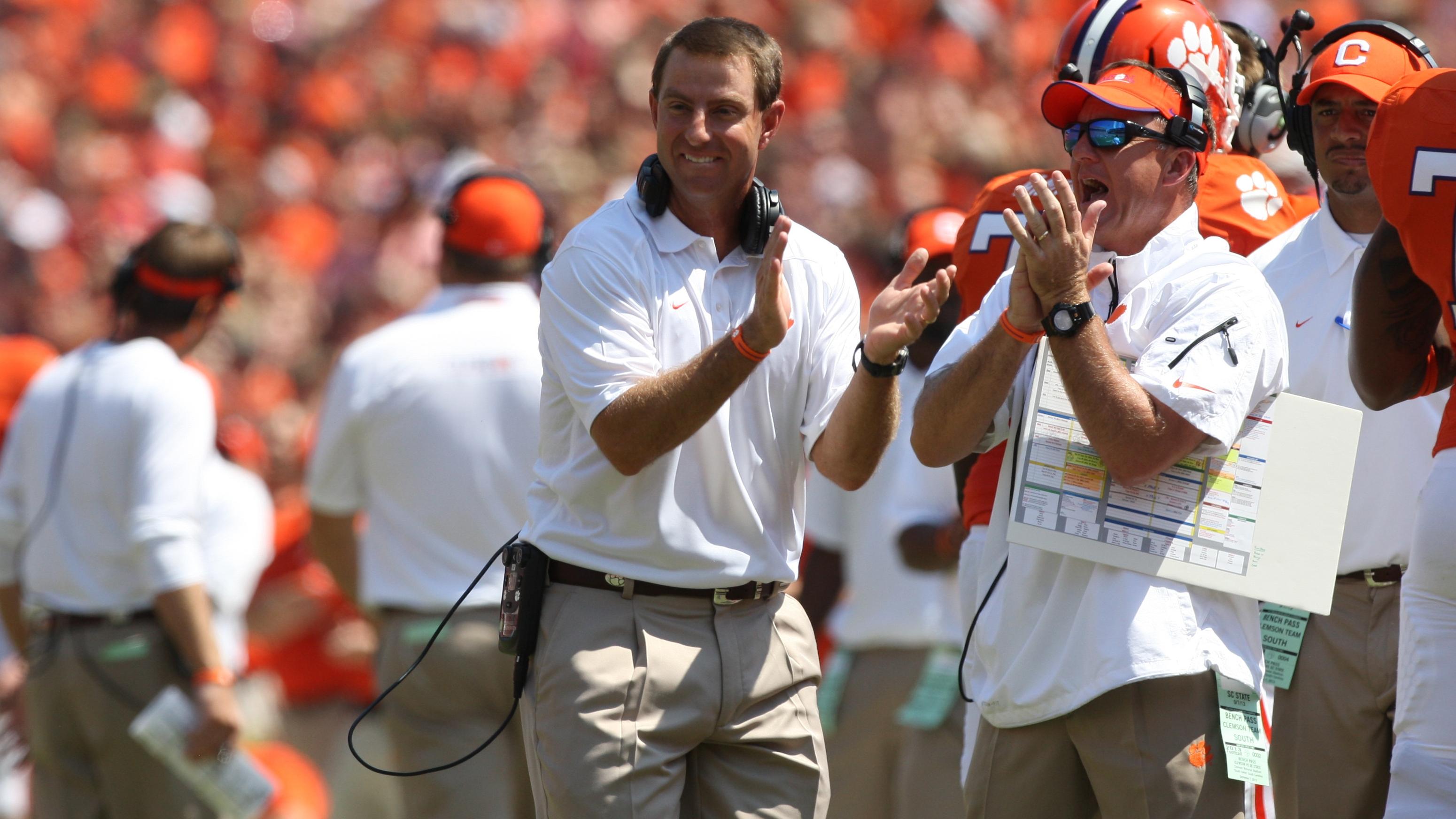 CLEMSON, SC – Back in his playing days at Alabama, Dabo Swinney enjoyed going on the road into hostile environments and hearing rival fans hurl insults his way. They called him “Skinny Swinney,” he recalls, and presumably much worse.

“I loved the hostility of it,” the Clemson head coach said at a news conference Tuesday ahead of his team’s upcoming road trip to Syracuse. “I thought that was great.”

The third-ranked Tigers (4-0, 2-0 ACC) will make their first visit to the Carrier Dome on Saturday (3:30 p.m., ABC/ESPN2), while the Orange (2-2) will play their first game as a member of the Atlantic Coast Conference after competing in the Big East since 1991.

Syracuse will be a divisional foe for the Tigers, so this will become a biennial trip for Swinney’s squad, but he knows the Orange will have extra incentive this time since the game will mark their introduction to the league.

Not that they haven’t been tough enough to beat in the Carrier Dome anyway.

The latest Heisman-contending quarterback to try his hand at winning at Syracuse will be Clemson senior Tajh Boyd, who comes into the contest needing 29 yards of total offense to become the third quarterback in ACC history to reach 10,000.

“I love playing on the road – not as much as playing home, but just the competitive nature comes out even that much more,” he said. “It’s always a hostile environment, especially somewhere that you’ve never been. It’s going to be a challenge. It’s their homecoming, their first ACC game, so their crowd is going to be pumped up.”

Boyd accounted for 380 yards of total offense and four touchdowns in a 56-7 rout of Wake Forest on Saturday, and admitted the performance helped to get him back in a rhythm after he’d put too much pressure on himself to put up big numbers early in the season.

On Saturday, the more significant pressure on Boyd will be of the external variety.

Scott Shafer is in his first season as the Orange’s head coach after he served as its defensive coordinator since 2009, but Syracuse has maintained his philosophy of putting heavy pressure on opposing quarterbacks.

“They bring pressure from everywhere,” Swinney said. “They’ll overload you from the outside; they’ll ‘Gut X’ it on the inside; they’ll bring secondary pressure. They play a lot of Cover 0 (no deep safeties). We haven’t seen much of that.

“They will run a house blitz and bring one more than you can block no matter what you do with your protections. So, you’ve got to win matchups when people do that, and you’ve got to know who the free guy is. That’s the challenge from a protection standpoint, and the quarterback has got to be dialed in.”

Because of that, Swinney admitted it was a concern that starting right tackle Gifford Timothy is listed as questionable (concussion), but he also noted the offensive line has held up well this season considering the bumps and bruises it has dealt with.

“It seems like every game we’ve had something going on there, but as a result of that – Kalon Davis has stepped in there, we’ve gotten Shaq Anthony a lot of work, Eric Mac Lain‘s been in there and gotten a little taste of it, Isaiah Battle‘s gotten a lot of work in these first four games,” Swinney said. “So, it has been good to see different guys go in there and get some opportunities, and I think that is going to pay off for us.”

Of course, every team wants to put pressure on the quarterback, but the danger is if extra pass-rushers are used to do it, and don’t get there, there are fewer players left downfield to tackle the receivers.

Against a receiving corps featuring players such as Sammy Watkins, who is coming off his ninth career 100-yard receiving game against Wake Forest, a game in which he scored a 64-yard touchdown on the third play from scrimmage, that strategy could prove particularly risky.

“I feel like we’ve got some of the best skill guys in the country here,” Boyd said. “That’s just how we’ve developed and how we recruit. There will be opportunities to go out there and make plays in the game. They’re going to do some things defensively that we’ll have shots to take. They’ll take some risks, but a defense like that is risk/reward sometimes. For an offense, you just have to go out there and make the plays that are there.”

Clemson has made plenty of those plays this year. It ranks 16th nationally in scoring offense (43 points per game) and 18th in passing offense (312.5 yards per game).

More importantly, it has rolled up those stats without turning the football over. The Tigers have not committed a turnover all season with Boyd under center – a total of 263 plays – and the senior has set a school record by throwing 166 consecutive passes without an interception.

“We’ve got to take care of the ball,” he said. “It’s just that simple. We will have a chance to win every week if we take care of the football. We’re playing very good on defense. Right now this is the most complete team that we have had, as far as our ability to win in different ways and our ability to complement each other – offense, defense and special teams.

“There are only seven teams in the country that are in the top 25 in scoring offense and scoring defense, and we’re one of them – and we haven’t been there before.”

Of course, the same could be said of the Carrier Dome.