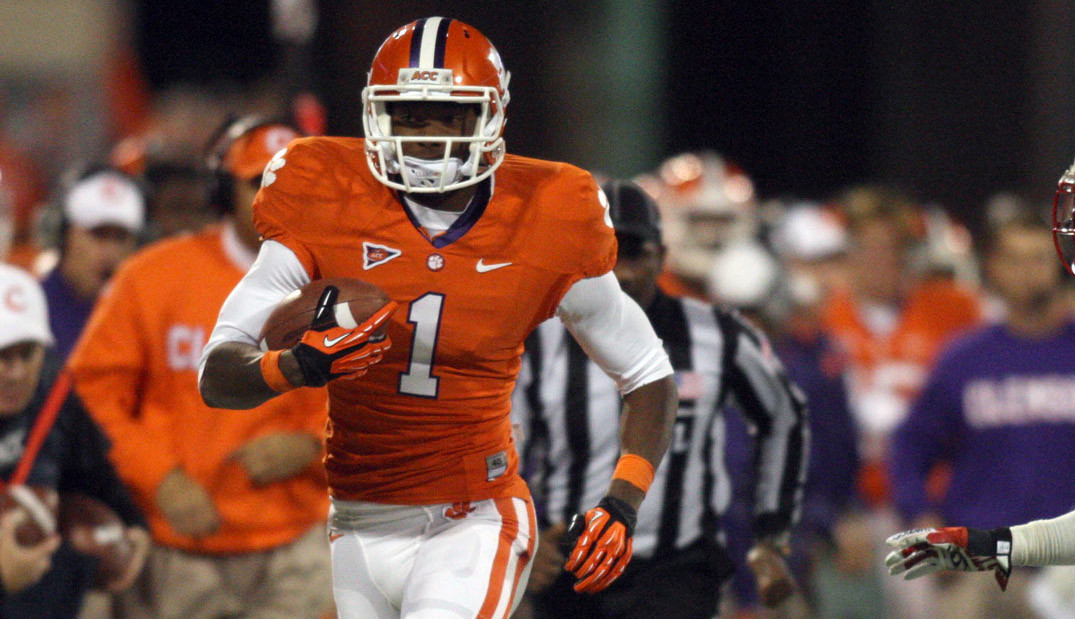 CLEMSON, SC – In talking with junior receiver Martavis Bryant after a session of Clemson’s fall camp, one phrase kept coming out of his mouth over and over again: “keep working.”

There was a time when his coaches and teammates might have wondered if those words were even part of Bryant’s vocabulary.

Most recently, that time was last December in the weeks leading up to the Chick-fil-A Bowl. Clemson’s 25-24 comeback win over No. 7 LSU was undoubtedly the most memorable moment of its season, which is what makes the memory a painful one for Bryant.

Bryant is proud his team won, but uses the pronoun “they” – instead of “we” – to refer to those who did the winning.

Bryant was suspended for the bowl game due to academics.   He was not ineligible, but did not live up to Coach Swinney’s standards in a number of areas.  Bryant points to that event as what finally convinced him to get serious about both school and football.

“It was hard because my mom was crying about it,” he said of the bowl game. “I had to see her face crying, and I can’t accept letting her go through that again.”

Few have ever questioned Bryant’s raw talent to be a star on the college gridiron. At 6-foot-5 and a solid 200 pounds with long arms, enormous hands, speed to burn and a knack for hauling in deep balls in acrobatic fashion, there is little Bryant is missing in terms of tools.

Since January, he has also had the focus and work ethic to put those tools to use.

“Martavis has been probably the most consistent player we’ve had all summer,” senior quarterback Tajh Boyd said. “Just a total transformation and an unbelievable player. I don’t think you’re going to see a guy that’s as physically ready as him, and mentally he’s grown up and is where we need him to be. He’s going to make a major move and be a critical part of the season as well, and I’m excited for him.”

Bryant had his moments last season. He caught four touchdowns and led the nation in yards per catch among players with at least 10 receptions with a 30.5-yard average.

But Bryant barely had enough catches – exactly 10 – to qualify for the designation.

Going into this season, which opens for the No. 8 Tigers on Aug. 31 at home against No. 5 Georgia, Bryant wants to be a receiver the coaching staff looks to for first downs, not just touchdowns.

Bryant met with Tiger head coach Dabo Swinney after the bowl game, and Swinney encouraged him to get serious about his life. According to Bryant, however, his real motivation to do that came from another source.

“My family,” Bryant said. “I’ve just got to take care of them and be there for them. I can’t let them down.”

No matter the source of motivation, Swinney said the difference has been obvious in Bryant and praised him for his attitude and work ethic.

“I haven’t had to do anything with Martavis,” Swinney said. “He’s a guy that has been in the doghouse a lot, but not since January. I was the biggest skeptic of all, but I’m a believer. His teammates, they trust him now. They’ve never trusted him. Now, they are sold-out trusting him.

“He’s paid the price. You reap what you sow, and what he’s gotten the first two years here is what he sowed. … It’s good to see him buying in, and I don’t have any doubt that he’s going to reap the rewards for his commitment.”

The junior from Calhoun Falls, SC, said he has been working primarily with the first team at the “9” receiver position – the position DeAndre Hopkins played last year – in coordinator Chad Morris‘ offense during the early days of camp.

But Morris said that is far from set in stone, as he plans to move Bryant – as well as star wideout Sammy Watkins – around until he finds the best fit.

In the second season in Morris’ system last year, Clemson’s offense averaged 41.0 points and 512.7 yards per game, both school records by a large margin. With the return of Morris for his third season calling the plays and Boyd for his third season pulling the trigger, Bryant believes the Tigers could be poised for even more this fall.

“The sky’s the limit if we keep working,” Bryant said.

And that’s exactly what he plans on doing himself.