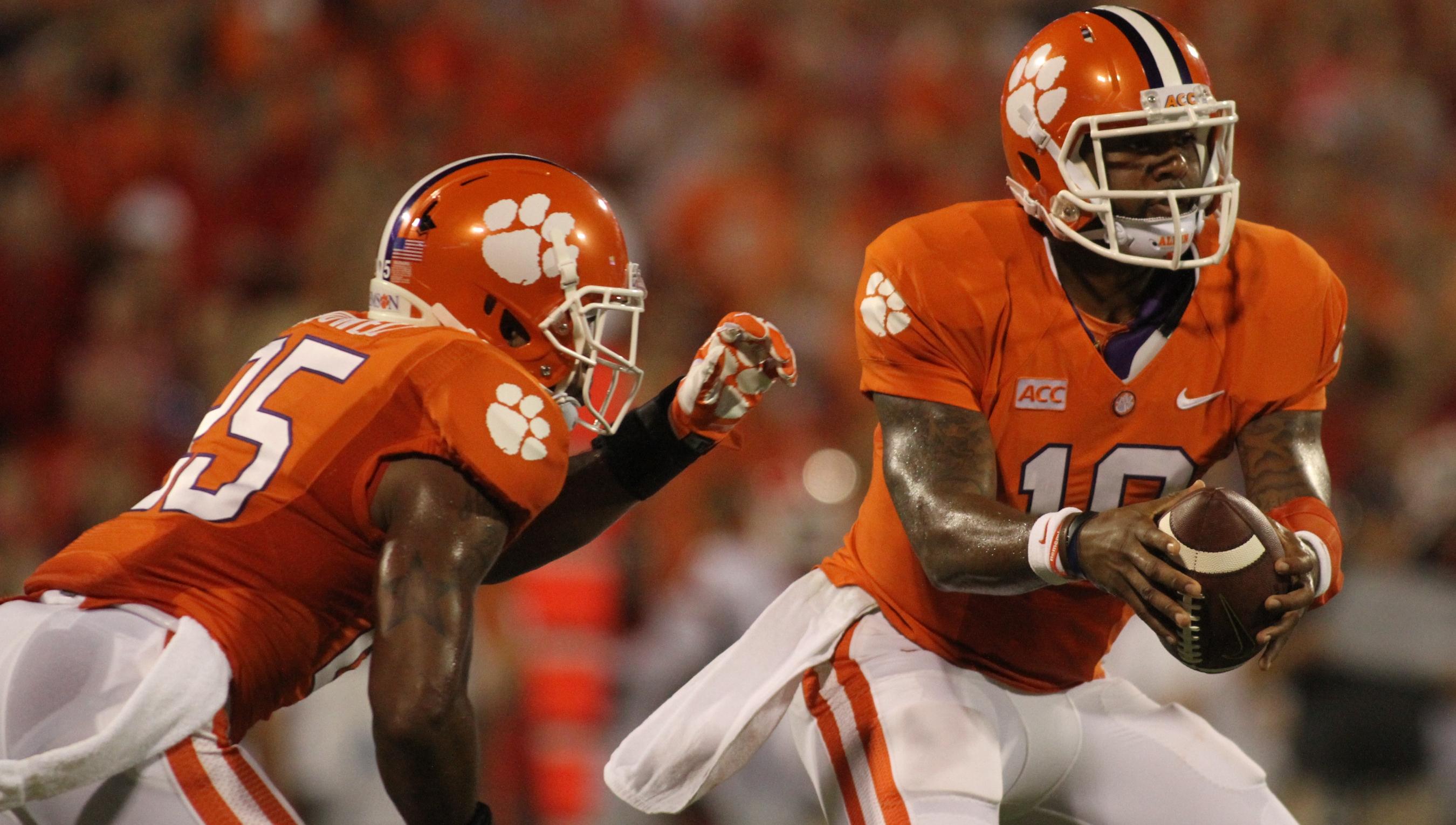 EXCLUSIVE: Swinney: Tigers Must Improve to have Special Season

CLEMSON, SC – It would have been awfully easy for the Clemson football team to still be basking in the afterglow of Saturday’s massive victory over Georgia come Tuesday, when head coach Dabo Swinney held his news conference to preview this week’s game against South Carolina State.

While Swinney was at the podium, the latest Associated Press poll was released and showed the Tigers had jumped from No. 8 to No. 4 – their highest ranking since 1988 – by virtue of their 38-35 win over the then-No. 5 Bulldogs.

Clemson actually received a first-place vote in Tuesday’s AP poll for the first time since the preseason of 1991, as it was one of only three teams in the nation that received first-place votes: Alabama, Ohio State and the Tigers (albeit with the Crimson Tide nabbing 58 of the 60 total).

Of course, many of the questions Tuesday dealt with how the Tigers would come back to Earth after beating the powerhouse Bulldogs of the SEC and avoid a letdown against the in-state Bulldogs of the FCS.

But for Swinney, the goal for Saturday’s game at Memorial Stadium (12:30 PM, RSN) isn’t for his team to be as good as it was against Georgia. The goal is to be even better.

“We are much, much, much better this year than we were this time last year,” he said. “That team last year was pretty good now. They won 11 games and did some great things. But here’s the deal: That team got better and better and better all through the year. So the challenge to this year’s team is – will you improve? Will you stay focused? Will you stay committed to our standard and our formula? If this team will do that, then we’ve got a chance to have a special year.”

Senior quarterback Tajh Boyd finished the opener 18-of-30 for 270 yards and three touchdowns passing and also ran for two scores. Those numbers were enough to grab the top spot in the first HeismanPundit.com Heisman Straw Poll of the season released Tuesday.

But Boyd’s receivers dropped a number of crucial passes, and Swinney said Boyd himself was to blame for poor offensive tempo at times because he often didn’t move from one play to the next with enough urgency.

“One of the things I pride myself on is being teachable,” Boyd said. “Whatever it takes to get better as far as going faster with the tempo, I’m going to do. It makes it hard when you’ve got guys like Rod (McDowell) making moves like that in the backfield. I was spectating at that point.”

On the opposite side of the football, a perfect microcosm of the Tigers’ desire to continue improving after a stellar performance lies with linebacker Spencer Shuey.

The senior was named ACC Linebacker of the Week on Tuesday after he recorded a team-high 18 tackles and recovered a key fumble that led to a Clemson touchdown.

But Shuey also admitted he was to blame for the Bulldogs’ biggest offensive play of the game – Toddy Gurley’s 75-yard jaunt for a first-quarter touchdown – and needed to learn from that mistake.

“I definitely take responsibility for that long touchdown,” Shuey said. “I just got a little wide and a little flat-footed, and just got kicked-out by the fullback. It was definitely my play to make.”

Shuey was one of four Tigers who garnered ACC Player of the Week honors, as Boyd, wide receiver Sammy Watkins and offensive lineman Ryan Norton were also tabbed at their respective positions.

“I think the great teams learn from even the games that they win,” Shuey said. “You’ve just got to go back and always strive to get better, and always try to critique everything you do.”

Clemson’s defense allowed 545 yards and five touchdowns to Georgia’s high-powered offense, but was largely responsible for turning the momentum of the game by holding the Bulldogs without a first down for six straight possessions across the halftime interval.

With that game representing the start of his second season as the Tigers’ defensive coordinator, Brent Venables was pleased with the play of his unit, particularly as compared to its first game last season.

“The zone play a year ago was like a trick play,” Venables joked. “When you’re not sound that way, it’s hard to put everything else together. (Georgia) popped a couple runs, and they are pretty good up front and with their running backs. So we certainly weren’t error-free by any notion, but we have a lot better gap integrity, a lot more discipline, a lot more aggression, and we’re certainly a lot more physical than we were a year ago in the opener.”

Clemson will face South Carolina State for the first time since 2008, when James Davis ran for three first-half touchdowns in a 54-0 romp, which also represents Clemson’s most recent defensive shutout.

Ironically, the Tigers entered that 2008 season with similar preseason hype to this year’s team, as they were ranked No. 9 going into their opener against Alabama.

Of course, that game didn’t go well for Clemson, and it came into the meeting with SC State three weeks later with a drastically different feeling surrounding the program than it has now.

“We’re a long way from where we were at that point,” Swinney said. “It’s been four years of building a foundation, and I think we have a foundation in place to sustain some success.

“Two years ago, I made a comment that I didn’t know how the season was going to go, but I felt like we were built to make a run from a personnel standpoint. And I think that we’re kind of in the middle of that.

“I think that we’ve got a very talented team, and I know that a lot of people may hope that Clemson goes away or fails – and we very well could lose a game. And if losing a game is ‘pulling a Clemson’ then there are a lot of people pulling a Clemson out there. But I think we have a good foundation in place now that hopefully will breed some consistent success for this program for a long time to come.”