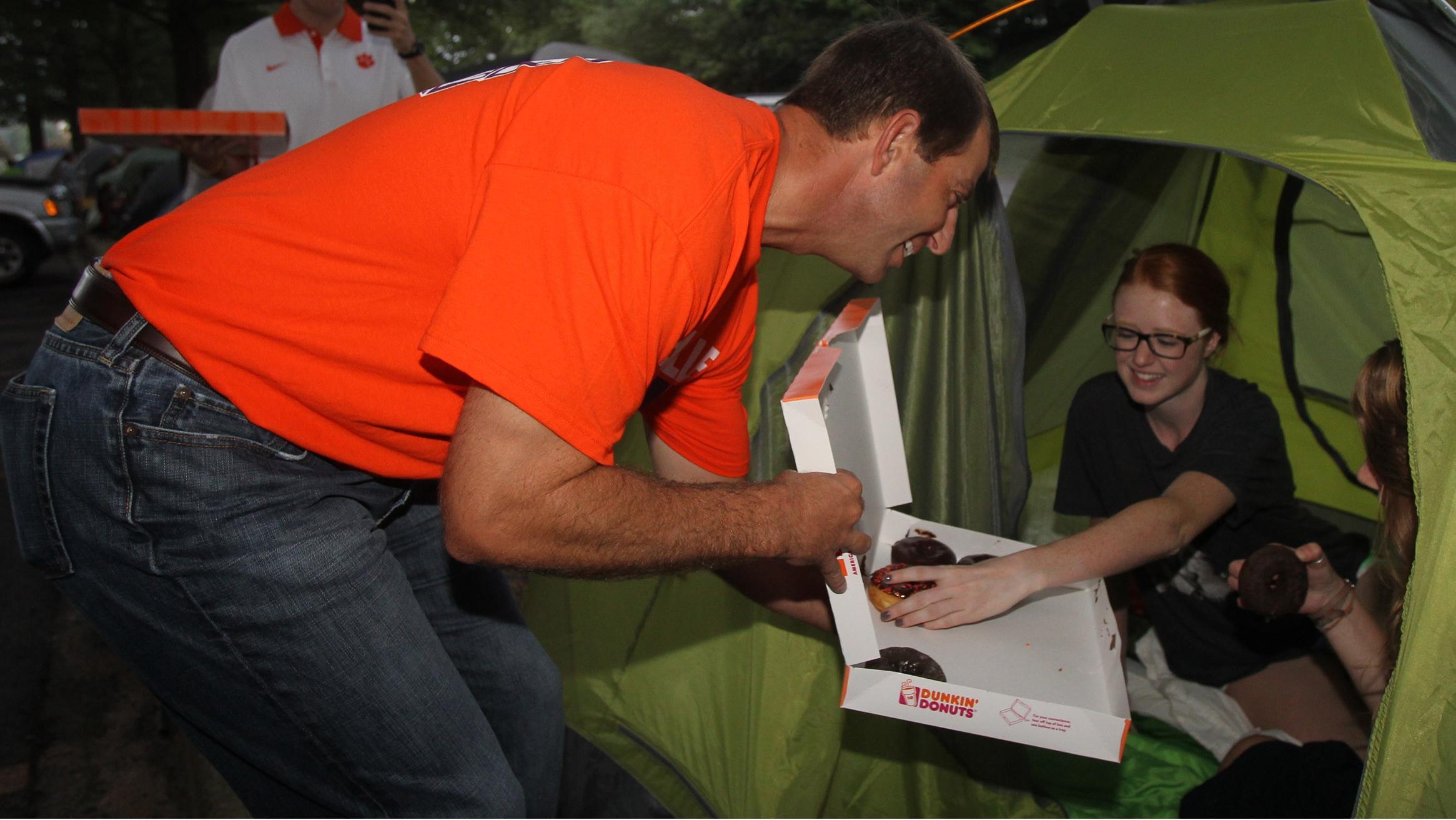 CLEMSON, SC – On August 31, Clemson and Georgia will square off in the first battle of top-10 teams to open a season in Clemson history, with both looking to ascend even higher in the polls.

More than two weeks before that game kicks off inside Memorial Stadium, students began jockeying for position in a different pecking order just outside – the line for tickets.

With tents now set up in the median across from the IPTAY Center, stretching down the Avenue of Champions toward Fike Recreation Center then wrapping around the corner of Williamson Road and up the ramp to Gate 20 of the stadium, the first tent of IPTAY Collegiate Club members awaiting tickets was erected bright and early on the morning of Saturday, August 17.

Six mornings later, the inhabitants of the tent village were paid a surprise visit by Tiger head coach Dabo Swinney. With the help of IPTAY staff members, Swinney handed out doughnuts Friday morning to make sure his most fervent supporters were well nourished as they awaited tickets.

“That’s the passion that makes Clemson special, that people would do that,” Swinney said. “It’s just amazing. I’ve been jogging the last few days and seeing these students camped out, and I just think it’s really neat. And this is just the group that’s already IPTAY members. There’s going to be a whole different group coming in Tuesday for the rest of the week, so it’s exciting that you’ve got this number of people trying to get tickets to the game and support the Tigers.”

The No. 1 spot in line belonged to senior Aaron Nathan and his tent mates, who are no strangers to such campouts.

Nathan camped out for his first football game as a freshman at Clemson after joining IPTAY Collegiate Club almost immediately upon arriving on campus, and he and his buddies also manned the No. 1 position in line for last year’s South Carolina game.

“I’m in a group with about 15 or 20 people,” Nathan said. “One of my buddies set up the tent, and we each take a night. When he sent me that picture of us with the first tent, I was jumping for joy.”

Ticket distribution for IPTAY Collegiate Club members begins Monday at 7:30 a.m., and 24 hours prior to the first distribution, those camped out in tents can move to Gate 9, where they will begin their line through the stadium.

Graduate students and seniors can pick up tickets Tuesday, juniors Wednesday, and sophomores and freshmen Thursday.

Two tents down from Nathan was senior Taylor Swing, whose roommate had made out a schedule for their group to sleep in shifts and man the tent.

To help pass the time while they waited for tickets, Swing and her tent mates had a movie night – live streaming of “The Great Gatsby” – planned on Friday.

Like Nathan, Swing is also a four-year member of Collegiate Club, and she said she’d made some of her best friends while camping out for tickets.

Just a few tents down from Swing were the tents of freshmen Andrew McCarter and Josh Gurman, who were part of a group from Lever and Byrnes residence halls who had teamed up to man the tents and secure tickets for the game.

For them, joining IPTAY Collegiate Club was a no-brainer.

“For 40 dollars, you can get tickets before everyone else,” said Gurman, who came to Clemson from just outside Boston. “As a freshman, you’re the low man on the totem pole. And now we’re (numbers) 10 and 11 in line. So that’s a pretty good deal.”

McCarter, from just outside Hartford, CT, said they had stayed up late Thursday night learning the strategies of camping for tickets from a junior in a nearby tent.

“I believe the only time they’ve ever camped out longer than this was the South Carolina game last year,” McCarter said. “They camped out 10 days, and we’re at eight. So it’s quite an experience. I guess the most stressful time is when they move all the tents from the median over to the cement, and the fact that it’s like an unspoken agreement when you move it. You’ll just see everybody all of a sudden pick up tents and start moving.”

With most of the students weary from a night spent sleeping in their tents, McCarter said it was a nice surprise to see Swinney arrive Friday morning bearing breakfast.

“It’s a great something to wake up to,” McCarter said. “I was pumped (to get to meet Swinney). We were talking to the girls in the tent before us, and they said, ‘IPTAY came around and told us that at 7:15 they were all coming around to give us doughnuts.’ I said, ‘Alright, the alarm’s set at 7 o’clock. We’re good to go.'”

With the Clemson team having wrapped fall camp and turned its attention fully to Georgia, Swinney also reminded the students that Friday night’s “Beanie Bowl” – basically a “practice game” that walks the players through game-day operations such as where to sit on the sidelines – is open to the student body.

“So we’ll serve them some breakfast this morning, and then hopefully they’ll come watch us play this practice game,” Swinney said. “We don’t do any tackling or anything like that.  Everybody is on their feet, but we try to go at full-speed tempo, and it’s the first time everybody is on the sideline together.”

The purpose of camping out for tickets is obviously to secure the best possible seat for the game, although not everyone in Collegiate Club is guaranteed a ticket since there are more Collegiate Club members than Collegiate Club tickets, according to Director of Ticket Operations Kate McCrary.

With Collegiate Club members getting the first chance at tickets, Nathan said joining had been an easy decision for him as somebody who came to Clemson from sports-crazed Boston.

“You pay 40 dollars and you have the opportunity to be in the first row at one of the most important games in recent Clemson history,” Nathan said. “If we win this game, we’re in good standing to be in competition for the national title game. You can’t beat that.”