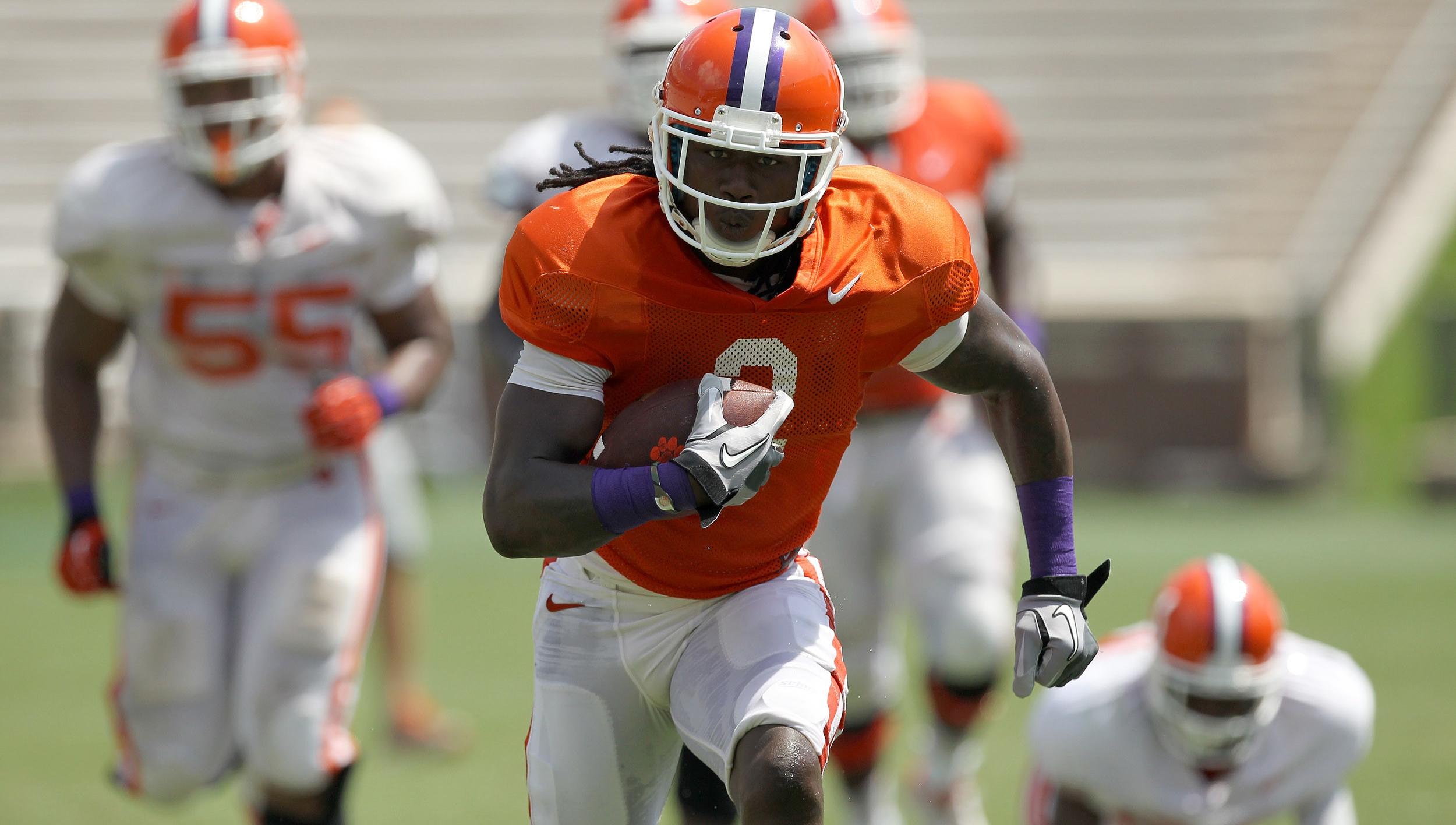 CLEMSON, SC – Clemson’s quarterbacks threw six touchdown passes in Saturday’s scrimmage in Memorial Stadium, although they did it against a depleted secondary missing five players to injury, including three veteran corners.

Such is the nature of intrasquad scrimmages, where everything must be taken with a grain of salt … or several.

“From my perspective as a head coach, you wish you could go scrimmage somebody else and you might walk away with a little different feel,” head coach Dabo Swinney said after. “When you’re the head coach, and they are all your players, you’re never totally happy because if you did a really good job on defense on short yardage, that means you didn’t do a very good job on offense.”

Nonetheless, Swinney walked away from Saturday’s scrimmage, the first of fall camp for the Tigers, feeling very encouraged about his team in one significant regard.

Swinney said his “Pride” team – the name Clemson uses to refer to its third strings on both sides of the ball – was greatly improved on both offense and defense over his four previous preseasons at the helm.

“That’s a sign that we’ve really made some progress as a program because we’ve got some really good, young depth, a lot of good players out there on that ‘Pride’ group,” Swinney said. “There are a lot of guys competing at a high level to try to win a job, and that’s what you want because when you’ve got that you can’t help but improve.”

The top performers of the day came as little surprise, as reigning ACC Player of the Year Tajh Boyd completed 12 of 18 passes for 245 yards and four touchdowns, while junior receiver Sammy Watkins had 104 receiving yards and two scores.

“The offense did pretty well, but we still had a couple turnovers we’ve got to work on,” Watkins said. “The coaches were happy, but they weren’t satisfied.”

Boyd and Watkins hooked up for touchdowns of 65 and 39 yards, and Boyd also had a four-yard touchdown pass to Martavis Bryant and a one-yarder to Darrell Smith.

“Tajh played well outside of one bad play, a really poor read on an interception by Quandon (Christian),” Swinney said. “He just didn’t read it, and Quandon buzzed right underneath it, picked it and almost scored with it. That was his worst play of the day, but I thought he made some good decisions and some nice throws.”

“The receivers are doing an awesome job right now,” Boyd said. “I’m encouraged by those guys.”

Germone Hopper was the second-leading receiver on the day with three catches for 86 yards and would have also had a touchdown catch, but Bashaud Breeland forced a fumble on the goal line, which went out of the end zone for a touchback.

Christian was among the top defensive performers, as he recovered two fumbles to go along with the interception, while linemen Shaq Lawson, Carlos Watkins and Corey Crawford each had two sacks, albeit of the one-hand touch variety.

Another player Venables lauded was junior Tony Steward, who had five tackles and a sack in the scrimmage.

Venables said Steward was one of several players who made him feel good about his linebacking corps.

“I like all of the competition that’s going on,” Venables said. “I wouldn’t say anybody is better than the others, per se. That first and second team and even the third team – between Stephone Anthony, Quandon, Tony, Spencer Shuey, Kellen Jones, Ben Boulware and T.J. Burrell – through the first six days of camp, I’ve seen a lot of really good football. They’re tough, physical, have good instincts. So it’s a good group.”

Boulware, a freshman from Anderson, SC, is pushing to avoid a redshirt despite a heavy veteran presence at linebacker, according to Venables.

“I can promise you this: He’s ready to contribute,” he said. “At what level? I don’t know. If there’s an injury, we won’t have any choice.”

One place a number of freshmen are pushing to avoid redshirts is in the secondary, although Venables admitted it was difficult to gauge any of the competitions since five players were missing Saturday.

Veterans Martin Jenkins, Garry Peters and Darius Robinson were out with injuries, as was touted freshman Mackenzie Alexander, who hasn’t practiced since the first day of camp after sustaining an injury in a “skills and drills” workout this summer.

Another freshman, Adrian Baker, was lost on the first series of the scrimmage with what Swinney said looked to be a sprained ACL that he hoped was not serious.

All the injuries left Breeland working on one corner for virtually the entire day, with Marcus Edmond, Ryan Carter and Jerrodd Williams rotating opposite him.

While the secondary was in shambles Saturday, Swinney said he felt good about the group overall, as Breeland, Peters and Robinson have all had good camps and most of the injured players should be returning soon, including Alexander.

“Mackenzie, we really feel like is going to be able to help us when we get him back going,” Swinney said.

Another area there is plenty of competition is the offensive line, where Swinney said so many players were moving around it was difficult for him to keep track of them.

“We’ve mixed and matched a good bit all through camp … but certainly by the time we come out of next weekend, I think we’ll have a pretty good idea of who it looks like is going to start this first game.”

Zac Brooks, who entered camp listed as the third-string tailback, is pushing to move up the depth chart after leading all rushers Saturday with seven carries for 79 yards.

The Tigers have a slew of backs competing for carries, including veterans Roderick McDowell, D.J. Howard and Brooks and freshmen Tyshon Dye and Wayne Gallman. Former walk-on C.J. Davidson has also impressed in camp and had 10 carries for 31 yards to make him the second-leading rusher Saturday.

Brooks, who has bulked up from 178 when he arrived on campus to 195 entering the fall, was pleased with his performance in the scrimmage, but knows he must consistently perform at that level to continue to push for more playing time.

“I’ve just got to keep going up; I can’t have any drop-offs,” Brooks said. “I give credit to our defensive line because they have no drop-off at all. It’s like an attack. So I’ve got to step it up, and all of us as backs have to step it up.”

Swinney said the scrimmage went “just over 100” snaps, including some goal-line work outside of the regular run of play.

With the team having practiced eight of nine days since camp began, Swinney gave the team a well-deserved day off Sunday, although they will still have meetings.

“We don’t ever go six days in a row with the type of contact we’ve had,” he said, “but that’s what camp is all about. We’ve got a lot of work to do to get ready to play three weeks from today.”