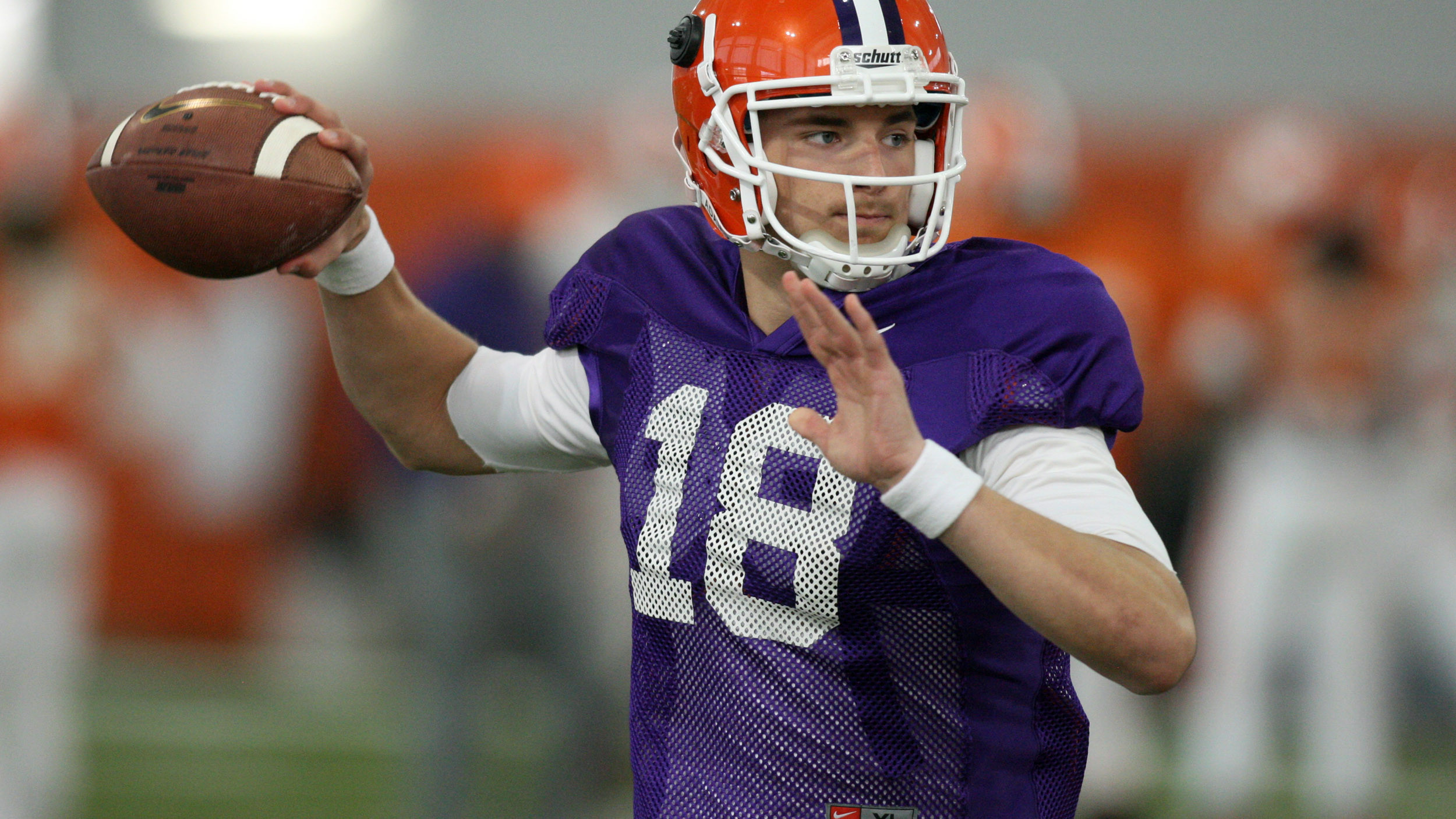 CLEMSON, SC – Clemson won’t hope to see its first-team offense take the field without Tajh Boyd under center too often this fall, but it got a chance for a sneak preview of that scenario Tuesday.

With the first-team All-America quarterback back in his home state of Virginia to receive a prestigious award, junior Cole Stoudt and redshirt freshman Chad Kelly split the first-team reps as the Tigers held their sixth of 15 sessions of spring ball inside their indoor practice facility.

“I thought they did really well,” offensive coordinator Chad Morris said afterward. “Both of them had some really good throws and obviously had some breakdowns, which is to be expected, but I was pleased with them both.”

Boyd, who was being honored at the Norfolk Sports Club Jamboree with the General Douglas MacArthur Memorial Award as the top athlete in the country who attended a Virginia high school, accounted for 4,410 total yards and 46 touchdowns en route to being named ACC Player of the Year last season.

As his backup, Stoudt played in eight games, but threw only 39 passes, completing 27 of them for 212 yards and three touchdowns against one interception. While he was successful enough in his limited action — his 69.2 completion percentage was actually better than Boyd’s 67.2 — Stoudt admits motivation did not always come easily knowing he was unlikely to play in a meaningful situation barring an injury.

According to Morris, that was plenty evident in Stoudt’s performance going back to last spring: “He didn’t have the focus, he didn’t have the drive that he had his first year, and he lost a lot of ground.”

But after one particular conversation with his father, Cliff, who played in the NFL from 1977-89, Cole says he entered this spring with a renewed sense of purpose.

“I’d say this has been the best I’ve played in awhile,” Cole said. “I’ve just been a lot more motivated, and I’ve gotten my confidence back that I had in high school. This is my third year in the system. I’ve got it all down and am still learning more.

“It’s just a lot of fun out there. This team is going to be really good, and it’s just a nice flow that we’re all having.”

Stoudt, who changed his jersey number from 8 to 18 — his high school number and the number his father wore during his gridiron days — came to Clemson from Dublin (Ohio) Coffman High School, where he broke the career passing yardage and touchdown records that had been held by former Notre Dame quarterback Brady Quinn.

After biding his time for two seasons, Stoudt might have seen the light at the end of the tunnel in terms of becoming the starter when Boyd considered going pro after his junior season. But even when Boyd announced he would return in January, Stoudt says he was “happy that he did” and insists he never considered transferring.

“I don’t think there’s any other place like Clemson,” he said. “I’ve loved it ever since I’ve been here. The coaches are great. Being around these coaches is like another family. Before my parents moved down from Ohio, Clemson is all I had, so whenever I had to go talk to someone it would always be the coaches. I don’t think I could ever leave. Even after college, I might just stay in Clemson.”

But Stoudt knows that even when Boyd departs, he is not guaranteed the starting job. Kelly, a ballyhooed prospect who played in the Under Armour All-American Game after his senior season at St. Joseph’s Collegiate Institute in Buffalo, N.Y., has pushed hard for the backup job, and Morris said the battle is nowhere near being settled.

“It’ll be neck-and-neck all the way through fall camp, in my opinion,” Morris said. “I hope they push each other because they’re making each other better, and it makes us better. The future with these guys right here is really good.”

And the coaching staff got a preview of that future Tuesday, as Stoudt and Kelly took turns directing the first-team offense.

“Coach (Dabo) Swinney talks about when you have your opportunities, you’ve got to go in and perform,” Stoudt said. “So, when you practice with the (first team), you’ve got to do your best so that Coach Swinney and Coach Morris know that if something happens they could rely on you to go in.”

Stoudt’s current focus is simply earning the right to be the one relied upon to do it.