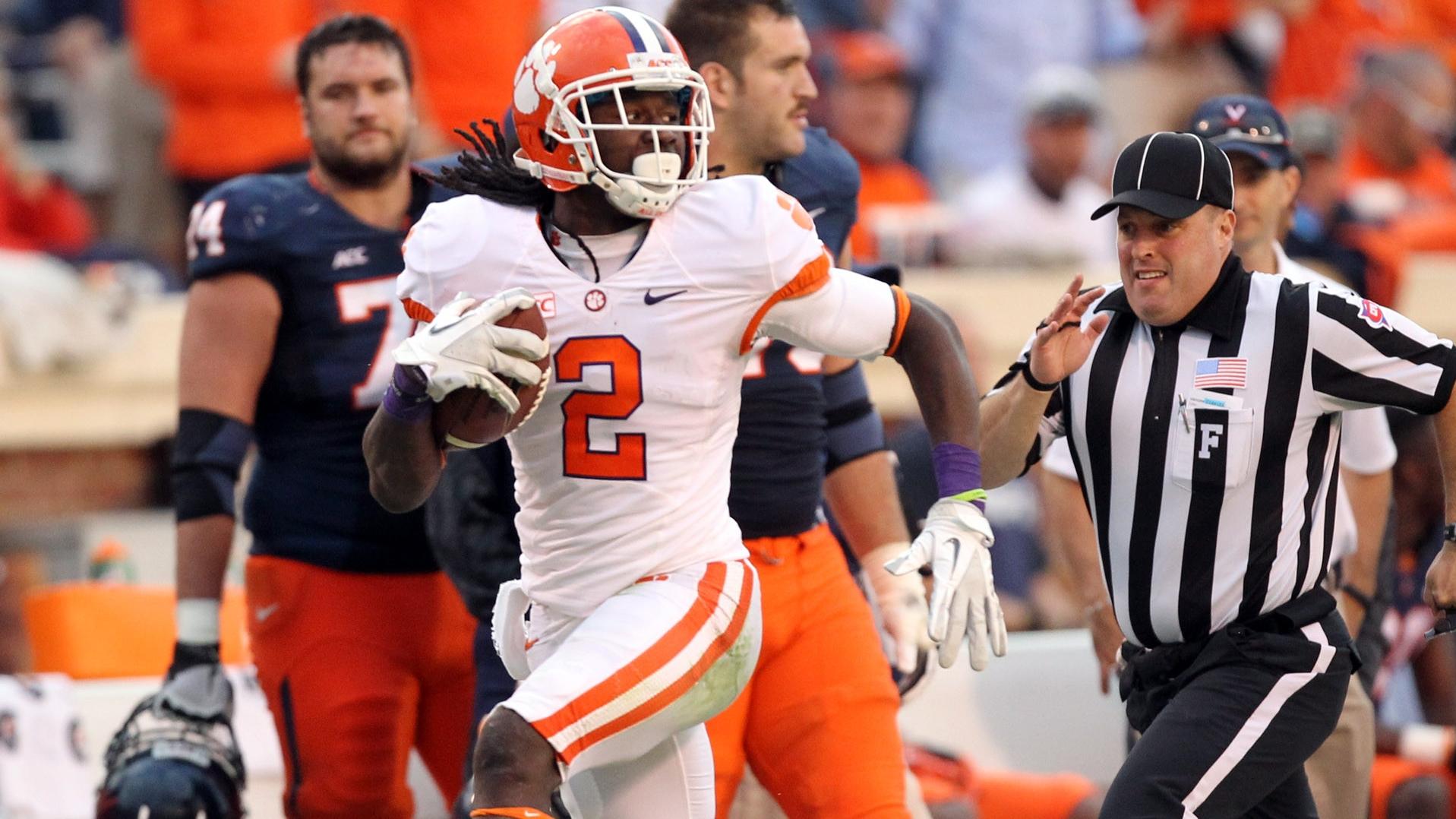 CLEMSON, SC – After putting on probably the greatest receiving performance in Clemson history in the Orange Bowl, Sammy Watkins was asked if he’d consult his coaches and family about whether to forgo his senior season for the NFL draft.

“It will be a real short conversation, if he’s going to talk to me,” Tiger head coach Dabo Swinney interjected to raucous laughter.

Truth be told, although he gave noncommittal responses for weeks about his future in order to keep the focus on the team, Watkins’ departure for the NFL had been all but a foregone conclusion for some time.

It even became a running joke between him and his head coach.

Watkins made his decision official with a news release Monday, and Friday, he met with the Clemson media for one last time to express his gratitude to his coaches, teammates and fans.

“I want to thank this community and all these fans for standing behind Clemson and being all in,” Watkins said. “It’s been a pleasure being here these last three years and growing as a young man. I think I have maximized my opportunity here for my three years, and I thank everyone on the staff. Clemson Nation did a great job of supporting me. Go Tigers.”

Watkins admitted that he didn’t even submit paperwork to the NFL Draft Advisory Committee to ascertain a draft grade, as it was pretty clear to all involved that he is certain to be selected early enough to warrant his decision.

“Of course, different agents reach out to you through text or phone and said that you’ll be in the top 10, but I don’t pay attention,” he said. “The only thing I can do is control what I do from here on out through the draft and work my hardest and prove to the NFL scouts and GMs that I can be a dominant player and also a good guy and a good man off the field.”

And he was certainly both of those things during his time at Clemson.

Watkins leaves as the school’s record holder in receptions and receiving yards on a game, season and career basis. Even though he played just three years, he set 23 school records.

Of all his records, Watkins said being the only player in the country with two catches of at least 90 yards this season – a 96-yard touchdown at Virginia and a 91-yarder at Syracuse – was the “highlight of (his) career.” He also had touchdowns of 77, 64, 48, 44 and 41 yards as a junior.

Watkins put an emphatic exclamation point on his career as he was named the Most Outstanding Player of the Orange Bowl. He had 16 receptions for 227 yards and two scores in Clemson’s 40-35 win over sixth-ranked Ohio State.

Once the game was over, Watkins admitted it sunk in quickly he had played his last game as a Tiger.

“I didn’t want to cry in front of everybody, but once I got in the locker room, I got kind of sad when I was hugging the coaches and things, knowing that it was going to be my last game,” Watkins said. “It was a good moment, but also a sad moment – knowing I won’t be able to catch the ball from Tajh (Boyd) and knowing I won’t have the great coaching staff and guys that cared about me. I think the NFL is totally different from college. It’s more a business there, and missing that family atmosphere is going to be hard on me.”

Watkins said he will now turn his focus toward training in Tampa, FL, for the draft. He still has a semester and a half left to finish his degree in Communication Studies and said he plans to return in the offseasons to complete his undergraduate work.

After Clemson’s offense sputtered during a 6-7 season in 2010, Swinney repeatedly reminded everyone that “help is on the way.”

He was specifically referring, of course, to Watkins, who became just the fourth first-year freshman in NCAA history to earn AP First-Team All-America honors, joining Herschel Walker (1980) of Georgia, Marshall Faulk (1991) of San Diego State and Adrian Peterson (2004) of Oklahoma.

Watkins finished his career with 240 receptions for 3,391 yards and 27 touchdowns. The first two totals are Clemson records and the touchdown total tied that of former teammate DeAndre Hopkins, who is now with the Houston Texans of the NFL.

More importantly, the Tigers had a 32-8 mark during Watkins’ time on campus and capped his career with the school’s first BCS bowl win.

“I don’t think if I would’ve gone to any other university, I would’ve gotten what I got at Clemson,” he said. “I not only got football, but I met a great group of guys that came from different places. We had one common goal, and I think we accomplished a lot in these three years. This program has been growing since I got here, and the coaches have done a great job of creating a culture.

“I think Clemson is going to be great for a long time. Coach Swinney and the rest of the staff do a great job of preparing us not just for football, but for life.”