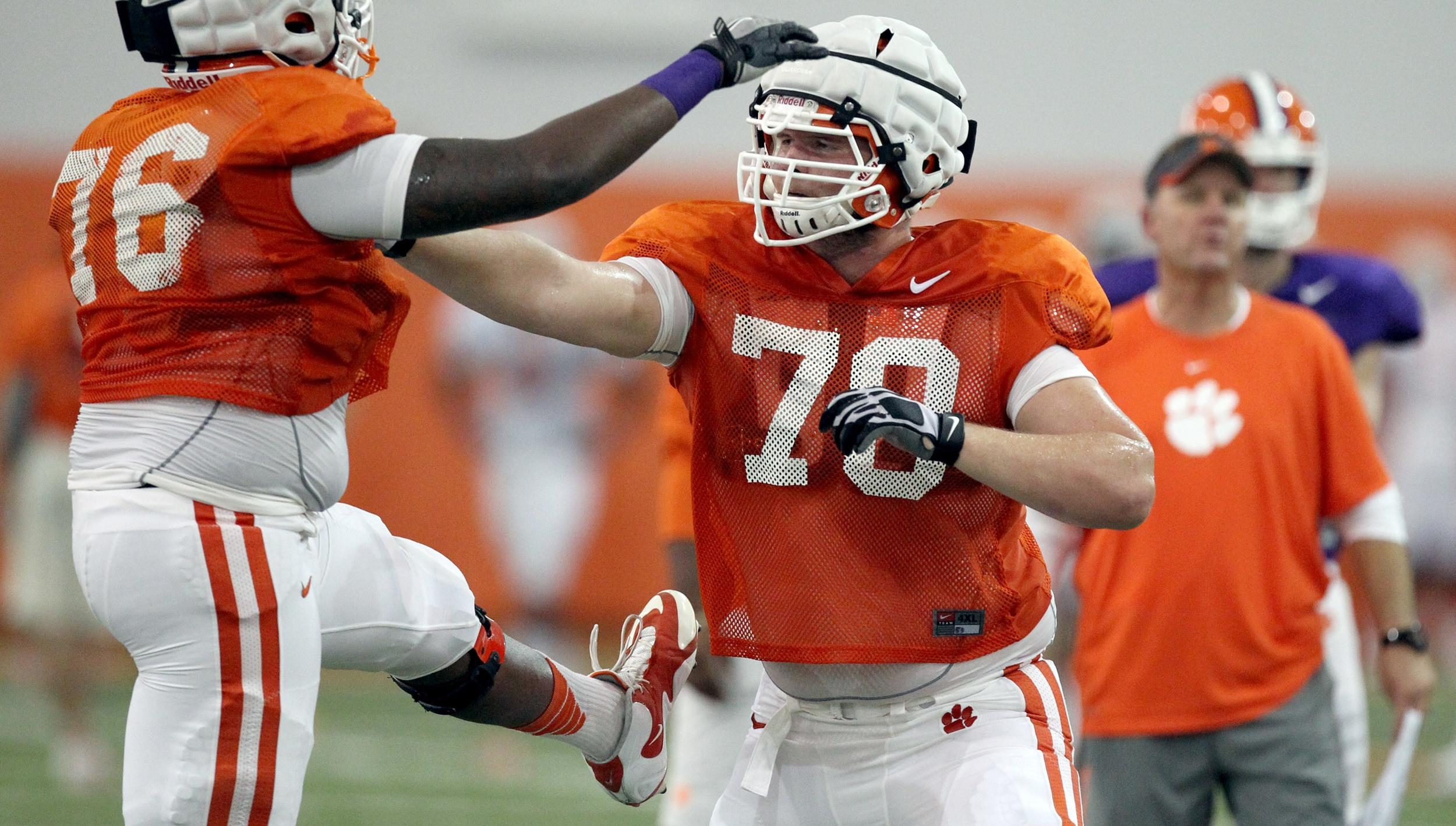 CLEMSON, SC – When Chad Morris met with the media Friday after the first of two Clemson practices on the day, he held a hand-written note that read, “Fatigue makes cowards out of everybody.”

Sounds like the third-year offensive coordinator has been testing that theory out on his offensive linemen.

“We’re far from being the ol’ Hogs of the Redskins right now,” he said. “We know as a coaching staff where we want to be, and we’re not there yet. We’ll know when to let up – and this isn’t any let-up time. This isn’t happiness camp.”

Historically, such a scenario has been an indicator of success. Clemson has won 75 percent of its games when it returns at least four starters up front – a significant increase over its 59 percent all-time win rate.

But just because four starters return doesn’t guarantee them that designation come Aug. 31, when the Tigers open at home against Georgia, according to Morris. “If there’s a guy that’s having as good a camp as anybody, it’s Tyler Shatley,” he said. “That guy is solid. I’m very proud of him. Outside of that? Not really. I think they all need to feel a little bit on edge right now.”

If Shatley has solidified his spot at left guard, Morris made the rest of the line sound as if it is playing musical chairs, moving players around in hopes of finding the best combination with nobody else assured of a particular seat or even having one.

Among the players moving around is sophomore Eric Mac Lain, who opened camp listed as the second-team left tackle, but has also been working inside at left guard. “We have a lot of puzzle pieces,” Mac Lain said. “I think that the competition is really healthy, and we’re working really hard.”

Mac Lain is listed at 260 pounds on the roster, but said he is actually tipping the scales at “300 even.” Having just made the transition from tight end to lineman, he insisted he is happy to be working at both tackle and guard, and doesn’t prefer one or the other.

“Just wherever I can play earlier,” Mac Lain said. “(The goal is) to just get on the field and help the team anyway I can.”

The fact Mac Lain is also working inside could be viewed as a positive sign as far as the development of Isaiah Battle, who came off the bench at tackle for Giff Timothy in the Chick-fil-A Bowl against LSU and held his own against the Bayou Bengals’ ends, both of whom were drafted by the NFL. He played 153 snaps for the season, but 73 of them came in the LSU game.

Despite that performance, Battle came into camp listed as the third-team left tackle. “They say they want me to take the job,” said Battle, who said he currently weighs 275 pounds, but wants to get to 285. “They just want me to keep consistent and show that they can really trust me in the game.”

Another place the competition is tight, perhaps surprisingly so, is at center, where Ryan Norton and Jay Guillermo are battling to fill the void left by four-year starter Dalton Freeman.

“We’ve had a good competition going there, but we’ve had a couple of problems with some high snaps,” Morris said. “I think we’ve got some guys thinking a little too much, but we’re getting all that straightened out. It’s a decent battle going on there, but we’d still like them to push each other a little bit harder. I don’t want one of them to think there’s any sort of pecking order, and I think they kind of think there is – and there’s really not.”

Kalon Davis and Reid Webster have been drawing reps at both left and right guard, according to Davis, whom Morris said has been “a little bit of a surprise” in camp.

“He looks good one day, and then one day he doesn’t. He needs to work on his consistency, but we’ve seen some really good things out him.” Davis played 166 snaps at guard last year and has played 23 games over the last two years. He entered camp listed as the co-starter with Beasley at left guard.

“You have to have a football mentality every time you come to practice,” Davis said. “It’s easy to get away from it. I probably got away from it (Thursday), and I had a rough day. Right now, you just have to be there all the time with your mind ready.”

Asked about Morris’ stated desire to make sure his players don’t confuse fall camp with “happiness camp,” Davis said he believes happiness is still a possibility.

“You’ve got to come out here and compete,” Davis said, “and the more you compete, the happier you’re going to be.”