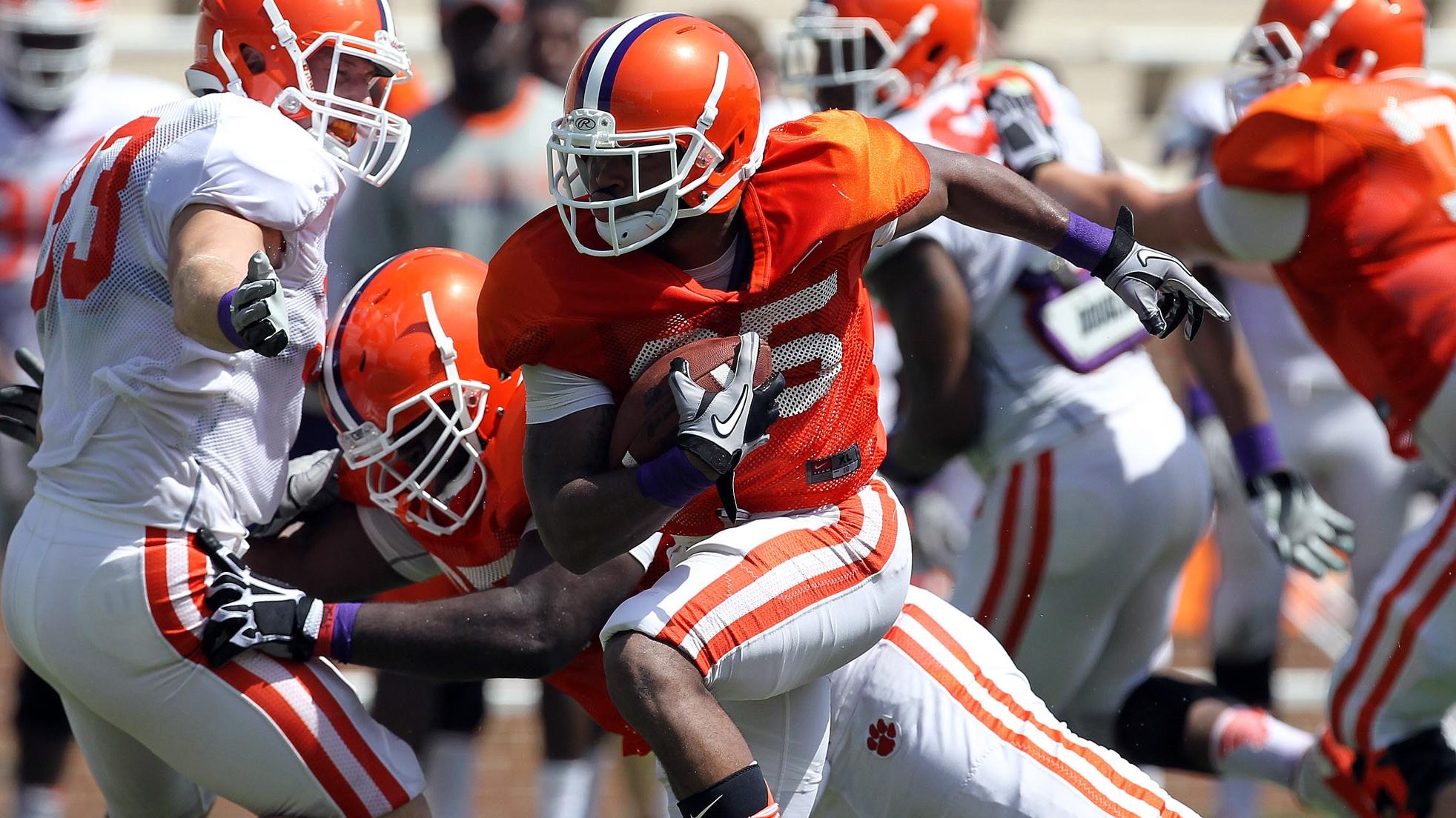 CLEMSON, SC – Roderick McDowell subtly raises his arms away from his sides to show his commitment to Clemson’s football program.

The senior running back now tips the scales at “200-something” pounds – a far cry from his weight upon arrival on campus in 2009 – and he used the gesture to offer visual proof of that transformation.

“Buying into the program means living right on and off the field and listening to the coaches, staying in the weight room 24/7,” he said Tuesday. “I came in at 160, now I’m 200-something pounds, so that shows a lot right there. I’ve learned the offense and improved my skills as far as pass blocking, as far as running the ball harder, as far as making cuts, so that’s really buying into the program.”

All that hard work has paid off.

McDowell has been named the Tigers’ starting running back as the team wrapped fall camp Tuesday. It will take Wednesday off for the first day of classes and then begin its regular practice schedule Thursday as it prepares for the August 31 season opener against Georgia.

“Hot Rod has definitely developed the consistency and earned (the job),” offensive coordinator Chad Morris said. “He has had a very productive camp. He has gotten better and taken a lot of pride, and obviously the reps that he got last year in the critical game situations have really helped him out and put him ahead.”

There was a time when McDowell couldn’t necessarily see the light at the end of the tunnel that is the Tigers’ running back depth chart.

After carrying just 14 times as a sophomore in 2011 – 18 fewer carries than he had gotten as a redshirt freshman – McDowell began to question his future at Clemson, and he called his mother to tell her as much.

“My mom told me, ‘Rod, you wanted to come here. You stick it out,'” McDowell said. “And it also boiled down to me wanting a degree too. If I get a degree from Clemson, that means more than anything. And, hey, look where I am now: I’m the starting running back.”

Behind McDowell, Morris said Zac Brooks has claimed the second-string spot, while former walk-on C.J. Davidson is third on the depth chart with another veteran, D.J. Howard, having had minor ankle surgery Monday.

“C.J. has definitely made a great push and is going to get some quality playing time,” Morris said. “So we’re excited about those three (McDowell, Brooks and Davidson). D.J. has been a little inconsistent. We’ve got to get him back fully healthy and get him going. But those are the three guys there that you are going to see a lot of.”

Davidson has been one of the pleasant surprises of fall camp. He is a former member of the Clemson track and field program who once finished ninth in the long jump at the ACC Indoor Championships.

Before that, however, he was a standout running back at nearby Daniel High School, where he was a teammate of a host of current and former Tigers, including recent NFL first-round draft pick DeAndre Hopkins.

“C.J. has incredible speed, incredible cuts,” McDowell said. “People think, ‘Oh, he’s a walk-on.’ No, he’s a running back. He can really contribute to this offense.”

While there has been plenty of competition for positions and shuffling of spots, the status quo ultimately won out. Four of the five were starters at their positions last season, and Norton entered camp atop the depth chart at center after four-year starter Dalton Freeman was lost to graduation.

“Those are kind of the five that have come out and had the most consistency through camp,” Morris said. “By all means, just because we think those are the five today doesn’t mean that will be the five that we put out on the field on August 31. It’s a day-to-day grind for those guys, and we’ve got some guys behind them that are pushing them and creating competition, which is what we need.”

As for McDowell, he believes he’s capable of handling a similar load to the one Andre Ellington carried last season when he ran the ball 212 times for 1,081 yards.

McDowell actually had a better per-carry average (5.4 yards) than Ellington (5.1), and believes his bulked-up frame will help him achieve similar production.

“I feel like it goes back to Coach (Joey) Batson,” McDowell said. “I feel like we’ve got the best weight room coaching staff, and he really pushes us.”

But while McDowell is eager to carry the load for the Tigers, he knows his mates in the backfield will also need to contribute heavily if the team’s ground game is to be successful.

“I can’t do it by myself,” McDowell said. “I’m going to need Zac, D.J. and all of the rest of those boys because what keeps me going is when I’ve got a good stable of backs pushing me 24/7. That’s a tradition for the running backs here.

“Andre was good because he had me and D.J. pushing him; C.J. (Spiller) had Andre and Jamie Harper pushing him, so I feel like it all goes back to who’s behind you.”

And McDowell’s commitment has allowed him to finally get his chance as the guy who has others behind him.