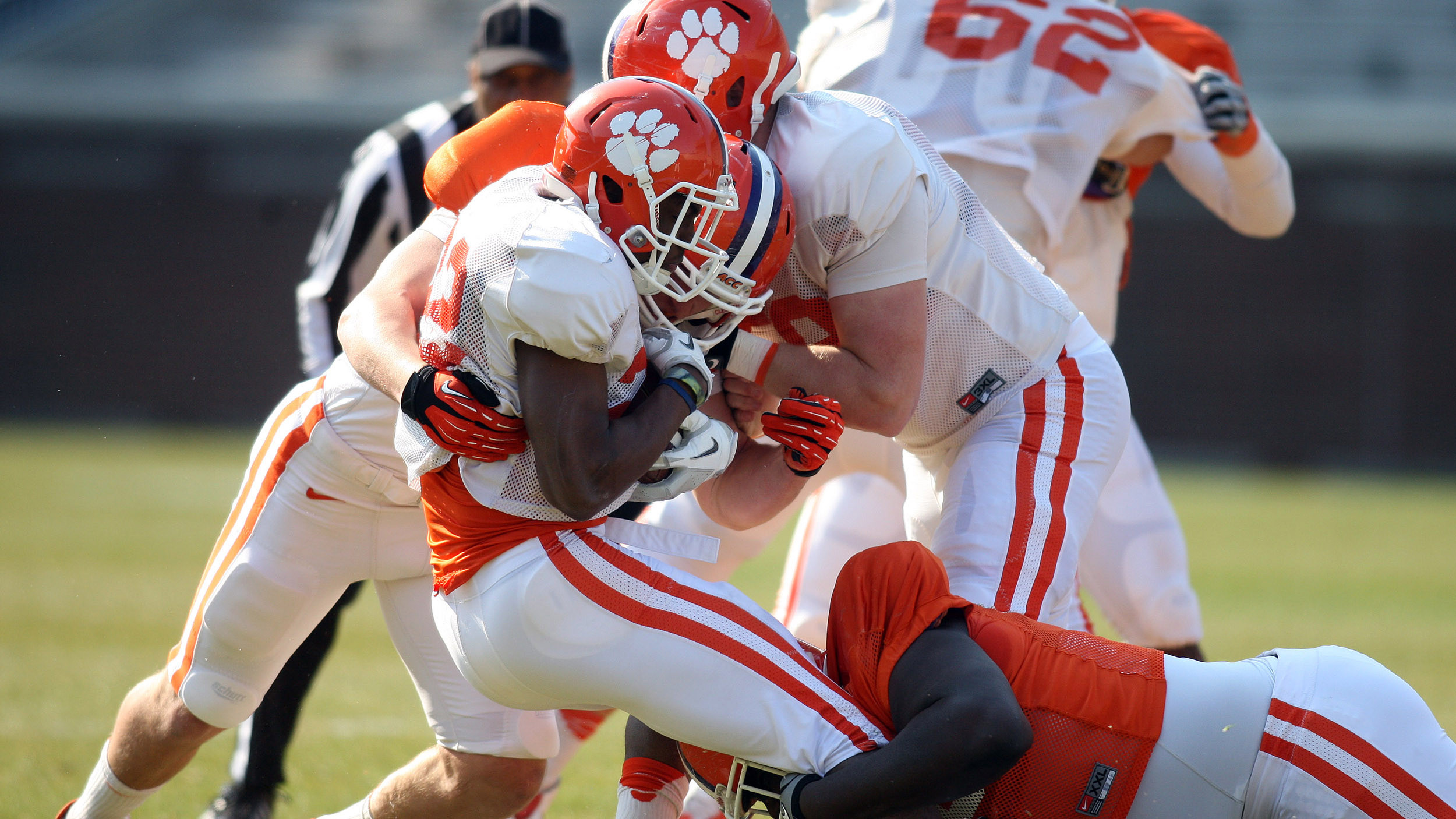 CLEMSON, SC – Clemson held its first scrimmage of the spring Wednesday in Memorial Stadium, and Dabo Swinney says the defense is much further along than at this point last year.

“It’s just night and day from where we were the first scrimmage last spring,” he said.

“We actually played really well,” said Shuey, the team’s top returning tackler with 93 stops last season. “A lot of things came together from the first couple practices and obviously there were a few mistakes, but I feel like – especially the first group – everyone’s getting a good feeling for it, and we’re actually executing pretty well.”

Shuey has been playing primarily the WILL linebacker position after finishing last season as the starter at MIKE, which is now being manned by Stephone Anthony. Quandon Christian is back at the SAM to complete the starting unit.

“Really all those backers have been very, very solid,” Swinney said. “We have a really good group between Quandon, Shuey and Stephone, and Tony Steward, Kellen and B.J. Goodson. So that’s a really good core group that we’ve got to work with.”

Shuey echoed his coach’s belief that the linebacking corps would be much improved.

“We’ve been able to build a lot of depth at linebacker, and have a lot of people who have a good understanding of the defense,” Shuey said. “I definitely think an extra year in the system has helped us out tremendously, and we’re all communicating.  We’ve already had a lot of improvements from this time last season.”

The defense held first-team All-America quarterback Tajh Boyd to 5-15 passing for 55 yards and a touchdown and also picked him off once, while Cole Stoudt and Chad Kelly fared better. Stoudt completed six of nine passes for 113 yards and two scores and was also intercepted once, and Kelly was eight of 14 for 71 yards and two touchdowns.

“Our quarterbacks were solid,” Swinney said. “I thought Cole was incredibly confident, and Chad came in and did some things and Tajh made some nice throws. Nick Schuessler went in and took his team down for a score. So, all those guys played well.”

Former track athlete C.J. Davidson was the leading rusher with seven carries for 70 yards and a touchdown, while Rod McDowell had five carries for 58 yards.

“The backs ran hard,” Swinney said. “Zac Brooks and Hot Rod and D.J. (Howard) all had some flashes.”

Redshirt junior walk-on Andrew Maass was the leading receiver with four catches for 75 yards and a touchdown, and junior Martavis Bryant had three grabs for 48 yards and two scores.

“Leggett is a guy that has kind of caught my eye,” Swinney said. “He has a lot of poise to him for a high school senior. He’s very athletic, and he’s bigger than he was when we recruited him. He made a couple of nice catches today, and he’s really been very consistent throughout the spring.”

The Tigers will return to the practice field Friday for their ninth of 15 sessions of spring ball. They have two more scrimmages remaining this spring, one set for April 8 and the other being the Spring Game on April 13 at 4 p.m.

“This was a big day,” Swinney said after Wednesday’s scrimmage. “This was kind of the halfway point. We’re entering into the second half of spring ball, so I was pretty anxious to see them.”